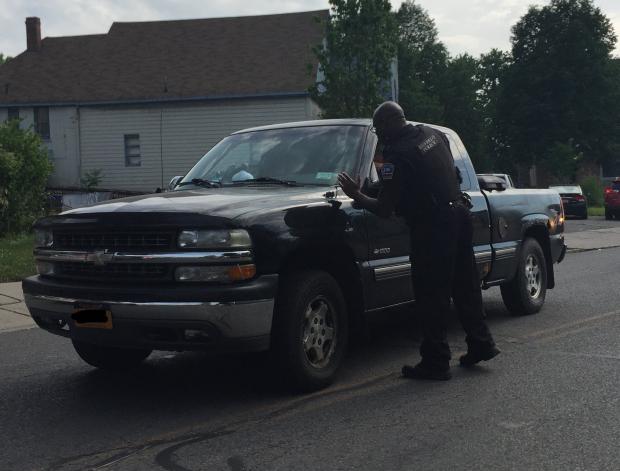 When we first started reporting on the Buffalo Police Department’s use of checkpoints throughout the city, we confronted two main questions: Are the checkpoints constitutional and are the locations of checkpoints discriminatory against minority populations. The first question, answered in part in some of our reporting, has been asserted in a formal complaint to the New York Attorney General Eric Schneiderman on behalf of Black Lives Matter. The second question was answered in part last Tuesday when the Buffalo Common Council released checkpoint data for the year, beginning on January 1, 2017.

And the answer is yes, BPD’s checkpoints disproportionately target African-American neighborhoods. In Council districts North and Lovejoy, approximately 85 percent were in communities of color.

While such discrimination was long suspected by observers and advocates, Common Council President Darius Pridgen announced last May he would be seeking to answer this question. At first, BPD only offered slices of real-time information. They gave WGRZ data for the first week of July 2017. In September, they gave the Common Council data for August and September. But the historical data was missing, even as legal advocacy groups sued the city to release that information, and it still is. But let’s look through the cloudy window that the BPD and Common Council have offered us.

For reasons of “officer safety,” actual locations of checkpoints have not been released. Instead, the locations are given by Council district quadrants. Council districts come in irregular shapes, shaped by politics, and the quadrant information makes the data difficult to comb for potential bias by neighborhood. Take Dave Franczyk’s Fillmore District, for example, which contains most of Allentown, all of the Old First Ward, and then stretches out all the way to Broadway and Bailey.

Yet the data is riddled with red flags.

First, let’s look at Delaware District. Before this year, many residents of Delaware District probably never knew what a BPD checkpoint was. Home to Delaware Park and the city’s highest property values, the district is between 75 and 80 percent white, according to census data. There were 70 checkpoints conducted this year until Delaware District came up snake eyes on March 21, which coincidentally was the day that began a trend of multiple checkpoints in a day. Delaware had the lowest tally for checkpoints.

The second red flag is the data concerning North District. There’s little chance you’ll run into a checkpoint on your way to Target or Wegman’s, but if you’re visiting family in the Schaffer Village apartments on Ontario Street, it’s a different story. The district is split pretty clean east and west by the railway corridor the runs parallel to Military Road. Most of the district is shared by one ZIP code—14207—so while it’s trickier to derive demographics on either side of the tracks, most of its 35 percent minority population are concentrated in the westernmost sections of the district along Niagara and Ontario streets. The newest checkpoint data reveals that there were 65 installations in North so far this year, and all 65 have occurred in the northwest or southwest quadrants. The eastern side of district, from roughly Buffalo State College on Elmwood to the Target plaza near Kenmore, hasn’t seen a single checkpoint this year.

Furthermore, 54 of these checkpoints occurred after July 1 when Buffalo Police were coming to terms with the reality that they would have to disclose checkpoint data and that Pridgen was concerned about racial disparities.

The third flag is Lovejoy District, the Council district with the most number of checkpoints during the data period, with 92. Lovejoy is also divided by a railway corridor north and south, but conveniently, for our purposes, that divide also roughly correlates to ZIP codes. In the north, 14211 is 85 percent black. In the south, 14206 is 85 percent white. Of the 92 checkpoints, only 25 were held in the southern half of the district.

North District Councilman Joseph Golombek and Lovejoy District Councilman Richard Fontana, who are both white, have spoken favorably of the checkpoints in media reports. “They realize it’s keeping the community safer,” Fontana told the Buffalo News. “I want to commend the police for using proper judgement.”

Emails sent on Tuesday morning to Councilmen Golombek, Fontana, and Pridgen, as well as to the Buffalo Police and the mayor’s office were not responded to in time for our print deadline.

Lieutenant Jeffrey Rinaldo, the BPD spokesman, and Mayor Byron Brown have recently said the checkpoints are for traffic safety. Yet a neighborhood like Parkside in Delaware District, which has been complaining about traffic safety issues for 40 years, may have never seen a single police checkpoint.

According to the data provided by the city, the gross yield for checkpoints are tickets for lapsed registrations, inspections, seatbelt violations, unlicensed operation, and window tint violations. Between September 21 and October 27 of this year, there were 43 checkpoints that yielded 11 misdemeanor arrests, two narcotics seizures, and hundreds of traffic summonses.

The citizens to whom Claudia Wilner of the National Center for Law and Economic Justice has been speaking about checkpoints are concerned about the location of checkpoints and the appearance that the city is shoring up its budget on the backs of its lowest-income residents. “The concerns that we have been investigating on behalf of community members is are the checkpoints being done in a discriminatory fashion in low-income communities of color,” Wilner said. This investigation, conducted in partnership with the Western New York Law Center, has opened a hotline to collect citizen experiences with Buffalo police checkpoints.

Wilner has also sued the city for checkpoint data going back years after the city refused to disclose that information. There is an “officer safety” exemption from Freedom of Information Law requests, but that exemption is typically only evoked in the case of sensitive investigations. “I don’t think this would be an exemption under FOIL,” Wilner told us. “For starters, they may be reusing the same locations, but these locations are already public and posted in real time as people report them,” she said, referring to a Facebook group which collects checkpoint alerts.

In prior years, Brown and the BPD were more transparent about their intent to use checkpoints as a crime deterrence tactic. The problem with that tactic is the constitutionality of searches and arrests that arise checkpoints, which may violate the Fourth Amendment. A chapter of Black Lives Matter in Buffalo is asking for the office of Attorney General Eric Schneiderman to investigate a pattern of Fourth and 14th Amendment violations by the BPD

Use of force in Kaisterown

Last spring, we reported on a narcotics raid in Kaisertown that led to a harrowing high-speed chase, which caused an accident involving a school bus and several other vehicles, and caused numerous injuries, none more severe than those to the driver, Antonio Gutierrez. Two witnesses we spoke to at the time claimed they heard a shotgun blast on the street a moment before police entered the house. They claimed Gutierrez, an acquaintance of theirs, had pulled up to return their car at the exact time of the raid and made an attempt to flee.

At the time, police explained the chase as justifiable because Gutierrez had run his car into an officer on the scene. That officer suffered minor injuries requiring follow-up with a physician for a “tender and sore arm.” What they never disclosed, however, was that police did in fact fire on Gutierrez before the chase even started. An investigation by Danny Spewak of WGRZ uncovered the truth behind the incident, after multiple FOIL requests were denied. “According to a Firearms Use report obtained by Spewak under FOIL, an officer “did fire one shot 00 buckshot at vehicle that had just struck narcotics detective,” Spewak reported.

Spewak concludes that the BPD routinely fails to properly disclose information about such incidents. “The Buffalo Police Department often alerts the public when an officer fires a shot, and it obviously tells the public when a suspect like Hernandez-Rossy is struck by police gunfire,” he reported. “But other incidents, like that shot fired at a suspect in March, would never have been brought to light if not for our request of internal documents. Our previous investigation in Nov. 2016 also revealed new incidents that had never been previously reported by the department.”