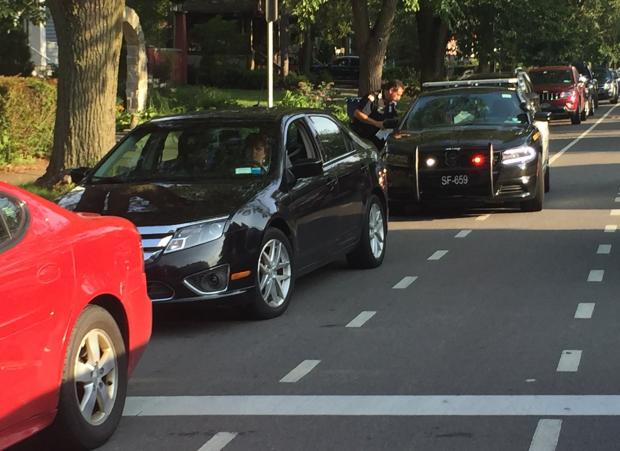 Since criticism has mounted over the location of Strike Force checkpoints, they have been more commonly seen in North Buffalo and the Elmwood Village, like this one on Richmond Avenue.
by
Aaron Lowinger
/ Aug. 16, 2017 1am EST

Almost two years ago, a Buffalo man pulled through a checkpoint at the intersections of Crowley and Rano streets in the city’s Riverside section. It was around 7pm, and as he pulled up to Buffalo Police Housing Unit Officer William Robinson, the driver was found to have an “open container of beer” in his lap. Robinson subsequently arrested the driver, who was unavailable to provide consent to use his name for this story, for driving while intoxicated.

During the subsequent suppression hearing, Legal Aid attorney Alexander Anzalone picked up on the rather haphazard organization of the checkpoint that ensnared his client. The checkpoint location and directive was kept in a binder by a lieutenant, accessible only to the lieutenant and communicated only verbally, against police protocol that calls for the directive to be distributed to all officers involved.

Furthermore, Officer Robinson and Lieutenant Lance Russo referred to the checkpoint as a “traffic safety” measure, yet neither could produce any documentation for the number of traffic violations that the checkpoint may have yielded, and Russo admitted under cross-examination that one of the reasons the location was selected was because of the “recent crime” in that area.

Anzalone argued in his motion that “’traffic safety’ is not a talismanic incantation, the speaking of which absolves the People of their burden in establishing, through reliable evidence, the primary purpose of the roadblock.”

City Court Judge Kevin J. Keane agreed with Anzalone, and ruled that police “failed to establish that the checkpoint was established and operated in a manner that complied with constitutional requirements.”

The BPD’s use of checkpoints has now been inserted into the city’s mayoral election calculus by the consistent work of activists across several organizations that have been asking city officials to review the practice, arguing that checkpoints occur primarily in minority communities and lack legal justification. The Riverside checkpoint case and decision offers several insights into the discourse we’ve been hearing.

So what is the justification for checkpoints? In 2014, Commissioner Daniel Derenda told the Buffalo News that the city chooses checkpoint locations based on crime data. “Our Strike Force officers are conducting daily roadblocks at multiple locations and surprising the criminal element. Because of that people are now less likely to carry guns knowing that they may be stopped at a safety checkpoint,” Derenda said.

Derenda’s 2014 statement is a contrast to what Mayor Byron Brown told WGRZ last month about the purpose of the checkpoints. “The purpose is traffic safety,” Brown said. “We get a large number of complaints from residents throughout the city about speeding in neighborhoods, about vehicles that are blowing through stop signs and vehicles that are actually going through traffic signals. We know safe streets help to produce safe neighborhoods, and that is the reason for the traffic safety checkpoints.”

But as in the case of the Riverside checkpoint, the city doesn’t appear to be in the practice of accruing basic information about the checkpoints, possibly including locations of checkpoints, and what the police accomplished through them, despite BPD manuals clearly calling for the superior officer to record that information.

Last May, Buffalo Common Council President Darius Pridgen announced he would ask the BPD for more information on their use of police checkpoints. He said he wanted to make sure that their implementation was occurring equitably throughout the city, and not just on Buffalo’s predominantly African-American East Side, as some were arguing was the case.

Left with unanswered questions, Pridgen says he was assured that the BPD would begin to record such data at checkpoints. “I’m not satisfied, but at this point, I gotta go forward,” he said. Past checkpoint locations remain of interest to him, however, in the event that they were not being carried out equitably across city neighborhoods.

Pridgen says he will continue asking the BPD for this information. “At the next Police Oversight Committee, we will have this discussion,” he said. But he also added he’s heard from some block clubs who are asking for more police interventions in their neighborhoods, and who view the checkpoints favorably.

According to a section of the BPD manual revised in 2013 that was obtained by The Public, “The purpose of a checkpoint is stop motorists and to methodically evaluate their compliance with the law.” Crucially, the manual mentions a specific “Buffalo Police Department Traffic Checkpoint Form” that is distributed to the officers at a checkpoint and also states that the superior officer is to “document any such [illegal] activity in his/her activity report.” The activity report would presumably include all the information Pridgen is interested in viewing, with the location information, and would also presumably be the form that police could not produce in the case of the 2015 Riverside DWI arrest.

We have also obtained a copy of that 2015 Riverside checkpoint “roadblock directive.” The location information is included; what exactly the officers did at the checkpoint, however, was not.

There have been previous indications that the BPD has disproportionately focused its checkpoints on the East Side. In a 2016 study on the impact and utility of Buffalo Police checkpoints, researchers looked at 60 daily checkpoints conducted in April and May of 2013. There were a total of 46 locations used in the study, with some locations used two or even four times. There was one location in South Buffalo near South Park and Hopkins, four on the West Side (near Niagara and Vermont, West Ferry and Grant, Massachusetts and Lawrence, and Grant and Potomac), two in Riverside (Military and Hertel, Ontario and Tonawanda), and one at Seneca and Babcock. The other 38 locations were on the East Side.