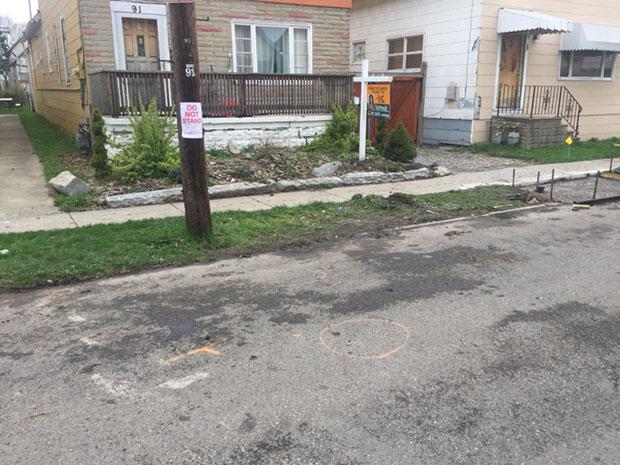 On March 29, 20-year-old Antonio Gutierrez led police on a high-speed chase through the late afternoon traffic on Clinton and Seneca streets. The chase ended in carnage outside the Seneca-Babcock Community Center. Images taken of the aftermath show gnarled, unintelligible vehicles, their missing pieces scattered over the street. A school bus full of kids was among the wreckage—one child suffered minor injuries. The driver of another car suffered serious injuries. Gutierrez himself was critically injured and remains hospitalized.

The Buffalo Police Department’s version of the events that precipitated the chase differ starkly from the version of events told to The Public by two occupants of the home in Kaisertown where it began. The two witnesses—subjects of a drug raid—believe Gutierrez happened on that raid as he pulled up in front of their house, saw men in civilian clothes with guns, and tried to leave. They say police fired at Gutierrez before the chase even started.

Buffalo Police have said from the beginning that the chase was justified. In his explanation, BPD spokesman Lieutenant Jeffrey Rinaldo read from the BPD’s manual, which states police chases “shall be limited to those circumstances in which the life or safety of any person is in imminent danger, or in which the person being pursued is suspected of having committed a violent felony.” The violent felony Gutierrez is accused of committing on March 29 was clipping the arm of a police officer while pulling away in his car. A day after the raid, Rinaldo told the Buffalo News that the officer Gutierrez hit would have to follow up with a physician for a “tender and sore arm.”

Felicia Canterbury was in her home at 91 Weiss Street on that Wednesday morning. Her nine-month old baby was sleeping. Downstairs, her boyfriend William Fish was looking after Canterbury’s five-year-old daughter. Canterbury heard a loud blast and looked out the window. She saw about a dozen men in the street, one holding a shotgun at the 2005 Honda Pilot she and Fish had recently purchased from Gutierrez. Gutierrez, they say, had borrowed the vehicle and was coming to return it just at the moment that Buffalo Police were preparing to raid Canterbury’s house.

Canterbury said the officers arrived in one squad car and several unmarked cars and none of them wore a uniform. Fish guessed that Gutierrez saw the men and the guns and, whether he knew they were cops or not, made a snap decision to flee. While backing up his car, he struck an officer’s arm, according to Canterbury, and Canterbury says she heard an officer say, “Shoot that n*****.”

Downstairs, Fish said he stepped on to his front porch shortly after hearing the shotgun blast with his arms raised, hoping to shield the children inside from any danger. He says he announced to the officers the location of his marijuana. When his dog, an American Staffordshire Terrier named Caesar, followed him on the porch, the police shot and killed him on the spot, in view of Canterbury’s daughter.

A month of heavy rains later, two orange paint circles still mark the street where Matt Albert believes the shotgun shells fell. Albert is representing Canterbury in the resulting criminal case and in a civil suit they intend to file against police.

According to the warrant allowing police to conduct the raid—obtained by Albert and shared with The Public—the basis for the raid was marijuana. Based on the charges filed, police could not have found more than two ounces of marijuana on the premises. Fish claims it was about 10 grams. Fish and canterbury were also charged with possession of half a gram of cocaine and paraphernalia. Listed on the paraphernalia charge are scales, baggies, and Enfamil “used in the cut.” Albert noted that there was a nine-month old in the house and said, “If you have two lines of cocaine, you’re not cutting it with Enfamil.”

The oddities in the police paperwork that sanctioned the raid don’t end there. The warrant, signed by City Court Judge Amy Martoche, is based on information from a confidential informant. That informant told police the weed dealer in question is a “medium complected male, described as being approximately 5’11, and weighing approximately 180 pounds, approximately 30 yoa with light facial hair.”

The lack of real specifics in the description of the subject of a warrant allowing a no-knock raid confounds Albert. “Complected isn’t even a word,” he told The Public. “A judge is allowing a home invasion based on gibberish. You got a heroin epidemic of biblical proportions and you got these guys going full Rambo for a few plants of weed.” No-knock warrants have become a favored tool by law enforcement and local judges, even though local research has found them ineffective, and the ACLU and Cato Institute have both criticized their widespread use.

In the hours after the raid, Fish said he felt the police were figuring out that they had raided a home, instigated a police chase that resulted in multiple injuries, and killed a dog over a small amount of marijuana and a tiny amount of cocaine. No weapons or cash were seized, according to documents provided to The Public by Albert. According to both Fish and Canterbury, a police lieutenant told them at the scene that if they tried to sue, they wouldn’t be around to collect the settlement money.

Albert believes police have been making good on that threat since Canterbury’s first court date, when they noticed him representing her. Although she had not been charged with child endangerment the day of the raid, within days of Albert appearing in court, Child Protective Services became involved and placed the children with alternate caregivers. Canterbury claims she has been stopped and searched by police since the raid. “They’re out for blood on this and they’re using every trick in the toolbox to intimidate these kids,” Albert said.

Fish and Canterbury are adamant that shots were fired at Gutierrez on Weiss Street, before the chase began. When Canterbury first looked out the window, she claims to have seen him slumped over, as if he was already injured. This contradicts the BPD’s claim that police may have shot at Gutierrez’s vehicle during the chase, which police and observers claim reached speeds between 60 and 100 miles per hour.

The BPD has said that they have launched an Internal Affairs Division investigation into the incident. Fish and Canterbury say that police have not contacted them as part of that investigation.

“Should an East Side gang have shot someone’s eye out, injured children on a school bus, and blown up a family dog, all for minute quantities of cocaine and marijuana, US Attorney James Kennedy Junior and Erie County District Attorney John Flynn would be holding press conferences at City Hall, pounding their chests and stating how they were going to put all the young men responsible into prison for the rest of their lives,” said Albert in a prepared statement. “However, because these criminal had uniforms on, the above-named officials will toast champagne and eat rubber chicken with them at the next Police Benevolent Association fundraiser. Such is the police state that we have become.”