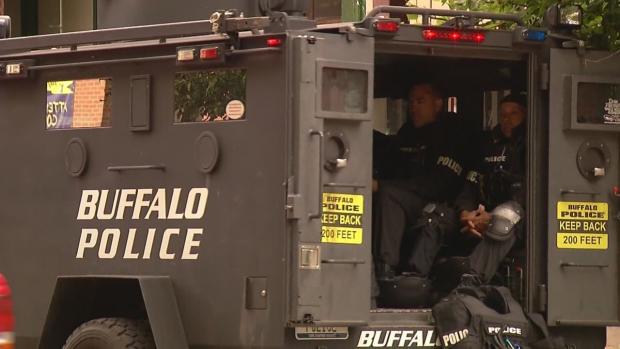 On September 28, a Niagara Falls police SWAT team of nearly 20 officers entered a home on 20th Street, acting on a “no-knock warrant” issued to them. The subject of the warrant was Stacey Lewis, a 33-year-old Niagara Falls man with a record of drug arrests. What exactly happened next is still unknown, but moments after the raid began Lewis was brought out of the home on a stretcher with a bullet in his torso. A bystander grabbed a cellphone video capturing him pleading, “Why’d y’all shoot me?” The Buffalo News reported that, at the time he was shot, Lewis was carrying an open box cutter and a cell phone.

Lewis’s injury occurred in the execution of police paramilitary unit (or PPU) raid, a practice that has become commonplace across the country as first the war on drugs and then the war on terrorism was outfitted with more equipment and larger budgets, thanks to across-the-board increases in law enforcement spending.

In Buffalo, PPU raids have become part of the Buffalo Police Department’s overall “zero tolerance” policy, which prioritizes show-of-force response to low-level quality-of-life and drug complaints, theoretically as a deterrent to more serious crimes. But despite the resources put into such raids and the attention-grabbing headlines they engender, a recent study released by local researchers concludes that the raids have almost no deterrent effect on crime, and national studies argue that such raids place both citizens and police at risk.

In Buffalo, raids have become such a common facet of the Brown administration’s public relations that each initiative receives its own name. In June 2012, the BPD launched a two-day effort called “Operation Street Sweeper,” executing 100 search warrants that yielded 76 arrests, 16 guns, and a small quantity of drugs. A Valentine’s Day effort in 2011 called “Operation Heartbreaker” produced similar results: 101 warrants, 54 arrests, 11 firearms.

With each raid, Mayor Byron Brown and/or Police Commissioner Daniel Derenda praise the efforts. After “Operation Power Sweep” in September 2012 (103 warrants, 63 arrests), Derenda was quoted thusly in the city’s press release: “This is the continuation of the mayor’s zero tolerance policy which ultimately helps rid neighborhoods of illegal activity and ensures a better quality of life for residents city wide.”

A study of “Operation Street Sweeper” was recently published by two Buffalo State professors, Dae-Young Kim and Scott W. Phillips, and University of Texas at Dallas professor Andrew Wheeler, who investigated the impact of PPU raids. The researchers report that the city used crime statistics to generate targets for “Operation Street Sweeper”: “Raids targeted locations with recent incidents of violence, and the data subsequently showed that these raid locations were in areas of increased levels of violent crime,” the study reads.

In other words, raids appear to do little to actually reduce crime. In a companion paper published simultaneously, the same author group argues that “it may be just a ceremonial and symbolic action demonstrating that the police are actively engaged in dealing with crime, even if there is no actual crime reduction.”

The city has not responded to requests for data relative to their use of paramilitary raids.

Nationally, the use of PPU raids and zero tolerance tactics have come under greater scrutiny in the wake of the scathing Department of Justice report on Baltimore and that city’s adherence to a strategy of the same name and design.

Further, a June 2014 report by the American Civil Liberties Union concluded the following:

It’s not just the left-leaning ACLU: In 2006, Brown’s first year as mayor, the BPD’s strategy of favoring no-knock warrants and PPU raids was called out by the conservative Cato Institute as Buffalo’s “stampede against privacy.” Zero tolerance policing in Buffalo has often been the bailiwick of the city’s Strike Force division, and Strike Force has played an integral role in PPU raids, according to City Hall press releases.