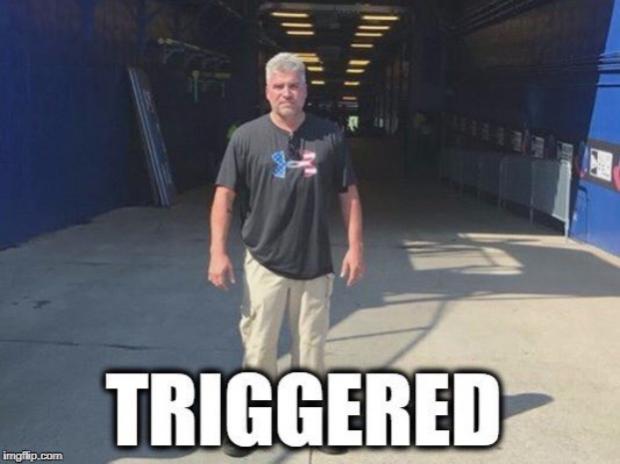 Last week, the President of the United States of America took time out of his busy schedule of golf and watching Fox to hector black football players about exercising their 1st Amendment right to political seech. This resulted in the NFL’s highest ratings in a while, and a massive production increase in self-righteous right-wing hand-wringing about millionaire black athletes who should really be more “grateful” than to protest police shootings of black people.

Personally, I will always stand for the national anthem, and the reasons why are none of your business. Well, that’s not completely true — like you, when it plays on TV before the start of a sports event, or during a medal ceremony, I stay firmly planted on the couch. But if an athlete takes a respectful knee during the anthem in order to make a political point, I respect that choice and hope the message being sent is being received. If you stand, but don’t recognize the right of others to sit or kneel, what is it, exactly, that you’re standing for? A flag? A flag is merely a symbol for our country and its Constitution. Compulsory show-patriotism is not what that flag stands for.

I’m not a Bills superfan, I’ve never been to a game, don’t plan to, either. Not my thing; not my scene. But I am a fan of the Constitution. Politics are my thing. Freedom and liberty and respectful protest are my scene. Players kneeling during the National Anthem affects me in no way whatsoever, whether I agree with it or not; it is silent, respectful protest. It disturbs nothing. It is kneeling, which is arguably more respectful than standing. I may be a lightweight or fair weather football fan, but that’s better than being a lightweight or fair weather American, and people aren’t kneeling to disrespect the flag or the country or your momma or apple pie or Chevrolet; they kneel to protest systemic racism, and almost all of the criticism and hate boils down to — you’re too uppity (now repurposed as “ungrateful”); stand the fuck up. The hand-wringing over this from people who just a few weeks ago expressed their support for statues of men who fought to buy, sell, and own other people is astounding. It sickens me not that players kneel, but the phony patriot-show virtue signaling from people who exalt symbolism over substance.

One man made headlines in Buffalo over the weekend because he quit his seasonal part-time job working security for the Bills to protest a few of the athletes taking a knee. Erich Nikischer made it to Channel 2, Huffington Post, the New York Post, the Daily News, and countless other media because of his principled resignation. Mr. Nikischer has another job, though. He is a state employee earning $71,000 as a court officer, to be precise. His wife, Tammy, earns the same, also working for the state.

You’ve no doubt see the carefully posed image of Mr. Nikischer outside the stadium just after he dramatically, “took off [his] shirt, threw [his] my Bills hat on the ground, walked out”. He continued that he could no longer, “work in a place where multi-millionaires cry that they are oppressed.”

There’s this thing called the “US Flag Code”.  It isn’t enforced because the 1st Amendment forbids it — this is a “free country”, so you’re free to pretty much do whatever you feel like with an American flag, and the government can’t do a thing about it. You can burn it, you can cut a hole it in and wear it as a poncho, you can even wear an Under Armour t-shirt that shows an American flag within the product logo. That’s what Mr. Nikischer is wearing in that now-iconic image, and that shirt violates the flag code’s prohibition on advertising, printing for temporary use, and “wearing apparel”. Why does Mr. Nikischer feel so strongly about black athletes kneeling before the flag during the anthem, but so flagrantly violates the code designed to ensure proper respect for our flag? Either way, I support Mr. Nikischer’s 1st Amendment right to disrespect the flag with his Under Armour shirt.

Mr. Nikischer has carefully santitized his Facebook timeline since he thrust himself into this controversy and made himself a public person for this issue, but yesterday he had posts up that he had shared from a page called “Fuck Sensitivity”. He gleefully posted that there’d be a civil war and one side had a lot of guns, while the other side wouldn’t know what bathroom to use, thus cleverly mixing bloodlust with transphobia. He had a large number of posts that could be summed up as, ‘fuck your feelings‘ - a favorite of Trump supporters. He had a post up that joked about murder, and this one was good, too: Someone sent me that screenshot — I didn’t take caps of the other posts, because I thought he’d be satisfied to keep them up. Incidentally, NASCAR has a big issue with its fans and confederate treason-slavery flags. Call me crazy, but waving the flag of a country that fought a war against the US for the right to maintain the right to keep, buy, and sell human beings as chattel is a lot more disrespectful to the US than kneeling during the National Anthem.

My favorite part of Mr. Nikischer’s timeline was the juxtaposition of anti-Constitutional Convention, ‘don’t let Cuomo take my state pension’ posts with ‘fuck your feelings, #MAGA!’ Hey, Mr. Nikischer and “Easy Home Ideas”, schools in the US still recite the Pledge of Allegiance.

Everything else has either been removed or stuck behind tightened privacy restrictions.

I wish Mr. Nikischer well and certainly defend his right to express his deeply held political speech. It’s too bad that he can’t see past his own point of view to do the same for others. America stands for the right of people to stand, kneel, sit, or stretch during the National Anthem. If black athletes peacefully and silently protesting police brutality offends you, well, to paraphrase,