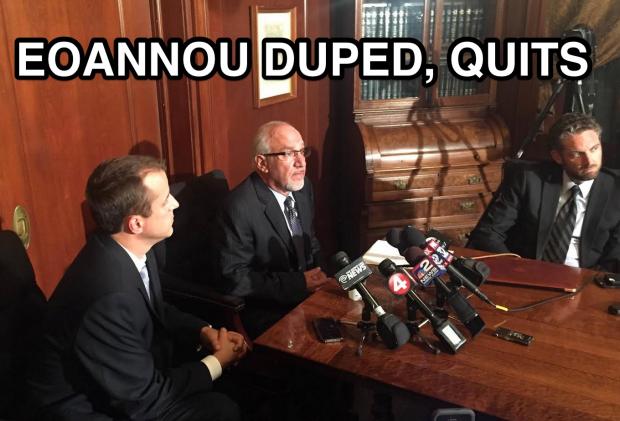 Thursday night, in a hastily called, unusually late-night press conference, attorney Thomas Eoannou publicly withdrew as attorney for the complaining victim in the Patrick Kane rape case. Eoannou’s move came just a day after he held a different press conference, where a brown paper bag with a hospital label on it took center stage, as Eoannou alleged that it was evidence of some sort of epic evidence tampering.

As it turns out, and as we reported on Thursday morning, the bag represented nothing at all. Eoannou was duped, overreacted, or both. To hear him tell it, his investigation into how that bag came into his possession led him to believe that the alleged victim’s mother’s story about it was false. Because he had so publicly used that bag to accuse someone unnamed of sabotaging this case and tampering with its evidence, Eoannou looked ridiculous coming before the media a second time doing his best Emily Litella impression: never mind.

Except here, Eoannou’s client’s mother’s misinformation was such that he felt he could no longer represent them, and he fired them. Eoannou made it crystal clear that he didn’t blame the alleged victim herself, and that she had nothing to do with this.

What do we know?

To circle back to the underlying rape investigation, these things are true:

1. Eoannou’s bag had nothing to do with the rape kit and is not evidence of tampering;

2. The alleged victim did not lie or make up some story to Eoannou about the bag — her mother evidently did;

3. None of this means that Patrick Kane did — or didn’t — rape the alleged victim;

4. The actual evidence remains safely tucked away at Central Police Services, unmolested and untainted, and from a prosecutorial standpoint, nothing is different as we wake up on Friday morning; and

5. Thomas Eoannou — who was, is, and remains one of the area’s elite criminal defense attorneys — had no official role in this case. For the underlying rape case, his withdrawal substantively represents absolutely nothing.

After all, the prosecution may not need the mother’s testimony to present and try this case, and without her, this whole episode with the bag never gets in front of a jury; it’s totally irrelevant. Arguably, were mom to testify, it could be brought up to assail her credibility, but that’s it. It can’t be used to challenge the credibility of the alleged victim herself.

It also bears mentioning that Paul Cambria is wrong — none of this establishes that the underlying rape allegation is a “fabrication”, and he’s blustering for his client. Cambria’s posturing is unseemly, and the leaks to the media about the results of the DNA tests likely came from someone in or close to Kane’s defense team and need to stop. Those leaks are poisoning the jury pool and thwarting justice. Unfortunately, we have Eoannou to blame, since his very public accusations regarding that evidence bag opened the door for Cambria to speak publicly, as well. All of this was horribly thought-out, and has exploded in the complainant’s team’s face.

If the complaining victim’s mother lied to Tom Eoannou; if a tangential witness lied to her own lawyer, who has no official role in the prosecution, how exactly does this reflect poorly on the complaining victim herself? It doesn’t. It’s just a sideshow. It’s a shitshow, to be sure, but full of sound and fury, signifying nothing. The prosecution — if it comes — will be brought by the District Attorney’s office. Eoannou’s only role was to help the accuser’s family navigate a complicated and nerve-wracking system for victims whose interests are not always directly protected by prosecutors.

At this point, the alleged victim’s mother may have bought herself a prosecution of her own.

Whether a prosecution comes is up to the District Attorney’s office. Will this behavior by one ancillary witness cause a notoriously cautious office to beg off? In a statement to the press last night, the accuser’s family says that she has, “every intention of pursuing this case to a just conclusion.”

One troubling aspect of all of this is this: although Eoannou may have felt an ethical obligation to withdraw from this representation based on the alleged victim’s mother’s behavior, he had no duty to do it so publicly. Ethical Rule 1.16 is instructive on this matter: if Eoannou felt a duty to so quickly and publicly withdraw, he suspected the mother was committing some sort of fraud.

It bears repeating that ejaculation is not an element of the crime of rape, and the absence of Kane’s DNA alone should not — and does not — absolve him of rape in this case. Likewise, the reported presence of another person’s DNA does not absolve Kane of rape. If I were to speculate, I suspect that the alleged victim’s mom likely concocted the “I found a ripped-up bag” thing because she’s legally unsophisticated and thought she could manufacture some sort of doubt about the DNA evidence. When Eoannou found out the truth, he had to quit (a) because she tried to commit a fraud; and (b) he helped promote it; and (c) he came out looking stupid when it turned out to be false.

However, a lawyer can only withdraw if he can do so “without material adverse effect on the interests of the client”. Query whether the way in which he announced his withdrawal met that requirement. I don’t think it did, and I think the myriad Tweets I’m seeing demanding that the alleged victim — who even Eoannou says is innocent of this aborted fraud — be prosecuted for extortion, underscores my conclusion.

One thing is certain, in my mind: the venue for this case must be changed. Send it to Jefferson or Broome County and get it away from the Buffalo media market in order to find New Yorkers who don’t care about Patrick Kane to analyze and find the facts in this case. I don’t think that Kane — or the prosection — can get a fair trial in Erie County, and the whole thing should be moved pursuant to 230.2 of the Criminal Procedure Law. Under NY law, both sides can request transfer of venue.

It is my hope that this matter goes before a grand jury sooner rather than later, and that somebody goes before a judge and asks for a gag order on all counsel and witnesses. All of this underscores what I’ve been saying since the day Mark Croce decided to tell the Buffalo News about what a classy joint he runs and how these girls were hanging all over Kaner — everyone should stop talking to the media.