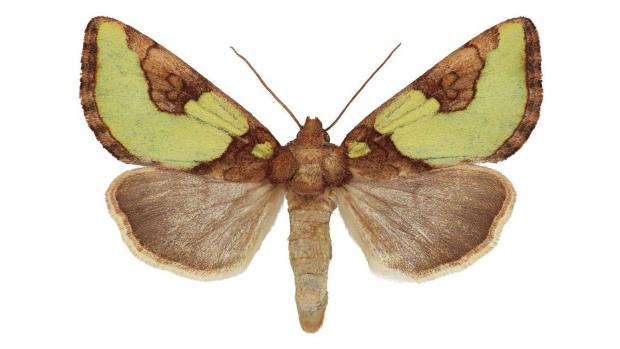 Prints showcasing the unexpected beauty of moths currently adorn the walls at Indigo Art. In this exhibition that merges science and art called Mothing: Life Beyond the Edge of Awareness, Joseph Scheer reveals the diverse patterns and colors of moths from the Sonoran desert of Northern Mexico in stunning detail.

The moth story starts when Scheer, a professor at Alfred University, began working with a high-end scanner at the initiation of Alfred’s Institute for Electronic Arts in 1997. Casting about for something to scan to see how the scanner worked, he snatched teeny gnat out of the air. The ensuing scan showed striking iridescent colors on the wings and complex compound eyes, all hidden from normal view. He was hooked and began collecting moths at night and scanning them during the day. He discovered that there are thousands upon thousands of species and that much less is known about moths than the more accessible members of the Lepidoptera family, butterflies. This is in part because moths are nocturnal and some are considered to be pests.

At first sight the show seems to present a slice of entomology. The moths are identified by their Latin names and individual moths are presented symmetrically with wings spread out as if on display in a natural history exhibit. But Scheer’s intention is firmly lodged in the creation of art. He refers to the “poetics” of moths: their nocturnal nature, their bad rap in popular culture, their life cycles, their host plants, the incredibly large number of species (estimated to be as many as thirteen times larger than that of butterflies).

The Chinese mulberry bark paper (called Cloud Dragon) on which they are printed confirms that they are works of art. The translucency and slight imperfections of the paper lend a subtle, ineffable softness to the images, not usually associated with digital printing. And they are done with a complex and expensive Iris printer that is becoming obsolete.

One series of prints shows two moths superimposed, the male above and the female below. The males often have larger antennas and the females typically have larger bodies because they contain eggs. Each moth in the pair from the Grammia species, for example, has a striking black and white wing pattern; the male’s antennas look like small feathers, the female’s body is bigger and her lower wings have the same rich vermillion color as her body.

The Indigo show also includes photographs of the caterpillars that eventually become moths. In the close-up photos, the caterpillars appear against black backgrounds. Their diverse patterns and spiky projections serve as defensive camouflage on their host plants, cacti, and trees.

Initially Scheer’s prints were scans of moths in New York’s Southern Tier. In 2010 he received a Fulbright grant to collect and study moths in the Sonoran desert, a region of immense biodiversity, where he was aided by a biology student at the University of Sonora in Hermosillo.

Scheer’s current scanning process is complicated, unlike his first attempts that parallel the use of a common office or home scanner. Because moths are three-dimensional rather than flat, multiple scans of separate layers in a depth of 2.5 millimeters are needed in order to accomplish crisp focus. In his recent artist talk at the gallery, Scheer said the scan of a single moth might take half a day.

Scheer’s work contributes to a better understanding of natural history and was the subject of a 2002 feature in National Geographic magazine. Fortunately, as an artist, he is not constrained by the need for underlying scientific reasons to justify his pursuit of the beauty in this fascinating niche of the natural world. Through October 4.