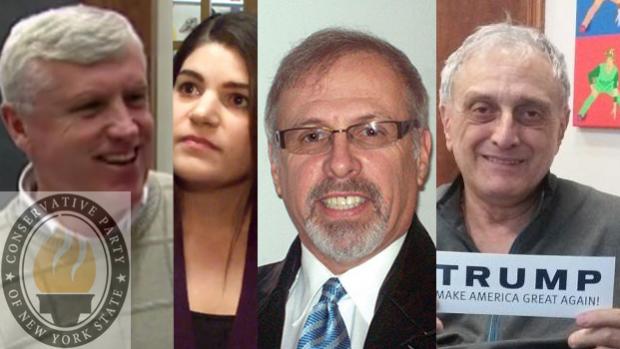 Lorigo’s column, which is little more than a poorly concealed piece of campaign literature for right wing county clerk candidate Mickey Kearns, is one big concern troll. That’s defined as, “a person who disingenuously expresses concern about an issue with the intention of undermining or derailing genuine discussion.” The Urban Dictionary’s entry is even more explicit:

In an argument (usually a political debate), a concern troll is someone who is on one side of the discussion, but pretends to be a supporter of the other side with “concerns”. The idea behind this is that your opponents will take your arguments more seriously if they think you’re an ally. Concern trolls who use fake identities are sometimes known as sockpuppets.

In his column, Lorigo purports to lament how the Erie County Democratic Committee, as led locally by Jeremy Zellner and Mark Poloncarz, has somehow “abandoned” the working class. Ralph Lorigo is no Democrat; he doesn’t speak for Democrats. He and his little reactionary club do not hold, espouse, or promote Democratic ideas or values. More to the point, his fusion party — a product of a pointless, fundamentally corrupt party system in New York — is no friend of the working class, Democrat or otherwise.

There are 287,000 registered Democrats in Erie County. Lorigo’s little club boasts 13,169 registered members. So, where does Lorigo get off lecturing the Democratic Party committee, its chairman, and its most prominent local elected official about Democratic values? The only reason he has any clout at all is thanks to a structural legal aberration.

The only reason a political club with 13,000 members has any pull at all is electoral fusion; it seldom puts up its own party members for election. Instead Lorigo’s group endorses a major party candidate — e.g., Mickey Kearns — who receives a “Wilson Pakula”, allowing him to run on the Conservative line, and those votes are added to the candidate’s total. In some cases, the vote is close enough that these cross-endorsements actually affect the outcome. The catch? LOL, when it comes to the so-called “Independence Party” and the Conservative fusion Party, that endorsement doesn’t come for free, or without strings. The connected get jobs.

I have been involved in Erie County Conservative politics for over 35 years, and have served as the chairman of the party for 23. I have never taken a salary, stipend or even a reimbursement from party funds for political activities. In addition, no government funds flow into my law office from any governmental source.

The power isn’t in receiving government funds, but in controlling jobs — the molten, glowing core of western New York politics. How many jobs does Lorigo’s club control? How many people in local, state, or county positions owe their livelihoods to Conservative fusion Party patronage? That is the proper metric, here, and it is conspicuously absent.

As chairman, I have worked with both Democrats and Republicans to endorse and elect people who care about Erie County taxpayers. My executive committee and I look at a candidate’s platform, record and the office sought. We never assume that someone’s party registration fully defines one; and we know that not every elected office legislates or creates policy.

What emetic pablum to suppose that someone running for office doesn’t “care about Erie County taxpayers”. Especially in any election since 2005’s red/green budget fiasco, which happened under Conservative fusion Party endorsee Joel Giambra’s watch.

We work to apply our principles of smaller, smarter government to the candidates seeking our support. We then choose who will best carry that torch for the residents of Erie County. For the Erie County Conservative Party, this is not about party labels, but about principles. As long as I am chairman, that approach will continue.

More often than not, the Conservative fusion Party would conspire with Democrat Steve “the Splitter” Pigeon to endorse Democrats who didn’t have the support of Democratic Headquarters. Even if that person lost a Democratic primary, he still might appear on the ballot in November on Lorigo’s line, causing further worries for the endorsed Democrat. Pigeon is now gone, and his stragglers are beclowning themselves in the 2nd Erie County Legislature district race — a story for another time.

My relationship with Democrats is not in trouble. In fact, the top of our ticket this year is Democrat Mickey Kearns for county clerk. In the past, we were proud to support Democrats such as Jimmy Griffin, Paul Tokasz, Dennis Gorski and countless others. They were conservative, pro-life, taxpayer-focused Democrats.

Jimmy Griffin died in 2008. Paul Tokasz hasn’t been an elected official since 2006. Until he became a town justice in Cheektowaga a couple of years ago, Dennis Gorksi had been out of public life since 1999. Mickey Kearns may be a lot of things, but he’s no Democrat. You don’t run in 2017 with the endorsements only of the Republicans and Conservative fusion Parties and get to call yourself that. Apparently, Republican party chair Nick Langworthy’s bench was too shallow to support a genuine Republican candidate for county clerk to succeed Senator Chris Jacobs. So? Recruit an opportunistic “Democrat” with the dearth of accomplishments or ideas. There are some glaring omissions from Lorigo’s recitation of “Democrats I heart”: G. Steven Pigeon. I wonder why? Joe Mascia? Chuck Swanick?

Today’s Democratic Party leadership of Chairman Jeremy Zellner and Mark Poloncarz would reject those officials outright. It is clear that conservative values of any kind are no longer welcome at Erie County Democratic Party headquarters.

Lorigo’s closest Democratic friend Steve is in big federal and state criminal trouble, and Poloncarz won re-election in 2015 after having explicitly refused to seek or accept the Conservative fusion Party line. Which “conservative values” is Lorigo talking about, exactly? Is it Swanick’s homophobia? Mascia’s colorful racial outbursts?

In spite of the ever-increasing sprint to the extremes, the Erie County Conservative Party will remain true to our platform, right here in the middle with the majority of Erie County voters; people who believe in common-sense ideas like: taxes are too high; criminals belong in jail; police should be respected; law-abiding gun owners are not the root of our crime problem; plastic bags should be legal; and 5-year-olds don’t need to be taught about sex reassignment surgery in kindergarten.

“Taxes are too high” and this patronage club is part of the problem. “Criminals belong in jail” reads like a Dick and Jane book. “Police should be respected”, except when they violate the laws and constitution. Gun ownership isn’t at risk. Plastic bags should be “legal” and cost a nickel, because they don’t degrade and there are better alternatives available. Can you imagine you use “plastic grocery bags” as a rallying cry for a political movement? How pathetic.

Hey, Ralph Lorigo: please identify which Erie County school — public or private — teaches “5-year-olds” about “sex reassignment surgery” in “kindergarten”. I’d like to know the school, the textbook, and the teacher. Because it’s just gutter, hateful lies meant to get a rise out of the homophobes; literally, that’s all that is. And why haven’t you added why and how you pick and choose which pro-choice candidates you endorse, or candidates who support same-sex marriage? The idea that the Conservative fusion Party operates based on “principles” is laughable. The only principle is maximizing the quids for an endorsement pro quo.

Sadly, if you agree with just one of those principles today, you don’t have a place in the Democratic Party of Zellner and Poloncarz.

They aren’t really “principles” as much as they are bumper sticker slogans. Lorigo’s club’s real principles might involve homophobia, criminalization of all abortion, and ensuring that everyone from children to the mentally ill have the unfettered right to possess a loaded gun; that is, unless, a candidate who opposes all or some of those makes a great offer or is an acolyte of Steve Pigeon’s.

I can’t help but think about the Democratic Party when I started 36 years ago. Back then, the majority of Democrats I encountered crossed party lines to support Ronald Reagan. Now, the party of the working class has been replaced by ivory tower elitists who hate anyone with a different opinion.

Ronald Reagan, whose policies helped to hasten the destruction of America’s middle class? For the record, Mark Poloncarz grew up in Lackawanna; his dad worked in a steel mill, and his mom was a nurse. Jeremy Zellner lives modestly in Tonawanda with his family; his dad worked in a car factory. Meanwhile, the Lorigo family practically runs West Seneca from its law office, hobnobs with Donald gold toilet 757 Trump and endorses Spaulding Lake’s own Chris Collins, and he’s sitting there talking about “ivory tower elitists”. This is utter madness, and the “different opinion” quip is nothing but projection.

LOL “assist them with jobs”. How true.

Being opposed to the Republican clone party that has close ties to Steve Pigeon and Carl Paladino isn’t a “hard left”. It’s common sense and decency.

The Conservative fusion Party purports to have principles, but it’s just an arm of the Republicans; a party so unpopular in New York State that it needs to control a bunch of extra fusion lines to win the occasional election. Its platform is made up of all the WBEN bogeymen – anti-choice, anti-LGBT, anti-gun control. It is the party that thinks “black lives matter” is a terrorist group and fully supports the Trump Administration.

So, is Lorigo’s relationship with Democrats in trouble? Quite simply, no such relationship should exist; it is right that he has to omit the indictees, the racists, and has to resort to Mickey Kearns and the deceased to underscore his purported bipartisanship. Democrats need to stop going to breakfasts with Lorigo, and they need to reject the Conservative Party fusion line. It is the antithesis of what is actually “conservative”. Meritocracy is anathema to it. Good government is beside the point — it’s about jobs.

The highest and best use of electoral fusion for Democrats right now would be to start a “Freedom Liberty Gun-Eagle” fusion party line to out-conservative Lorigo’s and further use the system to confuse voters.

Anyway, thanks, Ralph. Democrats are all set. You may speak for the reactionary hatred of some who can’t deal with gay people having rights, but we Democrats will fight for the working class by promoting univeral health coverage, protecting union membership, implementing a higher minimum wage, paid family and medical leave, and other policies and programs that actually help people, rather than facile talk radio slogans.