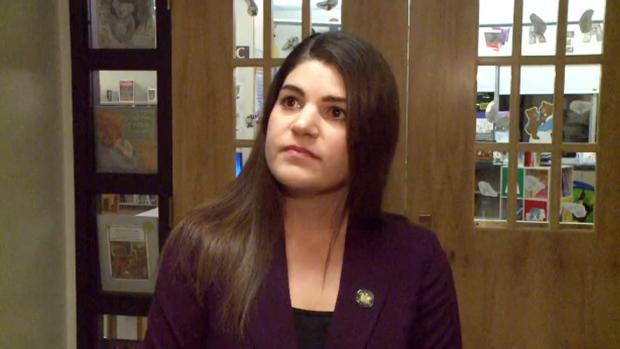 This week, State Assemblywoman Angela Wozniak took time out from her busy schedule as a do-nothing Republican Assembly backbencher and target of an ethics probe to attend a meeting of the Lancaster Board of Education. Among the topics on the agenda is one that is popping up not uncoincidentally throughout the state — the treatment of transgender and gender nonconforming students in the schools.

It bears mentioning that, since time immemorial, gay kids have gone to public schools and shared locker rooms with kids of the same gender, to whom they may have been attracted. Yet no one bats an eye. Transgender kids have a right to go to school and be free from bullying and discrimination, just like all kids. The measure of a government or society is how it treats its most vulnerable minorities. This is especially true when the issue of gender identity and sexual orientation comes to the fore during a child’s pubescence. Being naked in front of your peers isn’t going to be a comfortable thing for many kids, and certainly introducing transgender students into a locker room setting is going to raise issues that schools simply haven’t previously been equipped for.

By way of caveat, I am by no means an expert on any of this. All of this is new to me, and if my terminology is off, or my examples too simplistic, I apologize. I’m trying to convey an overall sense of, “read the thing before you accuse it of not doing something it does.”

The notion that has many parents and students concerned is that a person who is born a boy might end up using the girl’s locker room (or vice-versa). That’s true. However, in order to get to that point, a lot of things have to happen. The State Education Department has asked every school district in the state to bring up and discuss a policy to deal uniformly with these issues. It reads as follows: It’s all pretty straightforward. A transgender kid will be allowed to use the bathroom or locker room that conforms to his or her, “consistently expressed gender identity”.  The problem we have here is one of understanding. This isn’t just some kid who wakes up one morning and decides to be a cross-dresser. “Consistently expressed” means the child regularly holds him or herself out as the gender with which he or she identifies. All of this is done in close consultation with the school’s administration, the child, and the child’s parents.

Locker rooms: this one is more awkward, because it’s all awkward already. The policy, however, is clear — ANY student who wants more privacy will be accommodated. That means the transgender student or any of his cisgender peers. No student will be forced to be exposed to anything to which they don’t wish to be exposed. This could be done any one of a number of ways — a curtain in a specific area, staggering the times, etc. As for overnights, the policy gives the district flexibility and discretion to deal with this on a case-by-case basis.

All of this merely re-states current federal and state law. All of this is how a school district would be expected to handle such a situation. It makes sense to codify it as a school policy so there’s no issues or ambiguity.

The policy as drafted merely protects the rights of the transgender student while also protecting the rights of the cisgender student. Most of it has to do with respecting the child’s identity and referring to him using the pronouns he prefers. Frankly, if you read it and understand it, it’s completely non-controversial. Again — the bathroom issue doesn’t exist, and the locker room issue is easily dealt with to protect everyone and anyone who’s uncomfortable.

What this policy does is ensure that, e.g., a child who was born a boy but whose “consistently expressed gender identity” is female, she isn’t forced to use the boy’s locker room or bathroom. Wouldn’t that be more awkward for everyone, anyway? It also ensures that teachers can’t be wiseasses and continue to use the pronoun “he” for someone who attends school consistently as a girl.

The policy passed this week in Hamburg with nary a peep. In Clarence, it’s still up for debate. But in Lancaster, it seems as if you can’t say the sky is blue without inciting a riot. This brings us back to Assemblywoman Angela Wozniak, who appeared in order to get her face in the paper for something unrelated to the ongoing ethics probe, and to grandstand a little. When confronted with a few questions about state and federal law, she was caught wholly unprepared.

It’s amazing because she fundamentally misrepresents and doesn’t know the substance of the proposed policy. It does protect modesty. No, transgender kids in the locker rooms aren’t necessarily going to be attracted to the cisgender kids in the room with them. This is pandering at its ugliest and most idiotic. This is ignorance.

It’s “wrong” because it’s made up.

In the next breath, Channel 2’s Danny Spewak asks Wozniak about the policy and its relationship to the law. She is dumbstruck, and cannot answer a simple question about the thing she came down to speak out against because she didn’t do her homework and has no idea what she’s doing. Coming out in public and facing the cameras is hard work for the unprepared — it’s not like the Assembly, where a Republican can just show up and warm up a seat to collect $80k, plus per diems.

If your school district is evaluating whether to adopt a policy on transgender and gender non-conforming kids, it’s natural for parents (and students) to be wary. All of this may seem like some sort of fad, but before you get around to Caitlyn Jenner, tell that to Renee Richards, nee Richard Raskind, who faced discrimination in 1977.

Title IX specifically deals with transgender and gender non-conforming students. So does New York’s Dignity for All Students Act (DASA).

The reality is that this policy is going to affect only a very small number of people, and we need to protect not just the interests of the majority, but also vulnerable minorities who are subject to discrimination and harassment.

At the Clarence meeting last month, a woman got up to basically allege that transgender isn’t really a thing; that it’s all made up. That’s the mindset underlying Wozniak’s ignorant scaremongering. Transgender may be what people are talking about now, but it’s not new. It’s just that, in the past, kids who were born this way had to suffer in pain and silence; in fear and perpetual discomfort. We’re working to change that, and to make sure all kids are treated with dignity and respect.

I don’t think that’s so controversial, and I hope the video above marks the end of Ms. Wozniak’s political career.