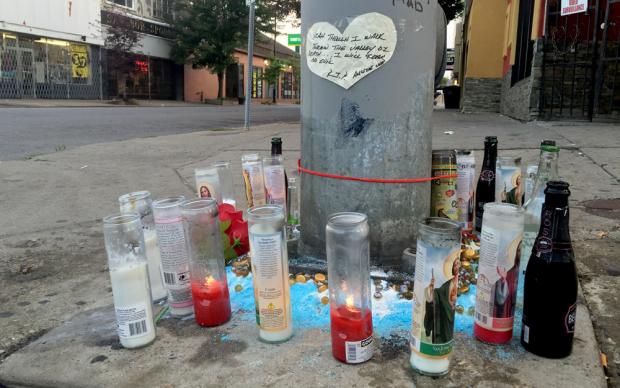 A memorial to Myron Kemp stands at intersection of Grant and Breckenridge streets, where Kemp was shot and killed last week.
by
Aaron Lowinger
/ Sep. 7, 2016 12am EST

Buffalo is seeing an unprecedented collapse of its police force’s ability to bring violent criminals to justice, even as it continues to pursue a controversial zero-tolerance policing strategy. Of the 34 homicides that have taken place in Buffalo this year, only five of them have been cleared by formal charges being brought against the accused.

At the same time, fault lines have appeared in the city’s relationship with the office of interim Erie County District Attorney Michael Flaherty. Those fault lines are dwarfed, however, by potential chasms in the relationship between the Buffalo Police Department and its citizens.

City officials have been trying to put a good face on its response to recent violence. At the outset of a July that saw 37 shootings, a spokesman for Buffalo Police insisted there wasn’t a crime wave.

“When you have a number of incidents in a short time span, it gives the impression that things are worse than they really might be based on numbers over the long haul of the year,” Buffalo Police Lieutenant Jeffrey Rinaldo said at a press conference, according to Aaron Besecker of the Buffalo News.

July was followed by an even bloodier August.

When the victims involved in the city’s illicit market for drugs and weapons, the deaths are labelled “gang-related.” When the victims are innocent bystanders, they are “senseless act of violence.” Sometimes the official narratives cross, as was the case when eight-year-old Donnell Bibbes was struck by “senseless” gunfire last month intended for his older brothers, described as “gang members” by the police.

Last Friday, the city’s prioritization of the “senseless” variety of victims was revealed at a press conference, where $2,500 of cash rewards were announced for information leading to arrests and convictions related to the five of the 2016 victims who were unintended targets of the gunfire that wounded or killed them.

Buffalo Police Commissioner Daniel Derenda and Mayor Byron Brown announced that police are close to solving several recent shootings, but needed more information to make arrests. As for the families of the victims of the remaining 25 uncleared homicides, Derenda told WBFO, “I want the victims from other families, the victims we’re not highlighting today, to know that we are working on their cases also. We will be announcing more rewards in the near future.”

The issue of the community not coming forward to assist in homicide investigations and the city’s deplorable clearance rate stretch back several years. In early 2015, both Investigative Post and The Public published articles on the subject. In brief: The city’s homicide clearance rate since 2013 is 35 percent, and many leaders in the African-American community lament that getting people to come forward with tips to help solve crimes has become difficult and rare.

Under Brown, the city’s police force has pursued a statistics-driven model of “broken windows” policing. It is possible that this policy has led to growing resentment of police in exactly the community that is being asked to come forward with information.

In mostly African-American neighborhoods that the Buffalo Police Department has determined to be high-crime areas, they have focused on low-level offenses such as trespass, code violations, and vehicle-related violations and crimes, using constitutionally questionable checkpoints as a crime-suppression tool. This involvement has invariably led to fees, fines, and court summonses for non-violent offenders, creating an economic obstacle for many.

Michael DeGeorge, spokesperson for the mayor and the Buffalo Police Department, told The Public that the net effect of zero-tolerance policing is the lowest number of “Part 1” violent crimes in the city’s history.

Last month, the Department of Justice levied a damning critique of Baltimore’s zero-tolerance police practices, noting a direct correlation between the policy and the erosion of community support for police:

“B[altimore]PD’s legacy of zero tolerance enforcement continues to drive its policing in certain Baltimore neighborhoods and leads to unconstitutional stops, searches, and arrests. Many BPD supervisors instruct officers to make frequent stops and arrests—even for minor offenses and with minimal or no suspicion—without sufficient consideration of whether this enforcement strategy promotes public safety and community trust or conforms to constitutional standards,”  reads one section.

“Indeed, current BPD Commissioner Davis and his predecessor, Anthony W. Batts, have both acknowledged publicly that the zero tolerance approach to policing eroded community trust and impeded efforts to build partnerships that are central to effective policing,” reads another.

“In the fall of 2014, [Mayor Stephanie Rawlings-Blake’s] administration noted that the zero tolerance strategy ‘ignited a rift between the citizens and the police, which still exists today’ and that there is a ‘broken relationship’ between law enforcement officials and community members,” reads yet another.

Baltimore started its zero-tolerance program in the late 1990s, in the wake of New York City Mayor Rudy Giuliani’s adoption of “broken windows” policing. Zero-tolerance policing was a major theme of Byron Brown’s first campaign for mayor, and he rang it in citywide when he assumed office in 2006.

A recent Open Buffalo survey—which was heavily criticized by the Buffalo News for not interviewing a proportionate number of whites and offering little analysis of the information it did provide—revealed that many blacks simply don’t trust the police. Only around 40 percent of blacks said they trusted the police to help them when they need it, and only 20 percent believed that police respect people of color.

Only 50 percent of the black males surveyed indicated they would call police if they knew something violent was going to happen. For black women, white men, and white women, those numbers were only 60, 65, and 75 percent respectively.

Furthermore, there appears to be a lingering animosity between Buffalo Police and the DA’s office, stemming from the administration of Flaherty’s predecessor, Frank A. Sedita III. During a recent debate of DA candidates hosted by the Buffalo Association of Black Journalists, former Deputy District Attorney Mark Sacha attacked Flaherty’s record of poor homicide clearances, noting that, according to his own research, Buffalo’s homicide clearance rate was among the worst in the country. Flaherty, who became DA after Sedita vacated the post to become a judge in January, deflected the attack onto the Buffalo Police, telling Sacha he should take that query up with Derenda.

“The DA’s office and law enforcement have no relationship,” Flynn claimed to The Public after the debate. Flynn accused the DA’s office of an “arrogant attitude” when it came down to which cases they would try.

“Just take the Moss case,” Flynn said, referencing the controversial 2013 hit-and-run death of Town of Evans man, Barry Moss. “The Evans police told them from day one we have enough evidence here. [Sedita and Flaherty] thought they knew it all, they thought they knew all the answers. They cherry-pick their cases, they don’t take on tough cases. They take cases based on their narrow self-interest, and that has to stop.”

Flaherty has not yet responded to efforts for comment.

Flaherty is viewed by his challengers as Sedita 2.0, causing him to repeatedly mention during the debate that he was not Frank Sedita, but his own man. A radical tactic, given the traditional power of incumbency in local races.