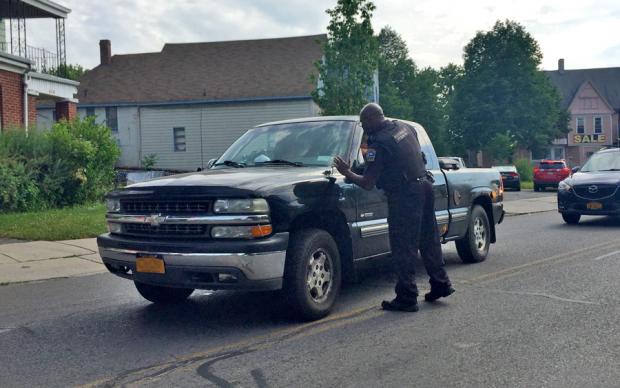 Editor’s note: the following is a collaboration between The Public and City & State, a downstate media outlet.

About two years ago, Thomas Lovelace was driving his blue 1984 BMW 325i down Bailey Avenue in Buffalo when he encountered a cluster of police vehicles with flashing lights and officers in the street near the E-district station house.

A computer programmer by trade, Lovelace found himself in the net of a Buffalo Police Department checkpoint, which have become commonplace throughout the city, but especially around public housing and on the East Side. At a checkpoint, police vehicles and personnel constrict traffic and use automatic license plate readers to scan for expired registrations, lapsed insurance, overdue state inspections or outstanding warrants. In theory, police then detain any motorist that the scanner flags.

Lovelace, who is African American, claims his status as a driver was in good order, but he was asked to pull over anyway. “I didn’t know my rights then, they said something about it being a suspicious vehicle that might be transporting drugs,” he said by phone. “They literally ripped my car apart looking for drugs. They broke my laptop. [The computer] just happened to be in my trunk and they just threw it on the ground.”

Realizing that what he endured could have been much worse and fearing that the police were focusing on revenue generation rather than public safety, Lovelace, who was never compensated for the computer, created a Facebook group he set up to raise awareness and track the kind of checkpoints that ensnared him in 2014.

Lovelace is just one of many thousands who have gone through a BPD checkpoint, and one of many hundreds who has been detained or arrested as a result. But as Buffalo has made the tactic common practice in certain parts of the city, critics argue that checkpoints like the one Lovelace encountered violate fundamental constitutional rights and information made available suggests that these checkpoints disproportionately target African-American neighborhoods.

Since at least 2013, the BPD has periodically conducted such traffic checkpoints, concentrating heavily on the East Side and several Buffalo Municipal Housing Authority sites. Court documents, data, and BPD records—collected over the past year by a research project led by SUNY Buffalo law professor Anjana Malhotra and assisted by students and professors at the SUNY Buffalo and Cornell University law schools—indicate a pattern of checkpoints allegedly in violation of Fourth Amendment rights.

“Buffalo residents have routinely been racially profiled, detained, and arrested without probable cause, stopped without individualized suspicion, and been subject to patently unconstitutional sweeps, raids and checkpoints,” Malhotra writes in forthcoming study summarizing her research.

Mike DeGeorge, a spokesman for Mayor Brown and the BPD, said the mayor’s office and police department would not comment on the allegations that checkpoints violate Fourth Amendment rights until they had a chance to fully review the study, which has not yet been published.

For Malhotra, the federal and state court decisions around checkpoints clearly indicate that BPD has engaged in illegal policing.

In 2000, the U.S. Supreme Court in Indianapolis v. Edmond found that vehicle checkpoints “absent individualized suspicion” were a violation of the Fourth Amendment protection from illegal search and seizure. Further, in the 2006 People v. Trotter decision involving the Rochester Police Department, the state Appellate Court ruled that police checkpoints for “general crime control” were unconstitutional.

The checkpoints have had an unclear effect on crime deterrence—the city’s violent crime rate has stayed relatively flat—but when the circumstances of checkpoint arrests come to light in court, some have been dismissed.

Just last year on Sept. 11, 2015, a man driving through a BPD Housing Unit checkpoint near Riverside’s Schaffer Village housing projects was arrested for driving while intoxicated, according to the court decision. The arresting officer “observed an open container of beer in plain view in defendant’s lap.” The same officer, William Robinson, testified under cross-examination that checkpoints have become routine for the department, noting that “when we’re told to do a checkpoint, it’s do a checkpoint here at this time because we’ve done, I don’t know, a hundred of them… We stop every single car for safety and equipment violations, make sure we have our overhead lights on, and it’s got to be a safe spot.”

Buffalo City Court Judge Kevin J. Keane agreed with the defense to suppress all evidence gained by the stop including the blood-alcohol test, as BPD “failed to establish that the checkpoint was established and operated in a manner that complied with constitutional requirements,” and that the police “had no right to stop and to arrest the defendant.”

Another study published in May 2016 provides additional context in the Buffalo Police’s use of the tactic. Undertaken by SUNY Buffalo State criminal justice professor Scott Phillips and University of Texas at Dallas professor Andrew Palmer Wheeler, the study of what was called “Operation Strikeforce” found that “while officers made arrests for individuals they stopped who had outstanding warrants, confiscated several firearms and vehicles, and they also wrote over 6,000 traffic tickets, the primary goal was to deter crime and disorder.”

During Operation Strikeforce, the BPD, with assistance from State Police and the Erie County Sheriff, conducted more than 60 checkpoints across 46 locations. Each checkpoint remained in place for 90 minutes and all but eight of them occurred on Buffalo’s predominantly African-American East Side.

Buffalo Mayor Byron Brown and Police Commissioner Daniel Derenda have made checkpoints a key strategy in their efforts to crack down on crime. The efforts have been led by the department’s Strike Force unit, a special outfit formed by Brown and then-Commissioner H. McCarthy Gipson in 2006 to combat gang-related crime, but also to “target and eliminate high crime areas in the city” and to “strictly enforce” Brown’s zero tolerance law enforcement plan, according to information on the city’s website.

In early 2014, Derenda told the Buffalo News, “Our Strike Force officers are conducting daily roadblocks at multiple locations and surprising the criminal element. Because of that people are now less likely to carry guns knowing that they may be stopped at a safety checkpoint.” The article mentions that such law enforcement initiatives were put into place by the “urging of Mayor Byron Brown.”

The responsibility for the bulk of Buffalo’s checkpoints have been carried by the BPD’s Strike Force and the BPD Housing Unit, according to Malhotra’s research. The Housing Unit is a group of 21 officers assigned to police the population residing in Buffalo Municipal Housing Authority projects. The Housing Unit shares office space with Strike Force on Perry Street, and they often collaborate on checkpoints.

According to a Housing Unit monthly log obtained by Malhotra and shared with The Public and City & State, the police force conducted more than 20 checkpoints in and around BMHA sites between May 2013 and April 2014, many of which were assisted by Strike Force.

While the checkpoints’ main purpose was to reduce violent crime, officers have found themselves writing tickets while more serious criminal activity took place nearby. According to the Housing Unit log, on April 13, 2014, the Strike Force assisted at a checkpoint on Oakmont Avenue in the Kenfield-Langfield area, which led to “various impounds and summons [sic].” On the same date, “two individuals (were) shot on Hempstead,” just one street over from the checkpoint location.

Malhotra suspects that many of Buffalo’s checkpoints have been executed unlawfully. The 6,000 tickets issued at 60 checkpoints detailed in the Operation Strikeforce study lays that bare, in her estimation. The plate-reading “technology does not detect routine traffic offenses, but rather is limited to detecting cars with suspended licences and outstanding warrants,” Malhotra wrote in an email.

“And as of 2014, there were 6,247 outstanding warrants [countywide], and it is highly doubtful that the roadblocks captured all individuals in the county with outstanding warrants, especially given their selective locations in communities of color,” Malhotra continued. “Rather, [the study’s] arrests and numbers are more consistent with Judge Keane’s decision last month finding that the BPD officers conducted checkpoints with discretionary and nonuniform procedures, in violation of the Fourth Amendment.”

The scrutiny comes at a time when the tension between police and the communities they serve are running high across the nation. After the death of two black men at the hands of police officers last week, a trend that has come under heavy scrutiny in recent years, and the ambush and murder of five Dallas police officers, cities across the nation have seen protests, forums and vigils, all aimed at addressing the underlying issues that create that tension.

Beginning with a rally at Martin Luther King, Jr. Park Friday, similar events have been happening around Buffalo and several more are planned throughout the week.

While some are thankful for the checkpoints and see some value in them, others feel uneasy around them. Last week Philando Castile was shot and killed by a police officer outside St. Paul, Minnesota, after being pulled over for a broken taillight. Multiple media outlets have reported that Castile, who had a legal gun in the car, was stopped by police 52 times in 14 years.

Complaints have been raised closer to home, as well. Last year, East Side resident Madelyn Smith wrote a letter to the Challenger, a community paper based on the East Side of Buffalo, that she and her law-abiding neighbors are made to feel like criminals because they live in the most heavily policed neighborhood in the city.

Mentioning Strike Force by name, she wrote that the “roadblocks I keep seeing by the Buffalo police are not helping the fight against crime. All I see is the police wasting time when they could be looking for those that commit crime. Thankfully, after being faced with police during the inspection, I haven’t received a ticket YET. I’ve been through the roadblock thing almost a dozen times.”

RELATED: The stop and frisk problem on BMHA properties.