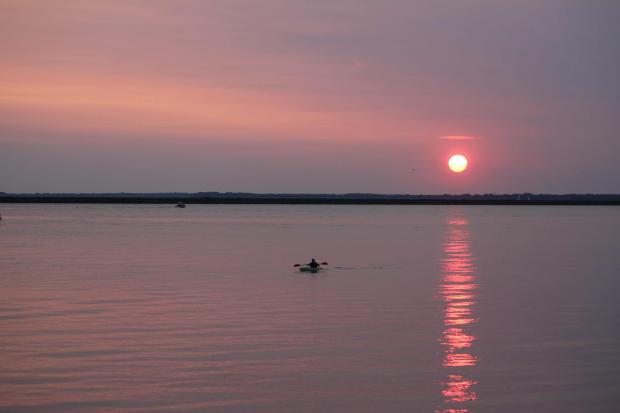 Is the sun setting or rising regards public access on Buffalo's Outer Harbor. This week we may know!
by
Jay Burney
/ Aug. 3, 2015 10am EST

In a landmark decision that could influence Buffalo’s Outer Harbor Development, an Ohio court ruled against private landowners who made claim to ownership of Lake Michigan beachfront properties, and not the public. The ruling reinforces the Public Trust Doctrine, which we have written about here.

The ruling protects the publics right to the shoreline. The State of Indiana has long endorsed the Public Trust Doctrine when it comes to waterbodies and has long held that the state of Indiana holds title to the shore of Lake Michigan below the ordinary high-water mark in trust for the public to enjoy for recreation and other uses. It rreinforces the right of the public to the use of publically owned spaces.

An announcement released by the Alliance for the Great Lakes (AGL), which has an active WNY presence, and Save the Dunes, states “The Alliance for the Great Lakes and Save the Dunes joined the lawsuits as intervening parties to protect their members’ right to walk, sit, fish, bird-watch and play along the Indiana beach — activities long held as part of the public trust.”

The Indiana Superior Court ruled in favor of the Alliance and Save the Dunes, agreeing that the state of Indiana holds that property in trust for the public’s protected uses.  The Judge, Richard Stalbrink, held that private landowners cannot impair the public’s right to use the public property and that to hold otherwise would “deny the public from enjoying Indiana’s limited access to one of the greatest natural resources in this state.”

The AGL announcement stated,  “Our win in this case is enormously important for two reasons. First, the Public Trust doctrine and the state’s title to the lakeshore are important to conservation efforts on the shoreline of Lake Michigan. Regulation of potentially damaging construction and other activities, and the integrity and continuity of the shoreline ecosystem, are greatly facilitated by public ownership. Second, as Judge Stalbrink recognized in his opinion, the lakeshore below the ordinary high-water mark is a critically important public resource. If the beachfront residents had prevailed in their lawsuits, the public’s historic right to freely use the Indiana lakeshore would be gutted and our invaluable connection to the shore of Lake Michigan would be forever changed.

The Alliance for the Great Lakes and Save the Dunes were represented in the case by the Conservation Law Center, located in Bloomington, Ind. The AGL said in thier statment “This landmark win would not have been possible without the persuasive arguments of the center’s legal team. We also thank our fellow interveners, the Long Beach Community Alliance, as well as the Indiana Attorney General for their cooperation and collaboration in defending the public trust on Indiana’s Lake Michigan shoreline.”

Our Outer Harbor-We Own it

Much of Buffalo’s Outer Harbor land is currently owned by the Erie Canal Harbor Development Corporation (ECHDC), -a state subsidiary agency of Empire State Development. ECHDC was designed to be an implementation agency for waterfront planning. These are public entities, created to benefit the residents of the State of New York.  The land that they own is held in public trust. We own it.

Plans by the ECHDC to privatize much of this land has raised both the ire of local activists that want the land to remain in public trust and has led to speculation as to whether the State of New York has the legal right to transfer public land to private ownership. Last fall the ECHDC announced plans to create private condominium communities on critical portions of the  Buffalo Outer Harbor -which created significant controversy.

The plan, developed by San Francisco based Perkins and Will, identified several places on the Outer Harbor, including Wilkeson Pointe Park, that would become privately owned condominium projects. Representatives of Perkins and Will said at public presentations last fall that the public would be able to “drive on the new streets” created by the plan and that “this would preserve public access”.  The controversy was generated by a wide public outcry including a large rally at Times Beach Nature Preserve because the preserve is threatened by development. many public stakeholders were left out of the planning process and felt that their voices were not heard, drowned out perhaps by the development interests represented at ECHDC. Clearly there is a huge demand for public access to Buffalo’s waterfront, long sequestered from many in the community. In addition there is significant concern within the environmental community that inappropriate development will harm ecosystem health that should be more reflective of protecting clean water resources and habitat concerns.  This initial push back lead to “reconsiderations” by ECHDC about how, what, and when to develop on the outer harbor. Despite tepid plan reactions and and private discussions with some in the environmental community whom have criticized the lack of public input, these reconsiderations have never been made public despite announcements as early as last January that a new plan would soon be made public.

Observers of this “process” note that the most obvious of these reconsiderations include a “slow down” in plans to put “shovels in the ground” for developers at Wilkeson Pointe, which ECHDC Chair Robert Gioia announced that they were “ready to do” last fall and again over the winter. Whether or not Wilkeson Pointe will ever be developed into a condominium community is unclear. However it is noted that both ECHDC Chair Mr. Gioia and ESD’s Sam Hoyt have personally told this column that condo’s will “not happen” at Wilkeson Pointe.  However, Tom Dee, President of ECHDC famously told the Investigative Posts Dan Telvock in an interview last October that “I don’t know that I am prepared to say that everything that’s green will stay green forever. I don’t think that’s good planning.”  Mr. Dee  has never retracted that position.

Despite private announcements that ECHDC is looking for “Lighter Quicker and Cheaper” alternatives, at least for the immediate future, none have been publically announced. It is widely anticipated that the ECHDC will soon announce development projects that remain based on the Perkins and Will plan unveiled last summer. Perhaps as early as this week. It remains clear that much of the planning has gone on behind closed doors and the public has been locked out of decision-making. We are not sure why the ECHDC is continuing to antagonize the public and others including an informed and professional enviornemntal, political, and legal community that supports appropriate development on the Outer Harbor including environmental protections and public access that will benifit all of the citizens of our community for generations to come.

Speculation is that the anticipated roll out will include a first phase of development that will focus on the western end of the Outer Harbor, near the former Freezer Queen facility. That facility owned by real estate developer Gary Buchheit, which was recently in the news for a new development project focusing on high end private homes and mixed use commercial development.

Activists and others that have been concerned about the lack of transparency by ECHDC in outer harbor development planning remain uneasy about the coming announcement. Many believe that if push comes to shove, engagement in the Public Trust context will help to characterize whether or not the many public parcels on the Outer Harbor are transferred to private interests or remain a critical asset of the public for generations to come. It is clear that representatives of the ECHDC consider corporate interests more important than the general public including those that will come after us that will have a quality of life that is determined by the quantity and quality of publically accessible land and water on the outer harbor.

The Erie County Legislature and those activists that worked hard to champion this issue deserve a solid round of applause for the passing of a local law, last week to prevent the dumping of “microbeads” into the sewer systems and ultimately, because they cannot be filtered, into the drinking water that the sewer systems dump into.

A more detailed story by Justin Sondell on this legislation appeared in the public last Friday.

This is truly landmark legislation that is setting a precedent for local and regional governments everywhere to pay attention to. Sadly, New York State has failed to pass similar legislation in the past two sessions. Erie County Executive Mark Poloncarz has not committed to signing this legislation into law, instead promising to hold a public hearing on the issue, which has not yet been scheduled.

Burke said that Lake Erie “is our greatest asset, and is a water resource for regions beyond Erie County,  It is vital to our economy, and health.”

The Buffalo News published a story about this legislation that Burke has written about, calling the News story misleading and demanding that the News hold itself to a higher standard of journalism. We agree.

Jill Jedlicka Executive Director of Buffalo Niagara Riverkeeper said that public education is the key and that our region has stepped up to lead.

This is an important step and this column is proud to recognize the County Legislature for once again demonstrating critical environmental leadership. You may remember that in December of 2013 the County Legislature banned high-volume hydraulic fracturing in Erie County. This was aat the time a courgageous stand that was supported by a state-wide ban initiated by Governor Cuomo is December of 2014.

Even with all of this progress, we at GreenWatch have to continue to ask, are we doing enough?

Even with this important local law which is now in front of the Erie County Executive, we have to say, “No, we are not doing enough” but, we are grateful for the local bipartisian efforts! Enviornmental leadership by so many of our local elected officials is a truly important step and we gratefully acknowledge the leadership. In a truly sustainable world, the bottom line will always be the environment.

Jay Burney is environment and ecology editor for The Public and a founder of GreenWatch.