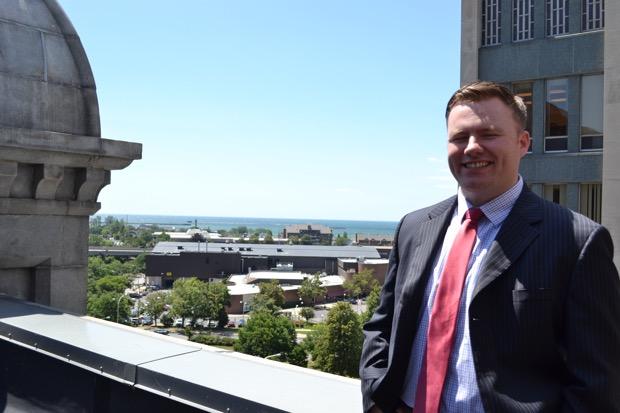 Erie County has become the first municipality in the state to pass legislation banning plastic microbeads in cosmetic products while bills at the state and federal levels continue to linger.

The legislation, which passed the Erie County Legislature in a unanimous vote, will prohibit retailers from selling products that contain the tiny plastic beads, which are not screened out by most water treatment plants and account for an estimated 90 percent of new plastic pollution in the Lake Erie.

Legislator Patrick Burke, a Buffalo Democrat, was the sponsor of the bill and pushed to get the law enacted with the help of the legislature’s chair, Republican John Mills.

Burke said that while the ban can’t stop people from ordering products with microbeads online or retailers in other Great Lakes counties or states from continuing to sell them, the ban will lessen the amount of the damaging plastics entering the waterways and could act as a catalyst for other counties, or even the state or federal governments, to act.

The county law will require all retailers to stop selling the products within six months and fines will be issued to those found to be stocking the products after the grace period.

The freshman lawmaker has called the Erie County ban the most comprehensive in the nation, noting that some laws, like the ban in Illinois, allow for biodegradable plastic microbeads, though research on whether those products are truly safe is inconclusive.

“On all those levels it sets a standard and it puts the county of Erie in a position of leadership,” Burke said.

On the state level, Attorney General Eric Schneiderman has been pushing this issue for two years. The bill has faltered in the state senate after passing in the Assembly for two consecutive sessions now.

This past session Republican state Sen. Tom O’Mara of Big Flats introduced two separate microbead bills but neither managed to make it out of committee.

Nick Benson, a Schneiderman spokesman, said in an email that the attorney general plans to push the legislation again next year.

“An estimated 19 tons of plastic microbeads enter New York’s waterways each and every year,” Benson said. “These microbeads are a threat to our environment, our wildlife, and to public health.”

Saima Anjam, environmental health director at Environmental Advocates of New York, said she hopes that Erie County’s leadership on the matter will help pressure senate Republicans into coming around on a ban of the beads, which she described “pointless.”

“Despite industry marketing they don’t make anyone cleaner or more beautiful, but they do wreak havoc on our sewer systems, waterways and wildlife,” Anjam said.

Two members of the legislature’s majority caucus, Republican Lynne Dixon and Conservative Joe Lorigo voiced concerns about the ability of the county to enforce the ban before voting in favor of the measure.

Dixon said she hopes that other levels of government will move on bans so that the lakes will not continue to be susceptible to the pollutants entering the water from other counties.

“I do think long term it’s important that the state do what is necessary, and I know it’s been a while, to put something in place so that we’re not worried about county borders in terms of enforcement, “ she said.

On the federal level, US Senator Kirsten Gillibrand also reintroduced a bill banning the plastics pellets for the second year in a row, but it has not been voted on in Congress.

Justin Sondel appears courtesy of a content-sharing agreement between The Public and City & State.