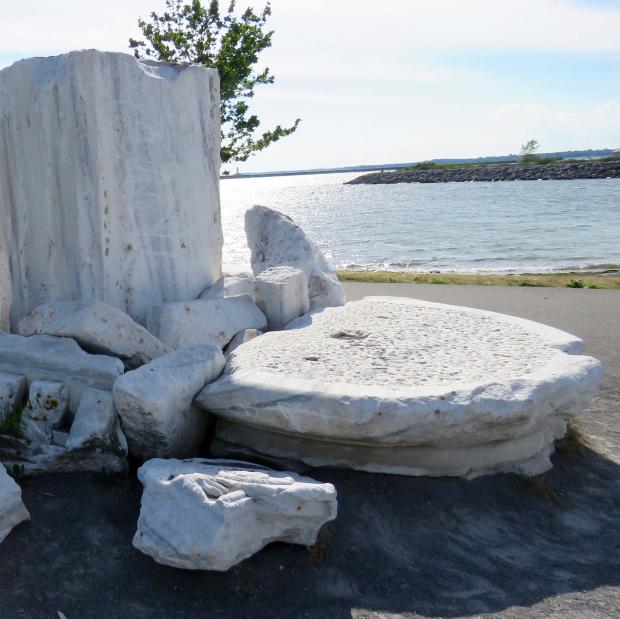 Artifacts of Civilization on Buffalo's Outer Harbor
by
Jay Burney
/ Jul. 17, 2016 10am EST

We are living in an age of ecological armageddon. You might not realize it but the biological earth, as we experience it, and our lives which depend upon this state of nature are on the verge of complete collapse. You should know this.

I say this because it seems that Americans, and by this I mean people that live in the United States, and most especially those of us that live in Buffalo and Western New York are very disconnected from these realities.  We live in a bubble. Our day to day lives are rarely impacted as they have been in other parts of the county and world. Yet.

Despite the internet, We are completely surrounded by a dearth of information. The media messaging is mostly controlled by thought memes that support things like endless consumerism fraudulent growth pretenses, and American exceptionalism.  We live in a town where our main sources of news, such as the Buffalo News which has abandoned the very influential science section, have become a talking points resellers and repeaters of the talking points of psuedo economic development strategies that portent to promote economic growth.   Besides a lack of real opportunities for most people, including fundamental opportunities to participate in economy, our development schemes are fraudulent, provide value to only a few, and continue to neglect the environment. There are a few flash points uplifting local strategies, but these cover story initiatives are not deep, and are dependent upon and will be consumed by the larger beast of economic oppression. We are on a set and deliberate course for economic, social, and environmental destruction.   All of us.

Not so long ago, my parents generation and those that came before them, lived in a world where the outdoors was a central force. The outdoor world, nature, provided food, recreation, and an emotional connection that at the very least required constant attention and negotiation. Often this came in the context of paying attention to weather. In a real sense, weather creates unconditional realities that lives depended upon. Food, safety, and survival where very much a part of understanding and negotiating relationships with nature. The natural world was mostly our ally, our heritage. Generations of humans learned ways to work with nature, negotiate nature, and find ways to survive with the understanding that we are nature, we are the environment, and it is all so much bigger than us as individuals and as a species.

Not so much anymore, or at least we have allowed ourselves to believe.

At some point in human history, relatively recently in our species hundred thousand year journey,  it became codified that the human role on the planet is to “conquer” nature in order to survive. This codification may have been initiated in religious rituals and the technological advancements that allowed for for mass consumption of religious dogma. For instance, there are passages in the Christian Bible that refer to the call to conquer nature.  Very recently, the Buffalo Common Council, under the leadership of Council President, the Reverend Darious Priden, initiated a Common Council meeting (where the august body would determine whether or not an unusual building project on Buffalo’s Outer Harbor should or should not be built), with an invocation quoting Moses. Here he was quoted as  speaking to the Israelites and allowing that God has said that “we must go forth and conquer the land”.  The subsequent vote by the Common Council, our elected and so-called leaders supported a publicly expensive and precedent setting project that will change the Outer Harbor for generations, and sets the stage for future development decisions across the city under the City’s proposed Greencode. The primary precedent established is a lack of scrutiny under the New York State Environmental Quality Review Act (SEQRA). Simply put, the developer has stated that there will be no environmental or social impacts by this project, and the City Planning Board and the Common Council approved the project without following guidelines that promote scrutiny.

We wrote about this here:

A group of citizens including myself, and the Buffalo Niagara Riverkeeper organization, have initiated lawsuits challenging the Planning Board and the Common Council decisions to proceed with out scrutiny or any real evaluation of the developers claims. We have written about that here:  Challenging the New Business as Usual.

Our objective is not so focused on preventing any or all development as has been alleged by the chronic bloviators of opinion that wish to call objective scrutiny obstructionist, but rather to promote thoughtful decision making on projects that will have significant impact on future generations. This includes significant probable environmental and economic impacts that are negative for the people that live and pay taxes here. The SEQRA law provides citizens and decision makers the opportunity to evaluate projects. The current strategy by the Planning Board, its City of Buffalo Office of Strategic Planning leadership,  and the Common Council, reflects a developers dream of using public money to reap profits with little or no scrutiny. This is bad governance, and portends a gravely flawed system that will introduce more harm that benefit to the citizens of our city, region, and planet.

Not to malinger around or pontificate about our challenged modern cultures ideals, but it is critical to note that the the Industrial Revolution ushered in new ways and new themes focused on raising the human condition while at the same time finding exponential pathways to the conquest of nature. While many will argue that the human condition has been vastly improved by economic development, it is not necessarily so. In fact, it has resulted in a cataustrophic failure. The scientific facts are that the planets ability to sustain life, including human life, is greatly diminished and is exponentially failing. Scientists present analysis that life on earth is collapsing, and that we are in the midst of an extinction episode unrivaled in the history of the planet. You can read more about the Sixth Extinction here

and or you can goggle it.

Human impacts related to the development that really got motivated by the Industrial Revolution included worldwide deforestation, worldwide engineering of natural wetlands and ecosystems which have destroyed the natural ecological services that they provide (clean air and water), poisoning of our oceans and atmosphere turning rivers creeks, lakes, and oceans into toilets and legal pollution channels, industrial agriculture that features the poisoning of the entire natural world, energy extraction, and the war and strife that comes from the competition to promote the political contexts of development, or destruction, of the planet. Climate change is here, and across the world massive populations are suffering and facing genocide at the hands of, well, us. There is nothing good happening. And if you think we have a future under our present circumstances and direction, you are living in a bubble.

We have not listened

While I am not a Catholic, I am glad to be a cheerleader for Pope Francis’s 2016 Encyclical “Our Common Home”

This magnificent Encyclical, published in June of 2015, speaks to the unnatural anthropomorphism of the development of human culture. The Pope expresses that we have become deliberately separated from the natural world by our economic political models that treat the environment and culture as “external” to the singular goal of profit.  as if we think we exist as an island distinct from the biology and natural theology of the living planet. The Pope says “Nothing in the world is indifferent to us.”  This Encyclical says that the impact on the biological living systems that create this unique place in the universe are devastating and fly in the face of what he characterizes as God’s word.

We wrote more about the Popes Encyclical here:

Local Leadership Failure and a need to Reboot

This is a particular challenge to Reverend Pridgen’s version of faith, and most particularly to his leadership of the Common Council.  His apparent subjugation to an interpretation from the old Testament that he thinks gives humans the right to go forth and conquer nature is nothing more than bad theology, horrible and myopic governance, and a profound testament to a lack of leadership, understanding, vision, and a capacity to move us forward. This leadership is not worthy of our trust.

It is critical to know that while humans are totally dependent on nature, the nature of the universe and the planet is not dependent on humans. It is effected by each and every one of us individually and collectively. As we grow and conquer every natural system, nature will respond. Nature is resilient, and probably meets the definition of eternal.  Humans are probably just temporary field disturbances.

How do we help each other to understand that the unnatural strategy to conquer nature and the natural world is the conquest and destruction of ourselves? Can we reboot?

The economy is not separate from nature, and humans are not separate from nature. Nature and the human condition is biocentric.  Nature is the underlaying force that supports humanity, supports a thriving economy, supports social equity, supports our food and health. Nature has created and will sustain this beautiful and unique place in the universe that we call earth?  If we continue to rely on an economy based on destroying nature, it will destroy the human species. Us. And it nearly has.

Nature will not go away, and ultimately nature will bat last.

Here is another (supportive) point of view: Infinite Growth is a Dangerous Illusion /The Guardian Jason Hickel 15 July, 2016

Our Current Economic System is a Form of Brain Damage