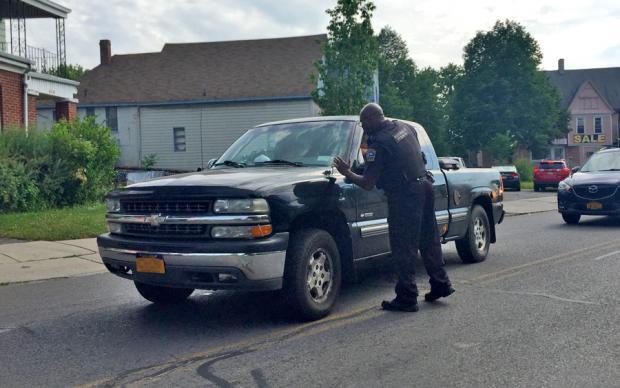 The Buffalo Police Department is facing a class action lawsuit over its use of traffic checkpoints.

The complaint — filed in federal court on behalf of of the advocacy group Black Lives Resist in Rust, individual citizens and unnamed residents who may have been affected — seeks damages for pain and suffering related to the checkpoints administered over the last three years.

“The City of Buffalo has, for over five years, engaged in a systematic practice of targeting Black and Latino neighborhoods and residents for aggressive and punitive traffic enforcement. The City employs this unlawful practice in part to generate municipal revenue. The City has thus effectively sought to balance its budget on the backs of its Black and Latino citizens,” according to the lawsuit.

Mike DeGeorge, a spokesman for both the police department and the mayor, did not immediately return a call seeking comment.

The plaintiffs, who are being assisted by the Western New York Law Center, the New York Center for Law and Economic Justice and the Center for Constitutional Rights, claim that those fines and fees were collected by the city unlawfully, as the checkpoints violate residents’ Fourth and Fourteenth Amendment rights to protection from illegal search and seizure and equal protection under the law.The suit claims that the police department targeted African American and Latino communities, citing public data obtained from BPD through a Freedom of Information Law request that showed that 88 percent of checkpoints were deployed in predominantly African American neighborhoods and that 40 percent of those conducted since 2012 occurred in three census tracts, each with Black or Latino populations exceeding 86 percent.

Darius Charney, a senior staff attorney at the Center for Constitutional Rights, said that his organization knew shortly after hearing the details of the police department’s checkpoint program that it was a case worth taking up.

“It’s one of the more egregious examples of discriminatory policing that we’ve seen in the country in recent years,” Charney said.

The Buffalo Police Department’s use of checkpoints came under scrutiny after a  study published by former University at Buffalo law professor Anjana Malhotra in collaboration with Cornell University showing a disproportionate burden of the checkpoint program on African American and Latino neighborhoods and calling into question the constitutionality of the practice became public. The New York State Attorney General’s office is currently investigating the use of checkpoints in the city and the police department has disbanded a controversial unit that helped administer the checkpoints, though the department has not ended the practice.

“You can’t do checkpoints for crime control unless you have individualized suspicion,” he said.

The complaint also points to the drastic increase in the amount of tickets written after the checkpoint program was implemented. The number of tickets issued jumped 92 percent in the first year, according to the court document.

“They seem to be writing an outrageous number of tickets for every individual person they pull over and it seems to be driven by a desire to raise revenue, because the city gets to keep all of the money now,” Charney said, referring to a policy change that now sees revenue from traffic tickets go directly into the city’s general budget fund.

Police Superintendent Byron Lockwood, who took over as the city’s top cop earlier this year, is named as a defendant, alongside his predecessor Daniel Derenda, Mayor Byron Brown, and as many as 34 individual officers.

Lockwood has talked about changing the culture in the department, pushing for a community policing oriented strategy that would see all officers interacting with the community on a more regular basis and seeking to build trust in the most heavily policed neighborhoods.