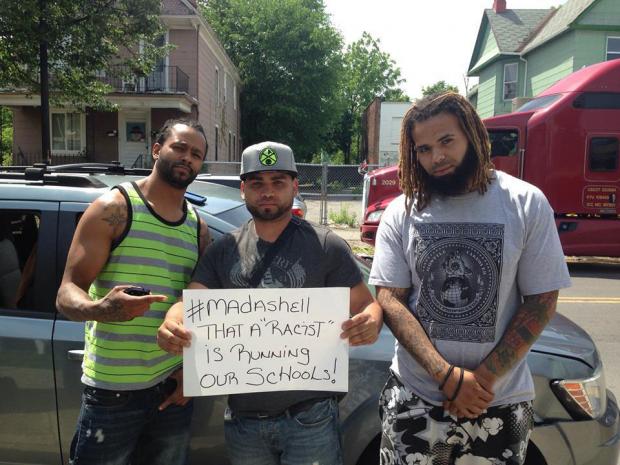 There’s a good reason why we’re seeing a rash of #CanCarl and #MadAsHell tags in social media this week: There’s been virtual silence about Carl Paladino’s latest offensive outburst from Buffalo’s most prominent citizens. So it’s up to the people that this would-be populist represents to call him out.

Rod Watson’s column in the Buffalo News this week debunks the premise that Paladino claimed to be illustrating with his remark about “damned Asians” taking advantage of SUNY’s affordable tuition and lying about their residencies. Watson also raises a question: Why do we tolerate this elected official’s crusades of anger and hate against his many perceived enemies?

He’s a Don Quixote with a darkened heart: Instead of mistaking windmills for giants, he mistakes Asian students for tax cheats. So why aren’t prominent leaders in business or government coming out to criticize the man, at long last, after this latest in a string of gaffes, each one exposing him further as an unenlightened cretin?

The disappointing answer: They have too much to lose.

Paladino is the one of the city’s biggest landlords and one of area’s most prolific political donors—and not just to Republicans. Paladino’s good graces are valuable, especially in the wake of the campaign finance corruption hurricane with Steve Pigeon at its eye.

It goes deeper though: Carl, for all his warts—and sometimes because of his warts—somehow remains a likable person. A local Democrat who has received money from Paladino once told me, to paraphrase: “We don’t agree about anything. He yells, he screams, and when he’s done he points at me and says, ‘You know what? I like you.’”

There’s something anachronistic about Carl that works for and against him. To his cronies, his blunt speech is a refreshing reminder of an era before political correctness. To everyone else, he’s a dinosaur who has outlived his time, carbon-dating himself occasionally by burping out an incoherent invective against his group du jour.

When Paladino translated his longtime billboard activism against the Buffalo Board of Education into an actual campaign for a seat representing his South Buffalo Park District, he vowed to fight every day on behalf of his constituents. But this was the same guy who threatened to take a baseball bat to Albany. When he blared Tom Petty’s “Won’t Back Down” at a no-donations-accepted support-raiser and swore to make it the official song of Buffalo Schools, that should have been taken as a direct threat, and not just to his opponents.

They’ll probably never say this, let alone admit it to themselves, but Paladino has hurt the cause of the school board majority more than he’s helped it. He’s been a colossal distraction and a galvanizing presence that has awoken the rank-and-file of local unions, while embarrassing the community with his unilateral and disrespectful style of leadership. Without Paladino on the school board, chances are pretty good interim Superintendent Donald Ogilvie’s 11th-hour plan to stave off charter school encroachment into public education would not have been necessary.

Paladino is threatening legal action if Assemblywoman Crystal Peoples-Stokes succeeds in securing mayoral control of Buffalo schools. But it’s likely her push for mayoral control would have never happened without the self-inflicted damage levied by Paladino’s divisive involvement on the school board.

In the meantime, don’t expect local power brokers to bite the hand that feeds them. Who will be the one to challenge him? Mayor Byron Brown, who has enjoyed a cozy relationship with Paladino in recent years that may keep a South Buffalo challenger for City Hall at bay? Erie County Executive Mark Poloncarz, whose campaign committee cashes checks from Paladino and must respect his sway, because countywide elections often swing to the right? Howard Zemsky, who is ceaselessly diplomatic and sanguine about Buffalo affairs? Bob Wilmers, who supports the school board majority’s vision of reform? The Buffalo News, whose editorialists, Rod Watson aside, have been sympathetic to his cause? Artvoice, where publisher Jamie Moses describes Paladino as a “friend” and offers him a platform as guest blogger? How about UB President Satish Tripathi—Asian himself, of course, and surely offended by the gross inaccuracies of Paladino’s assumptions about his school’s student body, but forced by his position to steer away from controversy?

You know everyone is keeping their hands planted in their mouths when not even State Senator Marc Panepinto, who enjoys great support from teachers’ unions and isn’t shy to share his convictions, stays silent. He accepts campaign cash from Paladino, too, and his district straddles Paladino’s South Buffalo and includes many pockets of Carl Country elsewhere.

Paladino deserves every #CanCarl hashtag fired off in his direction this week, but it doesn’t change the fact that Paladino is a duly elected official whose actions have probably only served to elevate his folk-hero status among some in direct inverse to everyone else’s disgust.

We should know by now: Carl won’t back down.