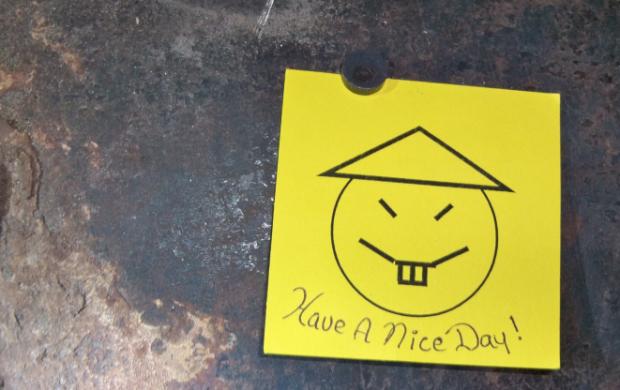 At long last, you can put a fork in the Palinist wing of the WNY Tea Party.

But before we get to the reason why, it bears mentioning that, as much as we can ask where Frank Sedita is when it comes to Preetsmas:

The raids on Pigeon, Casey, and Grant took place on May 28th, and this supposed hero of anti-corruption and good government has absolutely nothing to say about it.

He’s sent some stuff out. He likes that US Attorney Preet Bharara may be getting closer to Cuomo, but other than that he has zero to say about three local political movers being under scrutiny for possible corruption or illegality. Nada. Zilch.

Maybe it’s because Pigeon and Paladino are buddies. Carl has made peace with Byron Brown for business reasons, and Chris Grant is a political ally. So, corruption only matters to Carl Paladino when it’s someone who isn’t a friend or ally. But you have to figure Paladino is a guy who has a lot of very strong opinions, and he isn’t shy about expressing them. So, when the biggest political earthquake in years takes place, you’d sort of expect him to have a field day.

His silence reveals him to be a fake — a phony. The same goes for all of these so-called “tea party” types. They don’t really care about good government or corruption.

But that’s not why the tea party is toast. Paladino and his driver/companion Rus Thompson organized some sort of ammosexual rally in Olean this weekend. The Olean paper was there, and you won’t even believe this. First of all, Thompson and Paladino organized the rally to protest, in part, State Senator Cathy Young, who did something Carl didn’t like. But Young supporters showed up to Carl and Rus’ rally, and outnumbered the tea party by “maybe a dozen”.

Paladino, who arrived about 45 minutes late for the scheduled noon rally, led the group in singing “God Bless America” before speaking for about 20 minutes.

After starting by berating Republicans for speaking without cohesion or leadership, Paladino veered off into what some thought was “borderline” racism by referring to all the “non-Americans walking around” the University at Buffalo campus. Asking “why do we have this huge population of foreigners?” Paladino answered his own question. While they pay higher out-of-state tuition their first year, they soon declare themselves residents, and pay the lower tuition, Paladino stated.

This is because “we have la-de-da legislators,” Republican-in-name-only GOP officials and liberals allied with Gov. Andrew Cuomo, Paladino said.

Later, when he spoke to reporters, Paladino made reference to those “damn Asians coming here to go to school” and keeping local students from educational opportunities.

Late for his own rally. 20 minute diatribe. Quick and pointless lurch to racist xenophobia. Not “borderline” racism, but straight-up anti-Asian animus. Seriously, was he drunk? Who talks this way? Who does it in public? In what way do these, “damn Asians coming here to go to school” appear on the tea party agenda? On Twitter,

@HeyRaChaCha @buffalopundit a WBEN intern and cameraman were there. i had a digital tape recorder, but quality low due to band playing

So, who thinks WBEN is going to publish this video? Me, neither.

But this is the elected member of a school board, going to some public demonstration and expressing anti-Asian bias apropos of nothing at all. Can this be it? Can this be the end of this noxious individual’s political career? How much more does there need to be? Are we done now? Can we stop pretending like this is a serious movement led by serious people?

Russ Thompson of Tea New York, warmed the crowd up for Paladino, outlining how six Upstate Republican senators including Young, “threw us under the bus” by naming Flanagan majority leader to succeed Skelos.

Thompson got into a verbal scuffle with Mark Williams, the county American Legion commander, who was carrying a sign supporting Young.

Thompson made reference to Williams circling the park with the Young sign, at which time Williams, the county’s public defender, walked toward the gazebo waving his sign and saying he was a veteran.

Thompson thanked Williams for his service and asked him to keep walking.

Seriously, these guys can’t even organize a demonstration without being outnumbered by supporters of the person they came to denigrate. They can’t hold an anti-Skelos rally without going after Asian students at UB?!

At long last, can we be done with these clowns?