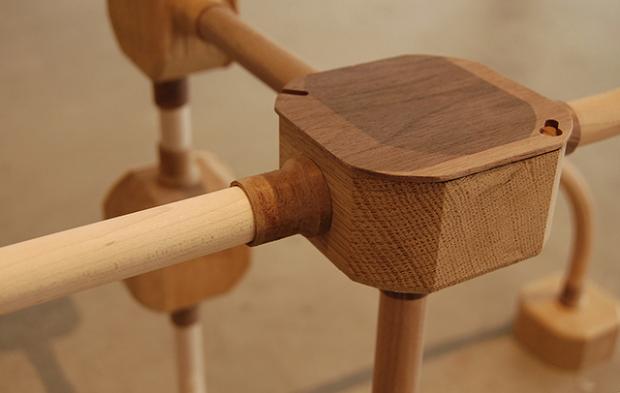 Some pretty uncanny artwork currently on show at Hallwalls. Extremely beautiful work. You can’t help liking it. But you can’t quite figure out what it is, either. How it does what it does. Work by the artist team of Jeremy Boyle and Mark Franchino.

Large and small wooden panels, carefully—lovingly—crafted. Portions of which are translucent. Portions that look precisely like light bulbs, fluorescent and incandescent. That seem to shine—radiate—through the translucent wood. You wonder if these are drawings somehow. Partly because some of them are called drawings. But that’s a bit of a misnomer. Insufficient nomer. Because then you notice a little switch—like a little light switch—on the side of the small panels anyway (which are really more like laminated wood blocks, about an inch thick). That turns out to be an actual switch that turns the light on and off. (The light that shines through the wood panel, or block. That looks like a light bulb.)

You think the term trompe l’oeil. Tricks the eye, fools the eye. But it’s more than that. More like trompe l’esprit. Fools the mind.

There are some panels, and there is some sculpture. A lawn chair. Of the ordinary fold-up sort. Aluminum tubing for the skeleton and armrests, and a weave of plastic webbing for the seat and backrest. Only in this case entirely of wood. Wood for the aluminum, and thin-sliced wood strips—woven again—for the seat and backrest plastic. And a standard lawn or garden accessory trash basket, with lid. But entirely of wood again. In another kind of exquisite artistry than the wooden lawn chair. A kind of marquetry. Perfect-fitted segments of slightly different-hued dark wood in symmetric patterns.

Also, electrical apparatus, in wood. Not the actual electrical elements. Industry-approved electrical cords and plugs and sockets. But wood junction boxes and conduit lines (what might ordinarily be half-inch or so lead pipe). Another sculptural piece is a fuse box or breaker box—or looks like one—wall-mounted, and with wood conduit lines extending from the top of it, one straight up to an actual incandescent light, four others up and then bending to the right and disappearing into an adjacent wall.

The large panels with fluorescent or incandescent lights—there’s one of each type—lack switches. But the fluorescent one at least switches on and off of its own accord. (Possibly controlled by a motion switch. But a quirky one.)

Fine-print media information on an accompanying flyer indicates that the top layer of the panel pieces—that the fluorescent and incandescent lights shine through—is actually paper, and that parts of the lights are pencil drawings. But it all looks like wood. (And paper is wood anyway.)
As light art—art made with light—light as a medium—Boyle and Franchino’s work recalls that of proto and premier light artist Dan Flavin. (The Albright-Knox has some of Flavin’s work, with tinted fluorescent lights.) And duly pays homage to Flavin in another large panel piece, consisting of seven fluorescent lights in a minimalist abstract architectural tower form—tower representation—not wall-mounted, but leaning against a wall. It’s called Monument 1 for D. Flavin.

A little reminiscent of the Empire State Building. Or possibly—because it leans—the Leaning Tower of Pisa. Or possibly—but no, I won’t say it. I wouldn’t propose such an obnoxious association—via over-elaborate bad pun, bi-lingual even—for such beautiful artwork.

The two artists are currently from the Pittsburgh area, but Franchino has his undergraduate art degree from UB. Boyle, in addition to the visual artwork, is a musician, a founding and current member of the Chicago-based musical group Joan of Arc, whose album 1984 is scheduled for release this month.

The Boyle and Franchino Hallwalls exhibit continues through June 29.