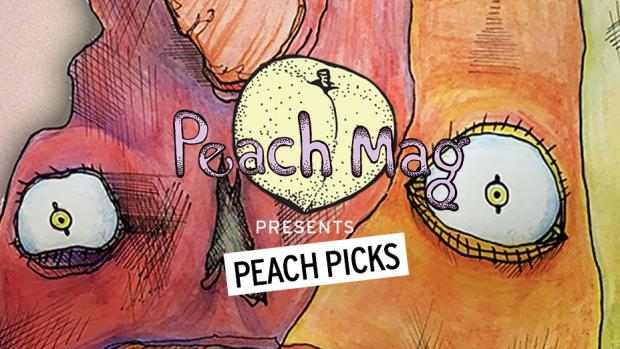 Last Friday Peach published “This Too Shall Pass” by Kevin Bertolero, a featured longlist finalist for the Peach Gold in Poetry prize. Bertolero’s poem has a wandering narrative and a hopefully gentle voice; it feels like a sleepy conversation in bed with someone you’ve just fallen in love with. “We discuss former loves as shadows, our former selves. In photographs I show you I was happy while camping (Pawtuckaway Lake, June 1999), flower boy at my cousin’s wedding, dancing to synth-pop with girls in a middle-school gymnasium. You’ll remember these stories even though I ask you not to.” Bertolero manages to be deeply vulnerable in a way that feels honest. This is new love, when the world becomes imbued with so much magic that even old wounds seem to shine, “seeing our breath in cold air was important, the way you kissed my bruise.”

Soft Skull Press recently released two new novels by Sam Pink in one tête-bêche bound volume. The Garbage Times is classic Pink, following an unnamed narrator as he slogs through a grimy barback job in Chicago, offering up a surreal and strangely empathetic view of the world as he goes. White Ibis is something of a departure from Pink’s oeuvre however, as another unnamed narrator escapes from Chicago with his girlfriend to relocate to Tampa. The change of scenery, especially when put in contrast with the Chicago of The Garbage Times, feels like stepping into another dimension. Throughout both volumes, Pink’s prose continues to balance between goofy nihilism and absolute sincerity. He has always been a writer deeply concerned with the forgotten and abandoned pockets of humanity and that remains true in each of these books. As the narrator of White Ibis observes, “Not everyone has a sash full of skills and a heart full of love.” —MATTHEW BOOKIN