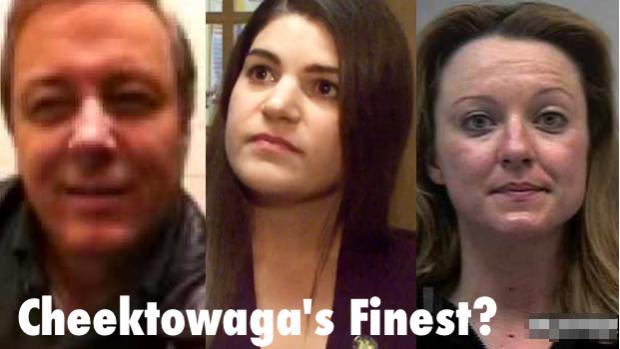 In the Assembly — in Albany - there is a comfortable, albeit old-fashioned leather swivel chair, and the two people who most recently moistened it will have abandoned it in disgrace. The endorsed Democrat, Monica Piga Wallace, is an accomplished lawyer and the very embodiment of responsibility and accomplishment. Wallace’s new challenger, Kristy Mazurek, is under such a thick cloud of suspicion that, were she already serving as an elected official, she’d be called on to resign. For Democrats, the contrast couldn’t be more stark.

Dennis Gabryzsak resigned amid a flurry of allegations that he sexually harassed his female staffers. Gabryszak’s behavior was inexcusable, and the timing was fortuitous for people aligned with perennial pseudo-Democratic gadfly, G. Stephen Pigeon and his band of co-dependents. Gabryszak’s fall coincided nicely with the re-election campaign of Senator Tim Kennedy - the A-143 and Kennedy’s district share Cheektowaga and part of Depew — and a competitive Democratic primary for the assembly seat in 2014 would artificially bolster white Cheektowagan turnout for Kennedy, thwarting Betty Jean Grant’s second effort to unseat the incumbent. In 2012, Grant had come excruciatingly close to ousting Kennedy, but Kennedy was prepared in 2014, and won handily.

Also in 2014, longtime Democratic operative Camille Brandon was running as a Democrat for A-143, and she had the support of both Democratic HQ and breakaway Democrats led by Frank Max.  But helping Tim Kennedy trumped unity, so Pigeon and Mazurek ran a primary using Mazurek’s brother, Mark, who went on to win the September primary. Mazurek’s campaign faltered in November, however, and he lost to current occupant/disgrace Angela Wozniak. Mark’s sister, Kristy ran his campaign effort that year. It wasn’t a failure, though. The larger mission was accomplished in September for Kennedy.

For her part, Kristy Mazurek is the former host of “2Sides”, a political talk show she co-hosted with a variety of Republican operatives such as Stefan Mychajliw and Michael Caputo. In 2012, Mazurek ran the failed David Shenk for Comptroller campaign against Mychajliw. Throughout her return to WNY, she has been aligned with Steve Pigeon, and at war with Democratic HQ.

In 2013, Mazurek was famously the treasurer for the WNY Progressive Caucus, or “AwfulPAC”. That campaign committee’s campaign finance irregularities led to the May 28, 2015 raids of the homes of Steve Pigeon, Steve Casey, and Chris Grant, (a.k.a. “Preetsmas”), ultimately leading to the recent empaneling of a special Grand Jury to investigate any and all crimes arising out of that commitee and those searches.

The Buffalo News reported in mid-2015 that investigators had questioned Mazurek, and that her home wasn’t raided because she was cooperating with law enforcement.

As it stands now, AwfulPAC maintains an outstanding $15,000 campaign debt owed to printing firm Marketing Tech, last reported in its January 2015 disclosure. AwfulPAC also last disclosed over $26,000 cash on hand in that same disclosure, so query why it hasn’t yet satisfied that debt to Marketing Tech. Since then, AwfulPAC has filed, “no activity” statements.  Mark Mazurek’s Assembly campaign committee last reported $900 on hand, and has failed and refused to make mandatory financial disclosures to the Board of Elections in January and July of 2015, and January of 2016.

The Public revealed the extent and ongoing nature of federal tax liens that the IRS has filed against Steve Pigeon, calling into question his proclamations of financial liquidity to the Buffalo News’ Bob McCarthy, and selective revelation of his tax returns. For a guy who told Bob McCarthy he could easily afford personally to funnel hundreds of thousands of dollars into obscure political committees, he found himself facing:

That’s almost $337,000 in federal tax liens alone. The suspicion is that federal investigators with access to Pigeon’s financial records could see money passing through his accounts for political activities, which Pigeon perhaps didn’t report as income.

Similarly, Mazurek finds herself the subject of federal tax liens as follows:

Could it be that at least some of these liens are the fruit of the Preetsmas raids? Could law enforcement with access to banking records have revealed monies flowing through Mazurek and Pigeon’s accounts for political purposes from other sources? Money that should have been declared as income, but wasn’t?

Mazurek’s candidacy has been rumored for some time, and a post on a particularly irresponsible local blog announced/press released it thusly:

Socialite: ‘sōSHəˌlīt/ (n) ”a person who is well known in fashionable society and is fond of social activities and entertainment.” “A socially prominent person”. I am not aware of the qualities and qualificiations that being a “socialite” might lend to someone running for office, but it seems to be a euphemism for “unemployed”.

In this, the year of anti-corruption sentiment, it seems an odd choice to elect to the Assembly a person so close to an ongoing federal and state investigation. As for the “little known candidate”, that’s Monica Piga Wallace, a law professor at UB with over a decade’s experience as the confidential law clerk for a federal court judge. She’s a wife and mother with an adorable family, and any party chairman, regardless of political affiliation, would count himself lucky to have such an excellent outsider/newcomer candidate run for elected office.

Mazurek is a formidable political contender with fundraising prowess and a well placed network of supporters. The consummate activist, Mazurek has been involved in local politics since she was a child and her father represented the Polonia neighborhood on the County Legislature. Mazurek is a Cheektowaga resident and Chairperson of the town’s Polish Heritage Festival.

Mazurek is almost $30,000 in arrears to the federal government for unpaid income taxes, her activities as treasurer for AwfulPAC find her in the center of an ongoing criminal investigation, the campaigns she has been most closely affiliated with (Shenk, Moore, and Mazurek) were all failures, and her fundraising “prowess” amounted to $38,500 for her brother, not including thousands in family loans. By contrast, Conservative fusion Party candidate Angela Wozniak — who defeated Mazurek’s candidate in 2014 — quickly raised close to $60,000 in a traditionally Democratic district, not counting $30,000 in Republican PAC money.

Jeremy Zellner, beleaguered by controversy relating to a 2014 incident in which he was perceived to be extorting bribes from judicial candidates, is backing Mazurek’s opponent. Zellner’s leadership of the Democrat Party has attracted much scrutiny. The chairman’s ouster is expected at the next party reorganization meeting later this year.

Translation: some people have an acute, chronic, exhausting case of butthurtitis and sour grapes over Steve Pigeon’s ouster as Erie County Democratic Chairman over a decade ago. Inter-party squabbles like this swing from cold to hot every so often, and Mazurek, who is busy accepting service of legal process for Pigeon at his former apartment, is merely doing her boss’ bidding.

This is how Mazurek announced her candidacy:

Nothing about ethics and corruption in Albany. Nothing about public service. Nothing about what she might do differently from her predecessors, or a hint at what her platform might be. Nothing about how she is more qualified or better suited than, say, Monica Wallace. With this Facebook post, Mazurek lays bare her entire reason for running: this isn’t a campaign. It’s a vendetta.

Remember: even though Albany corruption matters, Donald Trump shows us that 2016 is the year of grievance politics, and for that Mazurek has a deep well.

Mazurek alleges that she reported Gabryszak’s “attacking behavior” to Len Lenihan and Jeremy Zellner, and, I suppose, she’ll say they did nothing about it. But even if true, party bosses aren’t in charge of an Assemblyman’s behavior. An Assembly staffer who is subjected to “attacking behavior” at the hands of her boss has other channels to use. There is a grievance procedure spelled out in the Assembly rules, for instance. Had Mazurek followed that, she would have complained to the Counsel to the Majority. If attacked, she could have gone to the police. She could have brought a lawsuit. Complaining to Lenihan and Zellner seems odd, especially if she’s alleging that another party boss, like Pigeon, would have acted differently. Perhaps all of this is prologue to the inevitable, failed attempt to oust Zellner at the party reorganization later this year. The court’s dismissal of Mazurek’s complaint against Gabryszak is up on appeal, but why wait over three years to bring suit? Why blow through and past the statute of limitations? Was it because the timing was inopportune before November 2014?  How? Gabryszak resigned in January. Election day was November 4th.

In her complaint, she mentions only complaining to Gabryszak’s chief of staff, Adam Locher. Not to Zellner nor Lenihan. The Cheektowaga electorate may be attracted to Mazurek’s surname and grievances, but on the issue of ethics and accomplishments, Mazurek has a very steep hill to climb.

One thing is for sure, in a year where Albany corruption, ethics, and good government are at the fore; in the year where both Sheldon Silver and Dean Skelos were tried, convicted, and sentenced for crimes arising out of their theft of honest services, it seems beyond odd for a key player in an ongoing local political corruption scandal to run for elected office. We have our Preetsmas candidate.