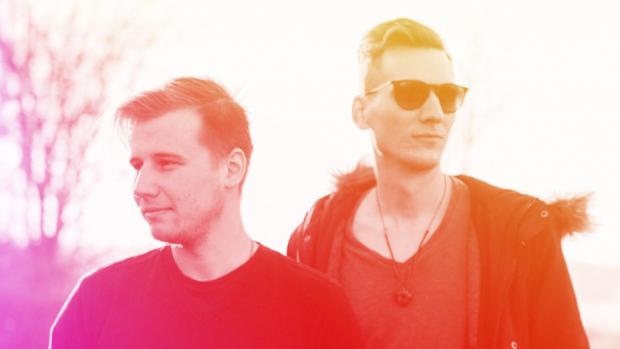 Partying on a patio on a summer day in Buffalo with hometown boys Kyle Tatum and Brian Doyle, better known as Eyes Everywhere, is something every resident should do as often as possible. It’s a rejuvenating experience—dancing in the sunlight to bassy house music. The duo’s most recent party was last weekend on the back patio of Preservation Pub in Allentown, where they shared the outdoor DJ booth with the Detroit-based DJ pair Golf Clap. The show served as an “official pre-party” for Detroit’s Movement Festival, the annual house and techno bash that happens each year in downtown Detroit. One of the special things about Movement Festival is the abundance of after parties—official and otherwise—that happen in the heart of Detroit throughout the entirety of the festival.  What’s become popular in the last few years are these pre-parties in various cities—from Miami, to Austin, Toronto, Chicago, and now in Buffalo, thanks to organizers Eyes Everywhere, who put in hard work to create a place for local fans of the festival, and of electronic dance music in general, to have a meeting place beforehand.

For the music festival, the duo—who have released records on well-known dance music labels like Fools Gold, Main Course Anabatic Records, and Country Club Disco—will post up on a large boat with their friends Golf Clap for a dance party called Shipfaced, so if you’re in the Motor City this Memorial Day Weekend, keep an eye out for them. If not, you’ll have a chance to catch Eyes Everywhere at the first ever Cobblestone Live! Music Festival, where they’ll join a bunch of Buffalo-based acts and a few well known national acts, such as indie rock band Real Estate and jam band Moon Hooch, for the two-day festival, this July 15 and 16 in Buffalo’s Cobblestone District. After that, they’ll ship out to the West Coast for some late summer tour dates, but we’re getting ahead of ourselves now. Summer has only just begun, so we asked the guys from Eyes Everywhere to put together their ultimate summer playlist. And they came through with an awesome list of house, rock, hip hop, and more that’s perfect for a long bike ride or just a lounge by the pool. Read their list of choices below and check out our playlist at dailypublic.com

Housey vibes and the best bridge I know. The perfect hybrid of dance groove and stoney aesthetic with pop sensitivity.

“Back to Back”
By P Money, Audioslugs and Little Dee

The absolute grime track of the summer. No chorus, just verses on verses from some of the best in the game and a beat that screams windows down, gun fingers up.

For the fourth straight summer, “Forget” is what I’ll play when I’m really feeling myself. It’s the best house song made in the last five years—iconic on the level of Julio Bashmore’s “Battle for Middle You.”

“Bout That”
By Eyes Everywhere and Golf Clap

Kendrick told me to be humble, but this one is road-tested. It’s banging in clubs from California to Sweden to our beautiful Buffalo. Tech house fans the world around agree it’s perfect for park, the whip, or the after party.

Siamese Dream was superior to Mellon Collie in every way, and this is a sun-baked beauty from Chicago that sounds like the road from LA to Santa Barbara.

Hot Take: Cam, Killa Cam, Camron Ezike Giles is top three East Coast hip hop of all time. “Hey Ma” is the New York summer anthem magnum opus. Tuneheadz (producer) and Dipset created an anthem that makes you feel like you are at the dopest party you have ever attended even if its you, and the homies in the car on the way to some shitty bar.

“We’rewolf”
By Every Time I Die

I mean, you guys knew there would be at least one ETID song on here, right? Since we are talking summer tunes I feel I would be remiss without mentioning “We’rewolf.” “I didn’t put my hair up into a ponytail for nothin’, so if I’m goin’ home alone, I ain’t goin’ at all.”

The Weeknd cosigned this dude recently, and signed him to his XO imprint. Party anthems with no crazy deep meaning; really just perfect summer fodder. Melodic rap and one-liners = summer car banger. It’s gonna be a big summer for this dude.

Fanciulli is gonna Fanciulli. The dude pretty much wakes up in the morning and pisses excellence. No surprise that he took an already dope record and made it bangable in a tech house set. Also, this features Vince Staples on vocals. I could rant for quite a while on how underrated he is. Go peep Summertime 06 if you haven’t yet.

We are two years after this album coming out now, and I am still not over it. It’s perfect front to back. This track specifically, though, just feels like the perfect summer track. The dancehall influence and the steel drum set the vibe for me. Popcaan spits his game. Young Thug rides the beat perfectly, or, as he would put it, “like a stroller.”