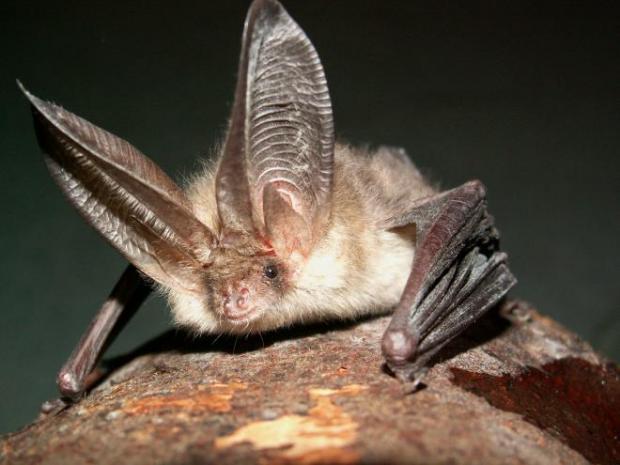 Northern Long-eared Bat recieves some protections on its march to extinction.
by
Jay Burney
/ Apr. 26, 2015 11am EST

Since 2006 and in less than a decade, 6.7 million bats have vanished in the United States. This is primarily but not exclusively due to a disease called “white-nose syndrome.” This disease was first noted near here, in a wintering cave in Schoharie County, NY. The kind of cave is also known as a hibernaculum. As many as 99% of some of our most familiar species of our critical insect eating bats have vanished since then -including almost all of those right here in Western New York.

This month, the northern long-eared bat (Myotis septentrionalis), was listed by the US Fish and Wildlife Service as a “Threatened Species.” The bats’ range covers 37 US states including much of the Northeast and all of Western New York and Erie County. The disease is infecting bats in mostly the east of North America.

This ruling, which refers to white-nose syndrome as one of the primary causes of the species decline, offers some protection under the Endangered Species Act. According to the USFWS, Erie County is known to have infected hibernacula. The USFWS plan also comes with a special rule that eliminates “unnecessary regulatory requirements for landowners, land managers, government agencies and others” in the range of this bat. This includes allowing many commercial activities known to be harmful to bat populations.

According to a press release from the Center for Biological Diversity (CBD), which has been advocating along with other bat conservation organizations and scientists for full Endangered Species designation and protection, the listing as “Threatened” instead of “Endangered” and the special rule represents a backpedaling bow to industry and does not reflect sound science.

“In areas outside the current white-nose syndrome zone, the rule allows virtually all habitat-destroying activities to go forward, including clear-cutting, fracking and construction of pipelines. Even within areas already affected by the disease, the rule allows logging and other activities that might harm northern long-eared bats as long as they are not conducted in early summer when baby bats are first born, or occur more than a quarter-mile from known roosts and hibernation sites.”

“This decision is a significant step backward for the bat’s conservation. In 2013 the [Fish and Wildlife] Service recommended the northern long-eared bat be protected as endangered. But the timber, oil and gas, mining and wind-energy industries, among others, hotly opposed the bat’s listing because of fears the bat’s protection would cut into short-term profits. Conservative politicians from Pennsylvania to South Dakota have spoken out against listing the species, and some members of Congress have gone so far as to introduce legislation that would block the Service from protecting the bat.

“These bats are losing more ground every day to a devastating disease, and instead of providing strong protection for the survivors, the Fish and Wildlife Service has given the green light to logging, oil and gas drilling, mining and other habitat-wrecking industries. Weakening protections for the northern long-eared bat when it’s just barely surviving white-nose syndrome is like sucker-punching a cancer patient.”

The Center for Biological Diversity has filed a lawsuit asking for declaratory and injunctive relief requesting that the court before the US District Court for the District of Columbia (1) declare that the Service’s failure to engage in a public process and prepare either an environmental assessment or environmental impact statement analyzing the potential environmental impacts of, and alternatives to, the interim 4(d) rule, prior to adopting it, violated NEPA and is unlawful; (2) vacate the interim 4(d) rule and remand it to the Service; (3) award Plaintiff fees and costs; and (4) grant such other relief as the Court deems just and proper.

In January more than 80 bat scientists sent a letter to the Fish and Wildlife Service and Department of the Interior calling for the immediate protection of the northern long-eared bat as endangered. The scientists cited voluminous scientific data showing that the Northern Long-eared Bat is in imminent danger of extinction, and made clear that the survival of the species depends on safeguarding remnant populations from all other sources of harm.

The public is invited to comment on this interim rule as the Service considers whether modifications or exemptions for additional categories of activities should be included in a final 4(d) rule that will be finalized by the end of the calendar year. The Service is accepting public comments on the proposed rule until July 1, 2015 and may make revisions based on additional information it receives.

The Value of Bats

“Bats are a critical component of our nation’s ecology and economy, maintaining a fragile insect predator-prey balance; we lose them at our peril,” “Without bats, insect populations can rise dramatically, with the potential for devastating losses for our crop farmers and foresters. The alternative to bats is greater pesticide use, which brings with it another set of ecological concerns.”

Why is the northern long-eared bat in trouble?

-White-Nose Syndrome: No other threat is as severe and immediate as the disease, white-nose syndrome.  If this disease had not emerged, it is unlikely the northern long-eared bat would be experiencing such a dramatic population decline.  Since symptoms were first observed in New York in 2006, white-nose syndrome has spread rapidly from the Northeast to the Midwest and Southeast; an area that includes the core of the northern long-eared bat’s range where it was most common before this disease.  Numbers of northern long-eared bats (from hibernacula counts) have declined by up to 99 percent in the Northeast.  Although there is uncertainty about the rate that white-nose syndrome will spread throughout the species’ range, it is expected to spread throughout the United States in the foreseeable future.

-Other Sources of Mortality: Although no significant population declines have been observed due to the sources of mortality listed below, they may now be important factors affecting this bat’s viability until we find ways to address white-nose syndrome.

-Impacts to Hibernacula:  Gates or other structures intended to exclude people from caves and mines not only restrict bat flight and movement, but also change airflow and internal cave and mine microclimates.  A change of even a few degrees can make a cave unsuitable for hibernating bats.  Also, cave-dwelling bats are vulnerable to human disturbance while hibernating.  Arousal during hibernation causes bats to use up their already reduced energy stores, which may lead to individuals not surviving the winter.

-Loss or Degradation of Summer Habitat: Loss or Degradation of Summer Habitat:  Highway construction, commercial development, surface mining, and wind facility construction permanently remove habitat and are activities prevalent in many areas of this bat’s range.  Forest management benefits northern long-eared bats by keeping areas forested rather than converted to other uses.  But, depending on type and timing, forest management activities can cause mortality and temporarily remove or degrade roosting and foraging habitat.

-Wind Farm Operation: Wind turbines kill bats, and, depending on the species, in very large numbers.  Mortality has been documented for northern long-eared bats, although a small number have been found to date.  However, there are many wind projects within a large portion of the bat’s range and many more are planned.