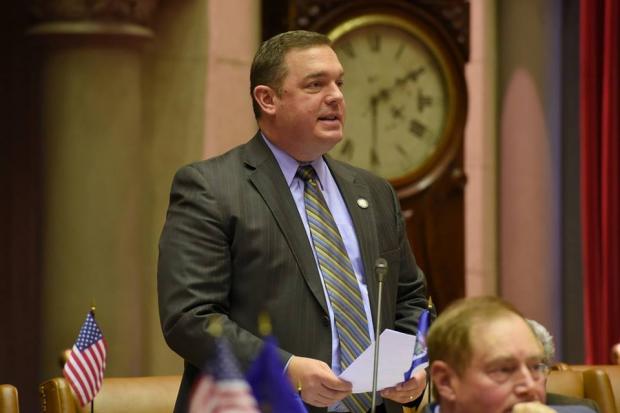 Walter, as The Public’s Alan Bedenko points out in his online column, is taking one for the team. Popular in his district, Walter has little name recognition anywhere else. He is not well positioned to raise the million dollars or so a credible campaign will need to take on Poloncarz, whose polling shows the incumbent to be popular and generally regarded as quietly efficient and scandal-free.

Bedenko ends his column with a fine point: How come the GOP hasn’t rolled out Erie County Legislator Ed Rath III as a challenger to Poloncarz? He’s got money and his last name is on the county office building. My guess: Rath isn’t interested in losing any more than Mychajliw or Jacobs. All three harbor ambitions for higher office and may not want to tarnish their brands and fatigue their fundraising capabilities (substantial for Rath and Jacobs, less so for Mychajliw) on a race that they’ll probably lose. Who knows what Mychajliw will run for next. Either Jacobs or Rath might wait for a better shot at county executive in four years. Rath may hope to become a state senator some day. Jacobs might run for Congress or try to become the first Republican mayor of Buffalo since Chet Kowal.

Walter, on the other hand, is a Republican in the New York State Assembly. That’s a lonely job. He may not feel like he has much to lose, and filling the ballot line gives him chit to cash in with the party at some later date.

The rain keeps coming down on the Buffalo Municipal Housing Authority. Last Tuesday, March 31, the Buffalo office of the US Department of Housing and Urban Development—the federal agency that funds BMHA—sent a troubling letter to BMHA’s board of commissioners. In the letter, HUD informs BMHA that is had been “designated Substandard by HUD” for the fiscal year that ended in June 2013. The letter goes on to explain the principle reason for the judgment:

Generally, when a public housing agency becomes management substandard, it has failed to maintain an acceptable occupancy level in its developments. This is the main cause for the substandard score for the BMHA. The BMHA currently has 598 vacant units, and an overall occupancy rate of 84%. The waiting lists for both of BMHA’s Section 8 programs are closed, as are those at Belmont Shelter Corporation and the Rental Assistance Corporation of Buffalo for the fact that they are too long, ands people are waiting years to get a voucher in order to obtain assisted housing, while nearly 600 units of public housing sit vacant and deteriorating.

HUD points out that all 170 units in the A. D. Price Courts housing development are empty, as are 279 of 414 units at the Perry Homes project. When HUD raised concerns about the vacancy rate at Perry Homes in 2013, BMHA argued it was keeping the units intentionally vacant in hopes of winning redevelopment funding for the site through HUD’s Choice Neighborhood program. BMHA bulloxed its application for that grant, however, “will not proceed with any new development directly on that site due to presumed lack of municpal support for any projects on that location.”

It must be emphasized that those units intentionally left vacant in anticipation of…future development pursuits will continue to be counted against the BMHA, and can potentially lead to an overall troubled status when the Department scores BMHA [for fiscal year 2014].

HUD informs BMHA that it has 30 days from receipt of the letter to create and adopt a recovery plan that will lead to an overall occupancy rate of 93 percent or better. “BMHA is in a precarious financial position,” the letter says, affirming recent reports that the authority’s fund balance has dipped dangerously low. “It is imperative that specific corrective actions be taken as soon as possible to avoid potential receivership.”

HUD sent copies of the letter to each commissioner (except, curiously, Hal Payne) and to Mayor Byron Brown, who appoints all but the two commissioners elected by BMHA residents.

How’s this for a sympathetic note: While casting her yes vote on Governor Andrew Cuomo’s budget, Bronx Democrat Carmen Arroyo said that teachers who didn’t like the newest evaluation protocol should “go work at McDonald’s.” Read Shane Meyer’s analysis of the issue. And while you’re at it, have a listen to “Public Speaking,” the new podcast by Buffalo’s strangest agent, Pat Kewley.