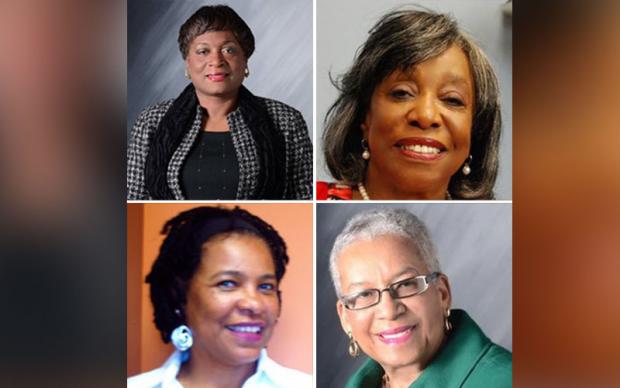 In response to the Board of Education majority’s plan to promote a local administrator into the role of deputy superintendent—to be then promoted to super following the departure of Donald Ogilvie—the four board minority members have called for a national search for superintendent.

The minority members—Barbara Seals Nevergold, Sharon Belton-Cottman, Teresa Harris-Tigg, and Mary Kapsiak—held a press conference on Wednesday to call for openness and comprehensiveness in the search, including community for input.

They presented a resolution at the March 19 Board meeting, requesting as much, but it was defeated in a 5-4 vote.

Now, the members will hold four community events to give parents the opportunity to say what they’d like to see from a prospective superintendent. Two meetings are already scheduled (April 14 at PS 81 at 6pm, and April 16 at PS 99 at 6pm), while the other two are unscheduled.

Nevergold made it clear that undertaking a national search does not disqualify local candidates and encouraged their applications. She said it was about making the search an “inclusive process and a broad process,” rather than the “narrow process,” which, according to her, is what’s happening now.

The most insurmountable issue facing the minority members is that they are outnumbered—a disadvantage which they hope may be reversed with the help of community power.

“We know that changes can be made,” observed Kapsiak, in all probability hinting at recent riffs among the five majority members, adding, “majorities [can] turn into minorities.”

Kapsiak also disagreed with the argument that bringing in a candidate from outside the city would be impractical because of the Board’s sometimes sharp divisions. Any truly competitive candidate should welcome the challenge, she reasoned:

“We look at Buffalo and we think we’re unique—quite frankly we’re not unique. There are many other districts across this country that are in similar positions…and yet there are superintendents who can stand up and take over the reins and have the ability to bring the district together and bring the board together.”

The major issue is one of time—as Nevergold noted, the previous search took about nine months—and the majority seems hard-up for immediate change. June 30 is Ogilvie’s last day, by which time the majority would probably like his replacement at the work of “dismantling” (to borrow a phrase from Board member Carl Paladino) BPS.

The irony is that Ogilvie, who performed something resembling a miracle in bringing the Board together for a 9-0 vote in February, was the majority’s hand-picked man for the job.

Yet, according to Paladino, in his recent resolution to have Ogilvie fired, accused him of “violat[ing] the representations made by him to BOE members prior to his appointment to the Superintendent position and further betrayed the trust given to him by members of the BOE when he failed to keep his promises to begin the implementation of elements of the reform agenda.”

Two questions require thoughtful analysis: 1) is the implementation of the majority’s reform agenda—in a way that would satisfy such grand impatience—a possibility from an operational standpoint; and, 2) if so, is the Board majority capable of finding the person to implement it? To both questions, the word ‘no’ resonates loudly in my own head, along with the reflections of those who insist that meaningful, large scale change takes patience, the contributions of various stakeholders and timely doses of compromise.

Notwithstanding the present impasse, Belton-Cottman is convinced that the “new wave” of “parent and community involvement” in public school matters will be the catalyst for a sensible decision making process:

“It’s unacceptable to have a preconceived agenda without even involving the four of us—we are elected officials, who represent districts and constituents. That you would put together your proposals and ideas without [consulting us]—in essence you’ve disenfranchised a group of people who we represent.”