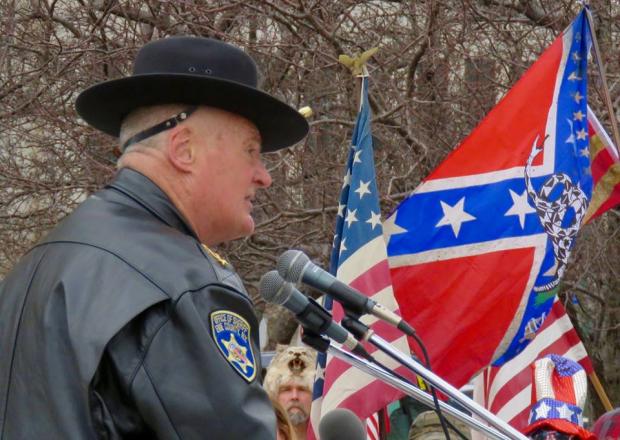 The “Spirit of America” rally held last Saturday afternoon in Niagara Square was meant to be a show of support for the current president, to counter the perception created by large protests that have sprouted since the election of Donald Trump. There was far more spirit to be found in the back, behind the police line, where counter-demonstrators held an impromptu queer dance party to stay warm.

In the crowd of maybe 150 supporters—there were around 50 counter-demonstrators—there were no fewer than three Confederate flags. There’s a specious historical argument to make about the flag that some hide behind, but considering that, historically, any New Yorker would have been killed by forces defending that flag, we all know what the flag really means.

The rally’s speakers included three elected officials: David DiPietro (NY Assemblyman), Tim Howard (Erie County Sheriff), and Carl Paladino (Buffalo Board of Education). DiPietro helped organize the event, but was not present on Saturday. How any of them could in good conscience accept praise and support from someone carrying a Confederate flag in Buffalo in 2017 boggles the mind. The only thing the flag could stand for in this context is white supremacy.

As I was leaving early, I saw Horace Scott Lacy, the same guy who admitted to dropping neo-Nazi leaflets in Lewiston last week, walking up in a group of four, one wearing a White Lives Matter shirt. Lacy, it appears, is living in Niagara Falls and is actively recruiting for his group, the Aryan Renaissance Society.

Another man wearing a “Fuck Cuomo” shirt with the “F” and “K” spelled with assault rifles, held a sign criticizing Senator Charles Schumer, where both “S”s were written in the style of the Waffen-SS. Another historically significant group of people.

The speakers attempted to make the rally about freedom and democracy. Based on the signs and shirts being worn, if the gathered had been polled, Second Amendment rights would have figured large as motivating factor for many. Rus Thompson, newly convicted of voter fraud, talked about how we had to defend all of our Constitutional rights. As he spoke, members of the Buffalo Police Department’s Strike Force, whose daily vehicular checkpoint appears to be a blatant violation of the Fourth Amendment, kept the distance between the supporters and counter protesters, warning those who crossed the makeshift line.

When Sheriff Howard spoke, the counter-demonstrators read off the names of those who have died in the holding center, and at the hands of the Buffalo Police. When Carl Paladino assumed the microphone, the countdown of days since four separate petitions asking for Paladino’s ouster from the school board landed on the state commissioner’s desk began, followed by chants. He mumbled something about everyone’s First Amendment rights for speech and walked off. He didn’t last five minutes.

The entire rally, planned to last until 3pm, but it all ended around 2:30pm. I suppose all that spirit was too quickly used up; besides, it was getting cold out there.

UPDATE: The initial reporting on this rally made by The Buffalo News, WIVB, and WGRZ have scrubbed any image of three Confederate flags and have not mentioned the flags nor the presence of Horace Scott Lacy at the event in their reporting.