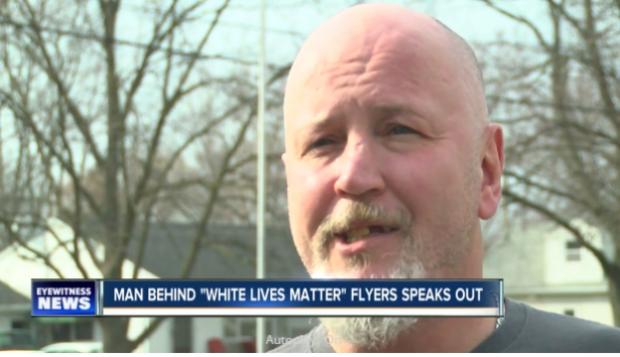 Some people living in Lewiston say someone is spreading racist fliers across the village. They were found on driveways on three different streets Thursday morning.

Lewiston Police told News 4 they received about 20 complaints from residents that were alarmed and outraged.

“I hope whoever has done this knows that they are not welcome here,” said Wendy Swearingen, resident.

Dozens of people found baggies filled with fliers in their driveways that they say are clearly racist. The baggie contained three fliers- all informational about white lives matter, stopping illegal immigrants and black on white crime. On the bottom of the flier were two hashtags, one said Aryan Renaissance Society.

“It was like a supremacist type letter, something I’ve never seen in my life before,” said Linda Alaimo, Lewiston resident.

Lewiston Police say none of the fliers advocated any violence or threats.

“The content doesn’t really rise to the point of being a criminal act because again there’s nothing in there, just informational. The only thing we’re looking at and the reason that we looked into that is because of the distribution, the way they distributed them because they were left and thrown on driveways, so technically that would be a littering offense,” said Chief Frank Previte, Lewiston Police Department.

Chief Previte says they’re looking into possible suspects, but he doesn’t believe the person lives in Lewiston. He says he’s never seen anything like this before.

“It’s the first time we’ve ever had something of this nature in our jurisdiction,” said Previte.

“I’ve never seen anything like that the whole time I’ve lived in Lewiston and I grew up in Lewiston,” said Alaimo.

People in the neighborhood say this kind of act will not be tolerated.

“People are becoming emboldened to become more racist and it’s very ugly and we don’t want it here,” said Swearingen.

The fliers were mostly left on driveways on Mohawk street, Chicora and Lower River road. Because the fliers don’t contain any threats, police say the only thing they can do at this point is charge whoever is responsible with a violation.

From WKBW Eyewitness News (the video embed link is broken, so catch the link instead):

Why? “The purpose of these flyers is to raise awareness with whites about the plight our people face in this country,” he said.

Lacy is new to the area and chose to leave the flyers in predominately white areas based on a suggestion from a friend. He said all of the information is factual. “There was crime statistics based on race which is part of the FBI database. It’s not something fabricated out of the blue, you know?”

Blair Hoplight is one of several dozen who woke up Thursday morning to find a “stop illegal immigration” flyer inside a plastic bag on his driveway. “This gave me the impression they were putting other people down. That doesn’t work. It’s not going to make our country any better,” he said.

Lacy sees things differently. “I consider myself a racist but not because I believe in hatred towards anybody else. It’s because I love my own people.”

Lacy said he’s actually received positive feedback since he distributed the flyers. That’s why he plans to hand the out in other communities. He says he won’t stop standing up for what he believes in.

From the Anti-Defamation League:

Horace Scott Lacy.  Lacy is another ARS member from the Houston area; like Chism, he is one of the oldest WLM activists, born in 1967. Before Lacy was involved with ARS, he was a member and “special assignments major” in the large and violent Texas-based white supremacist prison gang known as the Aryan Circle. He became an Aryan Circle member in the 1990s and was still a member as late as 2009. Lacy is a felon with an extensive criminal history dating back to 1985, including convictions for possession of a controlled substance, aggravated robbery, and multiple theft charges.  He was arrested in April 2016 on aggravated robbery charges.

What does Mr. white pride have to be proud of?

In case anyone’s wondering, the flyers weren’t just filled with what “some say” are racist things; they’re racist, full stop. Mr. Lacy can come here from Texas and condescend to tell us about all the white pride he has, but the flyers aren’t about positivity and pride — they’re about hatred of anyone not white, and demonization of immigrants and minorities.

That’s “Voice of the Aryan Renaissance Society”, which the ADL says is a, “…small but long-lived white supremacist group that has resembled both a racist skinhead group and a prison clique at times. It has had members from a variety of places, but many came from Texas and New Jersey. Its logo is a phoenix image superimposed with a lightning bolt and a runic symbol.

.@NYGovCuomo urged state police to investigate the matter yesterday. Likely facing a littering offense and not any kind of hate crime. @WKBW pic.twitter.com/tjEHE276mf

The trash that organized a Nazi rally last year in Cazenovia Park used to be in with the “Renaissance” society.

A similar shit lit drop happened in Connecticut, and someone did a little digging — it didn’t take long to find a swastika. Take a ride down the hashtag train, and it’s all a bunch of nobodies yelling about how “diversity is code for white genocide”.