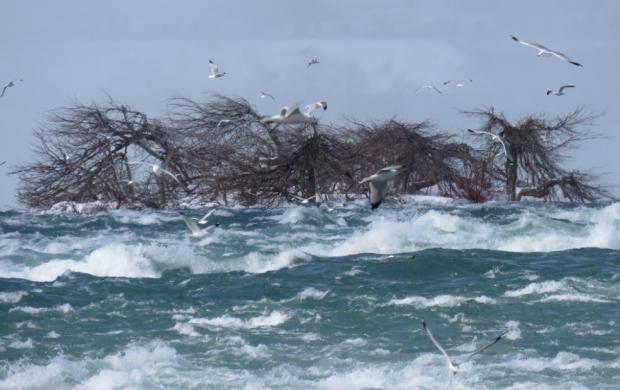 We live in a time when earth’s ecological systems are stressed beyond breaking. Human activity and our impact on these systems, as I am sure that most are aware, include climate change, loss of habitat, and unfettered and inappropriate development that has but one purpose-short term profit.

Clean water has become increasingly difficult to access for many of our global citizens.  Our region sits on the Great Lakes which hold one fifth of the world’s fresh surface water.  Readers of GreenWatch will know that we often write about our failing capacity to maintain the lakes as clean potable water sources.

The Obama Administration invested nearly 8 years in trying to come up with new Clean Water Rules,  Substantive public hearings, meetings, discussions, and reviews involving logistics, science, economic impacts, politics, and trying to find a fair and balanced playing field preceeded the announcement in 2015 of a new comprehensive Waters of the United States (WOTUS) which did not implement any new regulations, but rather helped to define what kinds of waters would be protected under the Clean Water Act.

In February, Scott Pruitt, the EPA Administrator that came from Oklahoma and spent his entire career as Oklahoma Attorney General sueing the EPA on behalf of energy and other corporate polluters, announced that the EPA will suspend the rule, effective immediately.  It can be argued that rules and regulations, appropriately arrived at by the kind of public process that took place under President Obama, help make a democracy strong.  Unilateral dissasembling of these careful and deliberate laws and lawmaking processes will do harm for generations. Currrently challenges to this rollback are roiling through the courts.

President Trump is smashing though environmental safeguards like the proverbial bull in a china shop. His advocacy of coal, and his illiterate attack on our nations future will end up costing trillions of dollars, and lives.

This week, Scott Pruit scrapped Obama era rules effecting the disposal of coal ash, the nations second largest source of toxic pollution. Coal Ash contains arsenic, lead, selenium and other materials that are dangerous to human health and are one of the largest contributors to groundwater and waterway pollution.

We need to be reminded that the former CR Huntley Generating Station is the location, on the Niagara River, of substantial coal and fly ash deposits including ponds and landfills.  These sites are alledged to be leaking into the river. Now we may not be able to contain them, because, you know, its not cost effective for industry and the disaster capitalists.

The first is a rebroadcast of last years Tundra Swans on the Niagara, shot just outside of the Huntley Generating Station site. Here is a link to the GreenWatch Sunday from February 25, 2017.

Here is the video:

The second video for today was shot on Saturday March 3, 2018 at Niagara Falls. A snowstorm fell on our area late last week and left Three Sisters Island, part of Goat Island just above the falls, covered in a beautiful white punctuated by spectacular blue patches of sky, and many species of gulls and ducks and other birds.