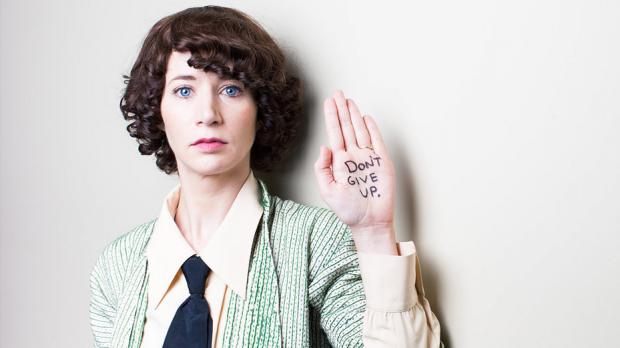 I was, in a word, surprised when I discovered a copy of Miranda July’s debut novel The First Bad Man in my mailbox. I did not request a review copy and if I had, I would not have expected to receive it. The publisher of her last book, It Chooses You, requested that I send them my review once it was published. I did that, and either they did not read it or they read what I wrote and somehow decided that it would still help their cause if I were to review this new novel.

Initially, I did not consider reviewing it at all. I felt too biased, too loaded with mostly negative opinions about the rest of July’s work, which includes a Frank O’Connor International Short Story Award-winning collection, two feature films, two albums, two EPs, two music videos, and an iOS app called Somebody, which enables the user to type a message and have it delivered by hand to the recipient.

July has been decorated with a lot of awards. Many of my friends really like her work. Why couldn’t I? The answer lies in The Future, the 2011 film she wrote, directed, and starred in. It is a fine example of what bothers me about July’s aesthetic and her way of expressing herself, both of which, despite her fearless exploration of new and varied forms of media, tend to stay the same. The trailer begins with a voiceover from a cat named Paw-Paw, whose croaky murmur narrates both his desire to be adopted and the failure of the relationship between the two main characters. Paw-Paw is analogous to Kubelko Bondy, the disembodied voice of a baby with whom Cheryl Glickman, the protagonist of The First Bad Man, converses throughout the novel. The Future features several of July’s other well-worn tools, including the performance of artistic frustration, stilted dialogue, doe-eyed white people, and solitary impressionist dance.

I decided to review The First Bad Man based on the press it has received so far, which has vacillated between general approval and glowing praise: The AV Club proclaimed it the “first great novel of 2015.” (It was published on January 13, so it can’t have had too many competitors for that title.) The New York Times published two reviews five days apart. The first, by Michiko Kakutani, is measured and astute. The second, by Lauren Groff, applauds July ebulliently and criticizes the condescending tone of critics of her work. As one of those critics, and as someone who does not particularly enjoy writing mean things about other writers, I thought I should read the novel and try to appreciate it without thinking of, say, the shirt dance scene in The Future.

The First Bad Man is an unpleasant surprise. Cheryl, whose voice forms the text, is a 40-something manager at Open Palm, a company that initially produced self-defense videos for women but which has become more of a Tae Bo studio. She nurses an obsession with Phillip Bettelheim, a man on Open Palm’s board of directors who is twenty years Cheryl’s senior. She is afflicted with what she calls, in the language of the 1940s, globus hystericus, a feeling of having a lump in her throat that makes swallowing painful. She also cannot cry. She lives a lonely life, replete with all of the depressing little details that we might expect. She has her “system”:

It doesn’t have a name—I just call it my system. Let’s say a person is down in the dumps, or maybe just lazy, and they stop doing the dishes. Soon the dishes are piled sky-high and it seems impossible to even clean a fork. So the person starts eating with dirty forks out of dirty dishes and this makes the person feel like a homeless person. So they stop bathing. Which makes it hard to leave the house. The person begins to throw trash anywhere and pee in cups because they’re closer to the bed. We’ve all been this person, so there is no place for judgment, but the solution is simple:

We’ll come back to the “pee in cups” thing in a little bit. For now, let that paragraph stand for the structured, rigid life that Cheryl has led for years, a routine that she uses to stave off lonesome desperation. “At its best, my system gives me a smoother living experience. My days become dreamlike, no edges anywhere, none of the snags and snafus that life is so famous for. After days and days alone it gets silky to the point where I can’t even feel myself anymore, it’s as if I don’t exist.” July smashes the ball off of this clunky tee with Clee, the daughter of the couple who owns Open Palm, who moves in with Cheryl and who is “so much a woman that for a moment I wasn’t sure what I was.” Lest we draw our own conclusions about Clee’s effect on Cheryl’s life, July directs our attention: “As I walked to the door the map of the world detached from the wall and slid noisily to the floor. Not necessarily an indicator of anything.”

So, of course, Clee disrupts nearly every aspect of Cheryl’s sad, manicured existence. In an interesting turn of events, however, their relationship quickly becomes physically abusive. Clee pushes her around, pins her against walls, and generally dominates her with pain. This disturbing new trend, combined with the disgusting spectacle of Clee’s body, forces Cheryl to retreat into her room. Clee’s feet smell terribly, her underwear has stains on it, and she lives like an animal. “So I peed in cups and knocked over one of the cups and didn’t clean it up. I chewed bread into a puree, moistening it with sips of water until I could slurp it down as a horse would. Only liquids could slip past the globus, and only with a swallowing scenario.” It rapidly becomes clear that July has a special interest in the grotesque, both as a counterpoint to Cheryl’s sterile life and as an aesthetic object. Cheryl is both intrigued and repulsed by the body: “Her nylon sleeping bag released a puff of body odor when I sat down. I was careful not to move the old food wrappers or the hairbrush clotted with blond hair or the bulging pink vinyl bag with colorful thong-style underwear spilling out of it. I lowered my head onto her pillow. The scalp smell was so intense that I held my breath for a moment, not knowing if I could handle it. I handled it.”

The novel is nauseating. I began to wonder if I was like Strephon in Swift’s “The Lady’s Dressing Room”: “Thus finishing his grand survey, / Disgusted Strephon stole away / Repeating in his amorous fits, / Oh! Celia, Celia, Celia shits!” But July seems to bask in the joy of being yucky. It is not as if Clee is the only gross character; Cheryl’s therapist, Ruth-Anne, who is one more flat iteration of the tired stereotype of the terrible, unqualified, inappropriate mental health professional, also urinates in things that are not toilets. Because of some nonsense about the building’s layout, Cheryl has to go to the bathroom in Chinese takeout containers behind a curtain in Ruth-Anne’s office. Later, during a session: “I pointed to the heavy-looking Chinese food cartons lined up on her desk. ‘Is that all from you?’ ‘I drink a lot of water,’ she said, and patted her water bottle. ‘At the end of the day I gather them up and empty them all in the bathroom at once.’ ‘The bathroom here or the bathroom at home?’ ‘The bathroom here!’ she laughed. ‘Can you imagine? Me driving home a million containers of urine and feces? What a mess!’” What a mess, indeed.

July has certainly moved beyond her former embrace of all things whimsical and twee. Groff, in the second review in The New York Times, takes issue with those terms and suggests that the only reason July’s work was ever considered anything less than “wry” and “satirical” is because she is a woman. I think that is an unfounded accusation, especially considering the past year in fiction. In the middle of December I reviewed Peyton Marshall’s Goodhouse and I was struck by the fact that almost all of the fiction I enjoyed last year was written by women. In particular, Diane Cook’s masterful Man V. Nature was a collection of surreal, disturbing, funny stories that I would never in a million years call “whimsical” or “twee.” July’s work is different. She enjoys talking cats, ham-fisted symbolism, and the frustrating, quirky non sequitur. On the fifth page of The First Bad Man: “‘The doctor’s in this office only three times a year.’ I glanced around the waiting area. ‘Who will water this plant?’”

Despite the visceral repugnance of most of the novel’s first two-thirds, including troubling suggestions about the romantic potential of physical abuse in domestic relationships and far too many pages about masturbation that use the words “cream,” “puss,” and “pucker,” July rewards the intrepid reader with a devastating, powerful portrait of two women in love. I was stunned. It moved me almost to tears several times. If July could move past everything else, all of the zany weirdness that amounts in the end to very little, she could really write a moving novel. When I finished reading The First Bad Man, I wanted to give it to my friends, to recommend that people go out and buy it, but then I remembered the first 180 pages. Cheryl, in a sickening discussion of pregnancy, comments on this unwittingly: “Because sometimes it just never comes together—you think there’s a baby in there but it’s just unconnected bits and when you push it all comes out like chicken rice soup.”