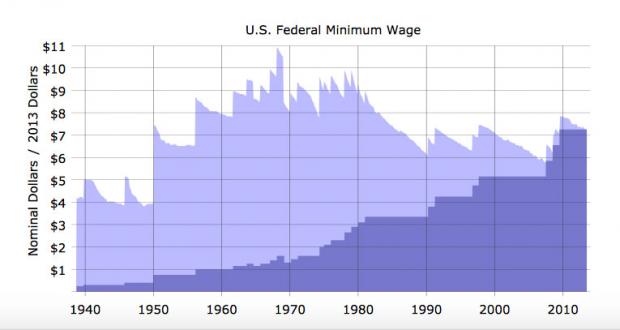 The 2,000-member Buffalo-Niagara Partnership went on record in 2012 opposing this raise, even though the 500,000 national Women’s Chamber of Commerce supported President Obama’s call for a higher national minimum wage. Labor, progressive activists, and most economists endorse the sound economic logic of putting more money into the pockets of consumers who will spend all their income locally. For skeptics or just agnostics, taking a look at the numbers is the best way to cut through the tired, partisan messaging that raising the minimum wage hurts more than helps.

Go to the Living Wage website, where the folks at MIT have calculated what it costs to live in Buffalo and other US metros. The new $8.75 an hour minimum wage works out to be okay for a single adult whose rent is $600 a month, who will spend $250 on food and $250 on the ride to work and back, and who—thanks to Obamacare—can probably get a basic health insurance package for $1,200 a year. The full-time minimum-wage worker will take home $17,500 this year, and if he or she takes advantage of the Earned Income Tax Credit by filing a tax return, then that worker will get to keep pretty much all of it. Making $8.75 an hour will get you enough to cover the basics, unless you happen to also have a couple of hundred bucks a month in student loans to pay.

That $17,500 doesn’t do much for a single parent. The cost of food, transportation, and healthcare jumps smartly with children in the house—one has to clothe the little creatures, too—and then there’s daycare. MIT calculates that daycare for two kids in Buffalo costs about $1,500 per month. That would be roughly $500 more than the gross income of a person earning the new $8.75 minimum wage. In 2010, at the height of the Great Recession, then-County Executive Chris Collins amplified the region’s economic distress by closing two inner-city daycare centers that provided low-cost services to working women. The local business community, adamant about keeping wages low, was silent on this anti-family, anti-worker, pro-unemployment policy initiative.

Luckily for low-wage workers and for the broader economy as well, Albany officials ignored them. The economics profession, so tarnished by the multiple cases of intellectual prostitution that have been exposed since the 2008 crash, had mainly endorsed the policy.

Here’s why it’s important to parse the issue again: In the Obama recovery, there are more jobs, but in the Buffalo-Niagara Falls metro, in New York State, and nationally, many of the new jobs pay less than the jobs we lost during the Great Recession.

In other words, the Buffalo-Niagara Falls metro replaced high-paying jobs with minimum-wage jobs. So not only is it a good thing that Governor Cuomo, Speaker Sheldon Silver, and the rest of the Democrats in Albany raised the minimum wage, because most of the new, post-Great Recession jobs in Buffalo-Niagara and across New York State pay minimum wage. It’s also a good thing that there’s a campaign to raise the minimum wage even higher.

About a quarter of all workers in the Buffalo-Niagara Falls metro can fit the description of low-wage workers. The pattern will probably continue, if not grow: A 2010 study by the Buffalo office of the New York State Department of Labor shows that the greatest number of job openings are for cashiers and retail salespersons, waiters, janitors, teacher assistants, food-prep workers, office clerks, and registered nurses. Only registered nurses make above the $15 an hour threshold that is now becoming a national rallying cry.

Here, the Coalition for Economic Justice is campaigning for what the Seattle metro has—a $15-an-hour minimum wage, which translates to a base annual salary of $30,000 for a full-time worker. In December, CEJ helped organize a strike among some of what it estimates to be about 14,000 fast-food workers. The group will focus on the fast-food sector because it’s so visible, and because most of the big international chains are highly profitable. It’s weird that a local business-lobbying group would defend low wages at McDonalds, Burger King/Tim Hortons, Denny’s, et alia, when those brands export local dollars that would recirculate in the regional economy were our burgers and cro-nuts served by locally owned hashouses.

But it’s bigger than food. Currently, folks making less than $15 an hour include just about everybody who prepares food, cleans buildings, cuts hair, stocks shelves, protects kids at crossings, watches kids while parents work, and even those who work in the category we hear so much about, namely, production, meaning manufacturing. Getting those workers up to $8.75 an hour this year, and $9 an hour in 2016, means progress—but still poverty-level wages.

Bucking the trend is going to be hard. Globalization does what it does, relentlessly: High-wage jobs are for the highly skilled, and high-wage jobs are suffering. Returns to capital are not: As we’ve shown in this column, the federal income tax data show that a tiny sliver of households in Western New York have enjoyed very high returns on invested capital since the Obama recovery began. But there’s been an erosion of the steady, good-wage, good-benefits in the public sector, jobs that never amounted to more than about 16 percent of total employment, but that create a stable base. The hope is that the Buffalo Billion will bring in high-wage workers to make solar panels at Riverbend, and to create marketable drugs, therapies, or processes at the Medical Campus, and bring more income into the economy.

But let’s face it. We have a front-row seat on the change from a broadly-shared, pro-middle-class economic structure to an increasingly polarized setup. The prosperous households around here, which we can generously define as those that are at or above the median income level of about $50,000 in annual income, amount to about 22 percent of total households. Everybody else—the slightly more than 77 percent that bring in less than $50,000 a year—have a shrinking share of total income.

Stabilizing the number of high-paying jobs here is a good economic-development goal, especially because those jobs will bring in dollars from outside the region—and not just tax dollars shipped up to Buffalo from Manhattan via state government in Albany. But stabilizing the economic base of the region means putting more money into the hands of people whose wages are so low that they can’t afford to keep households together.

Do the numbers. The new minimum wage, at $8.75 an hour, or $17,500 a year, keeps a single person working full-time above the federal poverty level of $11,670. Bravo! But the federal definition of poverty for a three-person household (a single parent and two kids) is $19,790. A sensible living wage, as defined by MIT based on the same market-basket approach the federal agencies use, is over $18,000 for a single person, and more than twice that amount for a single parent with two kids, largely because of the cost of childcare.

But let us be hopeful. Niagara University’s Eddie Friel, the ebullient Irishman who was made an officer of the Order of the British Empire for creating a tourism boom in post-industrial Glasgow, dismissed critics who complained about low-wage hospitality industry jobs. New jobs, even entry-level jobs, he said, were good news. Tourism and retail put people to work where there’d been no work. Young people could at least get a start.

Globalization had wrecked Glasgow’s shipbuilding as sure as it had wrecked Buffalo’s steel. Scotland, about the same population as Upstate New York at around 6 million, remains a net recipient of the UK’s public spending, just as Upstate is remains a dependency of Manhattan, via Albany. The question for Scotland, as for Upstate, remains the same: how to handle globalization. Helping change low-wage work into living-wage work sounds like part of a sound strategy.

Bruce Fisher is visiting professor of economics at Buffalo State College, where he directs the Center of Economic and Policy Studies.