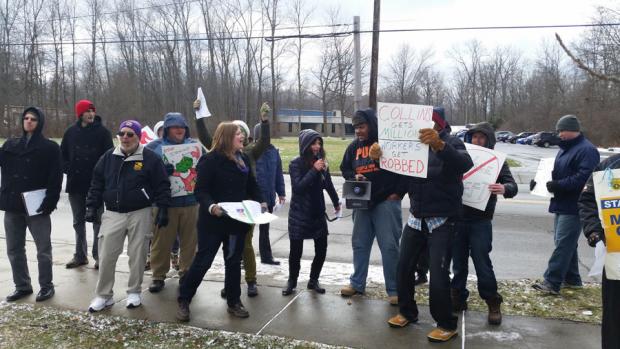 For the past year the WNYALF, AFL-CIO and the WNY Worker Center (a project of WNYCOSH) have combined with other organizations to pursue the fight for improved living standards and working conditions. The reduction of poverty and the improvement of the living standards of tens of millions of ordinary Americans are dependent on winning real battles over income. This is being addressed in a number of ways, including the fight for a $15-per-hour minimum wage, support for legislation that increases the statutory minimum wage, support for executive orders that mandate living wage levels on government projects, defense of prevailing wage work, and last but not least support for workplace struggles that win increased wages at the bargaining table.

While these initiatives are very important, they are not the only issue in this struggle. It is in this context that the question of wage theft must be addressed. Wage theft is about thievery, plain and simple. A worker earns a living by working a certain number of hours at a certain rate of pay. If the employer does not pay for each and every hour, that employer is stealing the worker’s money. This is the basis of wage theft.

A groundbreaking study by the US Department of Labor has shown just how epidemic wage theft has become among low-income workers in New York and California. In these states, between 3.5 and 6.5 percent of all workers are paid below the minimum wage — more than 300,000 workers in New York alone. These findings resonated with an Economic Policy Institute three-city study in Los Angeles, Chicago, and New York City that revealed the average yearly loss of a worker was $2,634 out of a total annual income of $17,616, or 15% of a worker’s wages.

Yet this is not simply a problem for those at the bottom of the income scale. It is an indication of stagnant wages and the disparity of income at higher income levels, as well. The WNY Worker Center has recently taken up a fight assisting a welder and metal fabricator- traditionally a middle income career- whose wages were impacted by wage theft. His employer, Audubon Machinery withheld over $7,000 in earned wages, travel pay, expenses, and prevailing wage additions. The company conceded owing the worker’s wages and a meeting to discuss a settlement after a mass demonstration outside the plant on December 20th.

This is a significant example of the problem of wage theft. It also points out that real struggle over such questions can be victorious. A simple phone call or letter demanding the amount from the employer can often recoup stolen wages. The WNYALF AFL-CIO and the WNY Worker’s Center have a joint interest in addressing the income problem in our society. We will continue to work together to find the means and the methods to improve the living standards and conditions for the American working people.