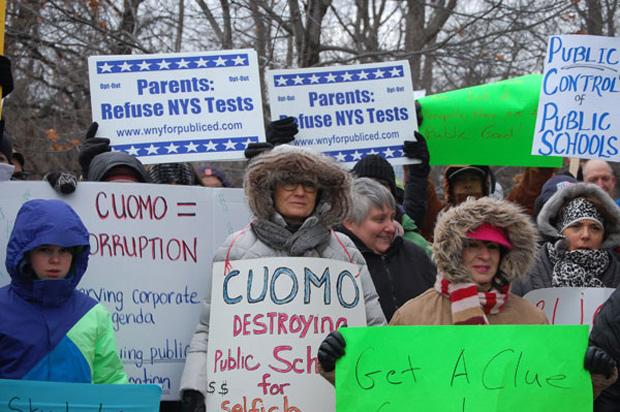 Governor Andrew Cuomo rang in the New Year with his inauguration event at the Buffalo History Museum. Inside, an invitation-only crowd of boosters celebrated the onset of his second term. Outside, a mass of protestors voiced their opposition to his education agenda.

Had they been allowed inside, the ceremony of self-congratulation may have taken on a more serious character. The protesters would have certainly found much ground for disagreement. Indeed, had they been let inside, the pro forma pomp may have been replaced with a politically meaningful debate.

Cuomo used his inaugural speech to take aim at teachers: “Albany has been too concerned with protecting the pension rights of teachers,” he said—a statement that came days after Cuomo vetoed his own bill which would have blunted the impact of the reviled Annual Performance Professional Review [APPR]. The governor isn’t pleased with the low percentage of teachers rated “ineffective,” and so he wants to rig the evaluation process to bring up the rate. Finally, Cuomo is considering a plan to remove power from Buffalo’s School Board and hand over control to an education czar. He’s got the support of two influential board members—Carl Paladino and James Sampson—who, oddly enough, seem enthusiastic about the opportunity to have their board duties stripped from them.

The assembly outside the museum—a group that included parents, students, and teachers—are familiar with the Cuomo education agenda, and they are opposed to nearly every aspect of it.

The debate, they argue, must be shifted from blaming teachers for underperforming schools and center instead on the conditions in which education takes place. Their principle focus: getting rid of the Gap Elimination Adjustment [GEA], a legislative tool responsible for cutting funding to school districts since the recession of 2008. Because a budget surplus has been projected for New York State thanks to unexpected bank settlements, there is the possibility for restoring funding for education. But is there political will?

“I think it’s time for [Cuomo]—with the $5 billion surplus—to give that money back to the students of New York State,” protester and Kenmore resident Kevin Gibson said. “He claims that he’s the students’ governor. Then he should put his money where his mouth is.”

Another activist, Chris Cerrone, a Hamburg teacher and Springville School Board member, said that the effects of the GEA in Springville have been pronounced. The situation has had a deleterious effect on the schools’ capacity for producing positive educational outcomes.

“We’ve been shorted over the last four years $14 million, which means that class sizes have exploded. They’ve cut staff, we’re cutting programs such as AP and specialty courses. And if the GEA is not restored in this coming budget season, schools across New York are facing devastating decisions.”

Cerrone was worried that, should the governor restore funding to schools (by no means a certainty), the restoration may come at a high cost.

“Cuomo keeps saying that the schools have enough money. I think what he’s going to do is that he has this new plan for teacher evaluations—to knock it up to 40 percent.”

Cerrone was referring to a recent letter sent to Cuomo by Board of Regents Chancellor Merryl Tisch, who has made her plans for the teacher evaluations clear. Currently, 20 percent of a teacher’s effectivity rating is “based on student growth on state asessments,” 20 percent is “based on locally selected measures of student achievement established through local collective bargaining,” and 60 percent is based on “measures of teacher/principal effectiveness established through local collective bargaining, including observations and surveys.”

Tisch’s recommendation is to dump the 20 percent determined locally, double the state portion to 40 percent, and to give control of the scoring ranges in the observation component to the state.

Her contention is essentially that the state is a better judge of teacher performance than the school administrators who interact with teachers and their students every day. Carol Burris, principal at South Side High School in New York, writes for the Washington Post that the “Tisch plan is a power grab designed to snatch away the right of elected Boards of Education to determine quality teaching, by shifting it to a formula produced in Albany based on flawed tests.”

Cerrone speculated that Cuomo is looking to implement Tisch’s recommendations by using the restoration of GEA funds to do so. The old carrot and stick routine.

“I think he’s going to tell the districts, ‘If you go to this, then we’ll give you some money,’ because that’s how they did with the first round of evaluations. He blackmailed all the districts and said, ‘If you don’t get this approved with your local union, you’re not going to get a certain amount of money.’”

Parents and teachers who feel marginalized by the state’s bully tactics have united in the opt-out movement. The state continues to amass power over curriculum via the Common Core standards—in the process tying it to teacher evaluations—and the simple yet effective response has been to neuter the tests by refusing to take them.

In one stunning example, 90 percent of parents from Castle Bridge Elementary in New York City forced their school to nix the tests, because results from such a small sample of the student body would be useless.

Cerrone noted that last spring more than 60,000 parents refused to let their kids take the tests.

“I was one of the first people to publicly opt out their children in Upstate New York, and we had probably about 100 people three years ago. Two years ago we had maybe about 5,000, then we went up to 65,000 last year, so the movement has just grown by leaps and bounds as parents start to see the harm of high-stakes testing.”

This spring he and parents around the state will be pushing for an even higher number. So, why is the governor, in his second term, pushing an agenda for which there is such public antipathy?

Green Party leader Howie Hawkins, who ran against Cuomo last year, says it’s simple: Cuomo is beholden to interests which stand to gain by the dismantling of the public school system and its replacement by for-profit, private charter schools.

“After after Cuomo got re-elected [the financial press] said ‘start investing in charter school companies [and] in the real estate companies that suck the money out of there by financing the construction of charter schools and charging rents that are too high…Jim Cramer on CNBC—he’s touting education privatization, [saying] that the market’s going to be up.”

“We’ve got $54 million of documented fraud by the charters in New York. People are beginning to find out that they might be nonprofit shells, but then they hire a for-profit management company and suck all the money out. And people are going to see this as theft. They’re going to get wise to it.”

Alden resident Don Hey—who was at the rally with a contingent protesting the SAFE Act and advocating for Second Amendment rights—claimed that Cuomo’s disdain for popular will has no bounds. Thus, he was bullish on the prospects for a populist coalition to thwart the governor. Pointing to the Buffalo History Museum, he said, “The teachers’ association and the Second Amendment supporters, we have a mutual problem: He’s in that building; his name is Andrew Cuomo, and he does not respect the rights of New Yorkers.”

“[H]e has law enforcement against him,” claimed Hey. “If you talk to the troopers, if you speak with the sheriff’s department, and the local police departments as well, you’ll find very, very few people in those groups believe that the New York SAFE Act is going to save lives.”

Teachers, administrators, and parents od students in public schools seem to feel the same way about Cuomo’s education policy. Why did he use his inauguration speech to take a shot at pensions? Why is he so intent on weakening teacher job protections with APPR? Why is he promoting policies to increase state control at the expense of district control?Why is the Buffalo School Board Majority so eager to recuse themselves from the duties voters elected them to perform?

At some point, said Kevin Gibson, Cuomo will have to confront the public swell of hostility to his style of governance:

“To me it’s clear that the governor’s policies—if you wanted to look at the SAFE Act—it’s very similar to what he’s doing in public education. It’s a heavy-handed type of policy. It’s done essentially without respect for the public, and I think that’s what’s bringing people out. You’re hard pressed to go anywhere else in this country and see so many people going out against their sitting governor. He was only elected by, what, only four percent over 50 percent—he had 54 percent of the vote—so I don’t see him as a popular person.”

Shane Meyer reports on New York State policy and education. A photo essay of the above protest can be found here.