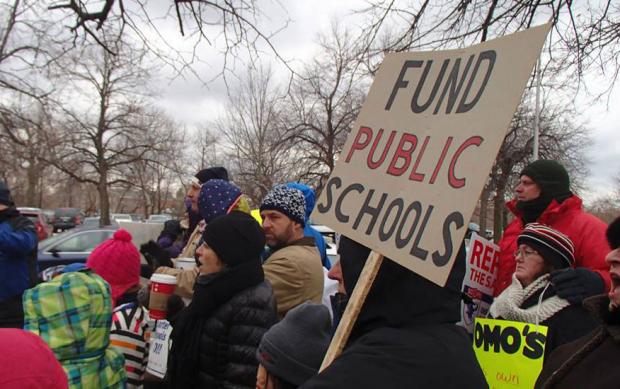 Activists bundled up to brave wind and bracing cold outside Governor Cuomo’s inauguration at the Buffalo History Museum. “Cuomo is not a friend of public education,” was a popular refrain throughout the day from those who believe that the Gov is purposefully defunding public schools to push a privatization agenda.  (Eve Shippens)

Howie Hawkins, the 2014 Green Party gubernatorial candidate, rallied the crowd of parents, teachers and students, while police officers look on. “Hey, hey, ho, ho, Andrew Cuomo has got to go,” shouted Hawkins with the assembled echoing his words. (Eve Shippens)

“Fund Public Schools” was the message protestors sent to Governor Cuomo, who, with a massive budget surplus, has the power to restore the cuts to schools by the Gap Elimination Adjustment [GEA]. “We’ve got a big fight this year,” promised Hawkins. (Eve Shippens)

An unmanned police car maintains order. The crowd was boisterous but amenable, and relations with security remained cordial throughout the hour long rally. (Kevin Gibson)

Many activists are dubious regarding Cuomo’s plans for public schools. “He’s in bed with hedge funders,” said one protestor who opined that Cuomo’s mission is to wrest away local control, and hand it over to private interests. (Kevin Gibson)

Cuomo is pushing to weaken teacher job protections by strengthening the consequences of the Annual Professional Performance Review [APPR]. School administrators and teachers are pushing back, claiming that the Reviews—which, in part, measure a teacher’s performance against the performance of students on Common Core tests—are flawed. “Let’s evaluate Cuomo!” some wry chanters suggested. (Kevin Gibson)

Chris Cerrone, Hamburg teacher and Springville school board member, said that the GEA has resulted in school funding shortfalls, increases in class sizes, losses in staff, and cuts in “programs such as AP and specialty courses.” Despite the situation, “Cuomo keeps saying that schools have enough money.” (Eve Shippens)

It wasn’t only education activists who came out on Thursday afternoon. The man holding the upside down flag, Don Hey, belonged to a contingent of second amendment boosters, who were on hand to make their opposition to the SAFE Act known. Hey called the bill a “political maneuver,” adding, “[Cuomo] has law enforcement against him. If you talk to the troopers, if you speak with the sheriff’s department, and the local police departments as well, you’ll find very few people in those groups believe that the New York Safe Act is going to save lives.” (Eve Shippens)

Education advocates believe that the Common Core tests are the means whereby the governor and Board of Regents hope to disassemble the public school system. They have responded with the growing opt-out movement, in which parents have their kids refuse the tests. (Eve Shippens)

Shane Meyer will post a full report on Thursday’s protest online and an additional report on the BPTO and DPCC in print next week.