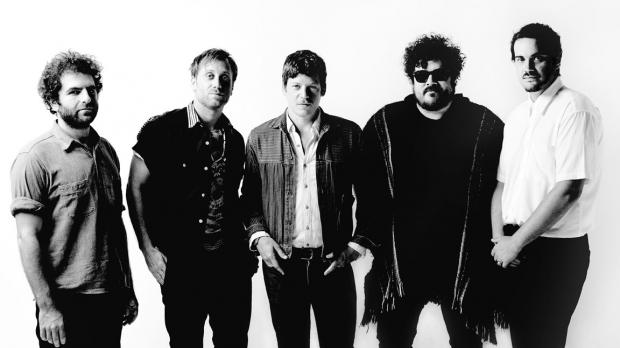 [ROCK] The Dan Auerbach saga continues with The Arcs. The Black Keys frontman recruited Menahan Street Band member Homer Steinweiss, Amy Winehouse collaborator Nick Movshon, Black Keys touring bassist Richard Swift, Leon Michels and guitarist Kenny Vaughan for the collaborative 2015 album, Yours, Dreamily.\ The easy-going, soul-inspired LP vibes like longtime pals jamming ego-free in their basement. This album could easily come off as an “Auerbach & The Arcs” project, but instead it conveys an apparent team effort with all members receiving songwriting credits. A lot of flavors are thrown into the pot, but the result is a brew that’s diverse, yet charming, from the clattering of horses on the dusty country-tinged “Everything You Do (You Do for You)” to the salacious moans and feverish saxophone on “Come & Go.” The blues seeps through by way of Auerbach’s soul-soaked vocals that plead, whisper, and talk-sing in true Motown fashion. While their twangy, psychedelic lead single, “Outta My Mind” could easily play on the Black Keys’ Attack & Release album, overall The Arcs’ packed instrumentalist setup churns out a heavier, more swirling sound than Auerbach’s primary band. Throw in the all-female Mariachi Flor de Tolache—known to take the slow-burners like “Put A Flower In Your Pocket” to haunting heights—and you’ve got an epic live show. Catch The Arcs with Mariachi Flor de Tolache at Canalside on Thursday, July 21. Public Choice battle of the bands winners The Tim Britt Band will open the show.