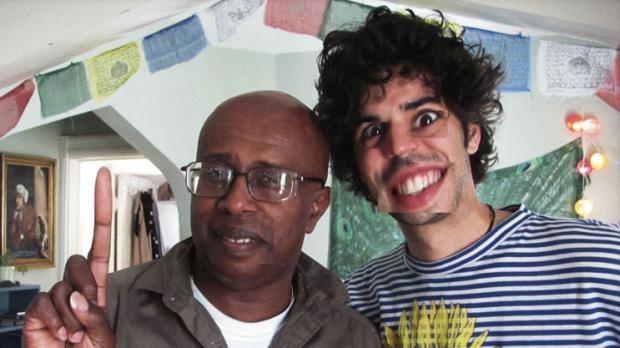 [PSYCHEDELIC] David Liebe Hart is an unbounded embodiment of the quintessential creator. As the chameleonic master of many hats, he has built a handsome career bridging the gap between puppet and preacher, father and friend. Soaring ever onward upward through the fields of spacetime earth, inebriated only by toxic levels of utmost genuineness, David has threaded every needle in his path and amassed a following of wonderfully devoted, clown-worshipping smartphone owners. He is the celebrated North Star and shaman of blatant inspiration guiding 21st Century comedy legend duo Tim and Eric into their own higher chakras of continuing fame. His skills as song writer, actor, comedian and puppeteer have swollen the hearts of countless free thinkers and established constellated neural pathways otherwise reserved for near death experiences and the massive consumption of DMT. Without him, this planet would surely shrivel up and die without so much as an ember flickering exhalation to softly cool the open wound.

So why on earth can’t this man find a loving woman to share his life with? Those who know him may contest that David Liebe Hart’s stipulations for an ideal candidate are too rigid; that he is playing the part of a Picky Peter, but as far as limiting search modifiers go they seem reasonable enough:

“I want an attractive, slender woman. I want a woman that is honest and that doesn’t lie, because I got stood up on my birthday… I’m tired of meeting liars and flakes. I want to meet a woman who is solid and sincere.”

David communicates in the delineated manner of a person possessing a trifold consciousness. There is the David who is speaking the language of honest immediacy—the fluidity of an utmost sincerity that stems naturally from the heart. There is also a cunning artist present during our conversation; a force which employs deeply nuanced comedic algebra and the devices of taste and timbre in order to illuminate the spirit and whet the appetite for joy and mental stimulation.

The third and penultimate parameter which David discreetly displays is a precise filtering mechanism of higher influences. Behind his soft glowing eyes exists a mind whose memory recall function fires like a calculated gunsmoker whose aptitude for repairing loose ends has rendered him useless on the battlefield, but a legend of kumbaya and cat’s cradle. He is a master conduit of broad ranging historical references and personal recollections connecting anecdotal humor with philosophical enlightenment and drawing on the concentrated wisdom of generations of higher religions, extra-terrestrial communication, and scholarly research.

As truly remarkable as he is, it’s hard to understand why David Liebe Hart has been met with more flagrant disrespect and animosity than a common mule.

“I had a horrible thing happen to me at the ASCAP membership meeting. ASCAP is a union that songwriters belong to. On April the 28th three Hispanic guys jumped me and roughened me up and my legs were all swollen up. They wouldn’t give me a chance to pull out my ASCAP card, or my identification. It was terrible. Paul Williams is the president of the organization and he didn’t even call and apologize to me or look into the matter, and neither did Elizabeth Matthews who is the vice president. They didn’t even care.”

When I asked him about life on the road, his answer was equally troubling.

“I got stood up in New York by a band. They were supposed to drive me to the train museum and they didn’t do it. Then I tried to travel on the subway but instead of going to the museum I wanted to go to, I went to the museum that had a setup of model trains and films about the old New York subway. I wanted to ride the old New York subway cars at the other museum. So I went to the wrong museum and I got lost going to the wrong one.”

Although David has deep roots in Western New York, and despite everything he has accomplished both personally and professionally, members of his own family refuse to support him.

“My family were from Buffalo, New York. They did a lot of work with Harriet Tubman and Frederick Douglass and the Quakers with the underground railroad. I had family there a long time ago but they never come to support my shows.”

Whether anything can yet be done to right these foul wrongs, and whether or not it is possible to correct the faulty thinking of hateful and ignorant individuals hell-bent on trampling genius underfoot like the ashes of a stolen cigarette, those of us left with any scraps of a seventh sense ought to clear our schedules, pursue cosmic justice and make room in our hearts for a warm communal embrace of the most rare and precious David ever to compose religious music. Welcome again to Buffalo, David! May you find true love and the dawning of a new era marked by equal parts respect and fantastic inexpensive food! David Liebe Hart comes to Mohawk Place on Thursday, June 2. Opening ceremonies will be performed by some of his most faithful devotes, Wood Bois, Chris Gullo, and David Liebe Hart Tribute Band.