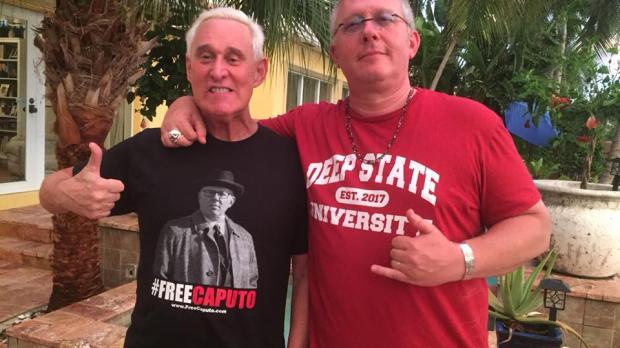 Roger Stone and East Aurora resident Michael Caputo, who is featured in the film.

Get Me Roger Stone: Screening and Director Interview

[NEWS] Earlier this month on the day Roger Stone was arrested and subsequently released on bond, he appeared before a throng of demonstrators chanting “Lock him up!” He defiantly raised two fingers at the end out outstretched arms—the Richard Nixon salute—and by all outside appearances, appeared to be having one of the best days of his life. He appeared also appeared on numerous TV and radio talk shows. Stone’s reaction was a shocking moment for those who had not yet seen the award-winning Netflix documentary Get Me Roger Stone. Stone has built a legacy of translating negative attention into power and influence in a way that really kind of reveals the fissures and failures of our political industrial complex. On Tuesday one of the directors of the film and former editor at Ctiy & State Morgan Pehme will appear at the Burchfield Penney Art Center to screen the film and take questions from Investigative Post’s Jim Heaney.