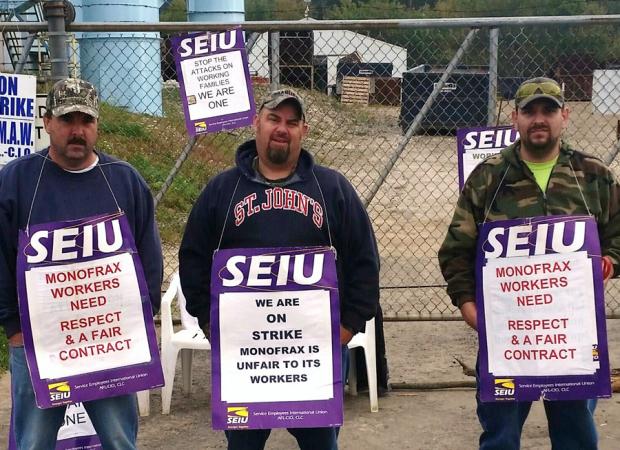 The current labor dispute at the RHI Monofrax plant in Falconer, NY is rich with lessons for the labor movement and its allies. This strike began on 9/29/14. The SEIU Firemen and Oilers District Chapter #266 and the International Association of Machinists #2105 are fighting RHI Monofrax over several key provisions of their collective bargaining agreement.

RHI Monofrax, an Austrian based company, is demanding serious concessions on health care, pension, retiree contributions to health care, progressive discipline, and seniority rights. The total cost of these concessions is over $1 million dollars, and it would all come from the bargaining unit. Over 150 workers would be affected.

It is ironic that a company based in Austria is seeking such dramatic changes. Labor regulations in Austria largely precludes the stripping of basic labor rights by the employer. The strike is now in its 11th week, and while the workers are holding very strong, no one can say with any certainty what the outcome will be.

There have been three major strikes in our region in the past 18 months. The first of these is Teamsters #449 and Rural Metro. This strike was over the issue of the living wage. Emergency Medical Technicians, who are employed to provide life-saving assistance to those who need it, were being paid at a starting rate of less than $10.00 an hour. The strike lasted 8 hours and the living wage was settled to the benefit of the bargaining unit.

The second was the International Association of Machinists and the Calspan Corporation this past summer. This turned into a bitter affair lasting much of June and July. The issue in this case was over working conditions, especially hours of work and work-week guarantees. In this event, the entire WNY labor movement rallied to the side of the striking bargaining unit. Much of the WNY political leadership also supported the workers. Further, issues related to subsidies given Calspan by various government agencies were a factor. After 10 weeks the strike was settled and bargaining unit has survived.

These three examples are rich with significance. In the private sector, a strike by its very nature is a clash between labor and private capital over issues relating to the employment relationship. There is nothing surprising or even unusual about this clash, except that it doesn’t happen more often. Our economic system–as the right wing demagogues are fond of pointing out–privileges a maximum return for money invested by the employer. It is a system based on the least amount of governmental regulation in the entire industrial world. This means without the intervention of the labor unions, there is almost no interference in the making of maximum profit. This is not a moral or ethical question; it is purely based on power relations and who has the upper hand.

Strikes are the outward manifestation of the contradiction between a group of workers organized into a union who pursue wages and benefits and the employer who seeks maximum profit.

The examples of RHI Monofrax, Rural Metro and Calspan bear this out. A strike, if well prepared and executed, can result in worthwhile outcomes for the workers and their union organization. However, the converse can also be true for ill-prepared strikes. Preparation must include ironclad unity of the bargaining unit and full support from the labor movement and the friends of the labor movement.

As ever our global economy is in the throes of great change. In the private sector labor unions are organized and exist to curtail unbridled profit taking by private employers. A key tactic in this struggle is the strike. Those who wish to build a society with high road economic standards should find unity with the unions who use strikes to protect and expand the wages and benefits of their members.