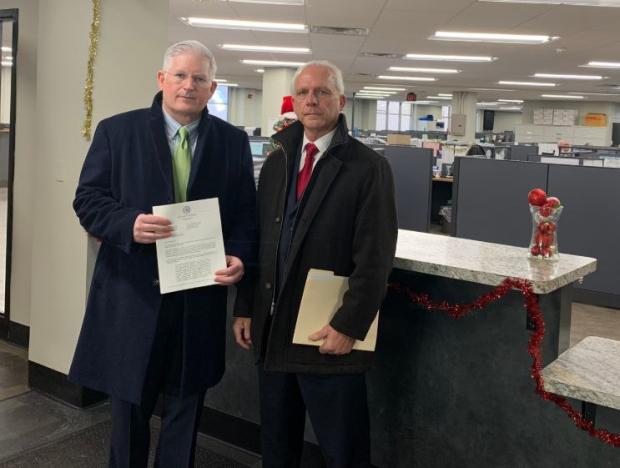 Michael Kearns, the Erie County Clerk, is on a nativist anti-immigrant jihad that is as stupid as he. Check out this article at WGRZ. It begins,

You would think from that lede that notorious convicted liar-under-oath and vote fraudster Rus Thompson was again on the loose. But that’s not what happened at all.

“This is the beginning of questioning of possible fraud,” said Erie County Clerk Mickey Kearns, who wants the county Board of Elections to investigate what happened last week, when a Buffalo man, in the U.S. legally on a work visa, applied for and got a commercial driver’s license.

The “beginning of questionining of possible fraud” is ridiculous fascist word salad from this repulsive elected official.

“By the time my staff alerted me of this, this gentleman has left the office the transaction was completed,” Kearns said, “I do not know whether it was a mistake or not.”

Mickey. I know this is difficult for you to comprehend, but you are a clerk. Your duties are ministerial. It is not your job to vet whether the applicant is qualified to register to vote — you take the information and you pass it along to the Board of Elections, which makes that determination. If the guy entered a fake social security number that does not match his other identifying data, then it will be rejected.

This technically is not a situation related to the Green Light law, which allows people to apply for a standard driver’s license regardless of their citizenship or lawful status.

“They’re asked the question, ‘Are you a citizen or not?’ If they answer yes, there is nothing right now that our staff can do,” Kearns said.

Because getting a license is dependent on paying a fee and passing a test. Registering to vote is dependent on the Board of Elections vetting the information. Mickey Kearns’ penchant for being a nativist, racist liar is not nearly as effective as Stefan Mychajliw’s, but at least he’s getting his name in the paper and really showing the Republican base that he genuinely hates immigrants, regardless of their visa status. Because, as the WGRZ report lays out, this has nothing to do with Kearns’ opposition to the Green Light Law, as this applicant could have applied for a license at literally any time prior to December 2019, and it is likely that people mistakenly complete the whole form, including the voter registration part, unwittingly and with no effect.

Mickey Kearns is using this to concern-troll and virtue-signal over the Green Light Law, which has absolutely nothing whatsoever to do with it. Maybe in the future if someone fills out a Motor Voter application in-house, your staff can check their ID.