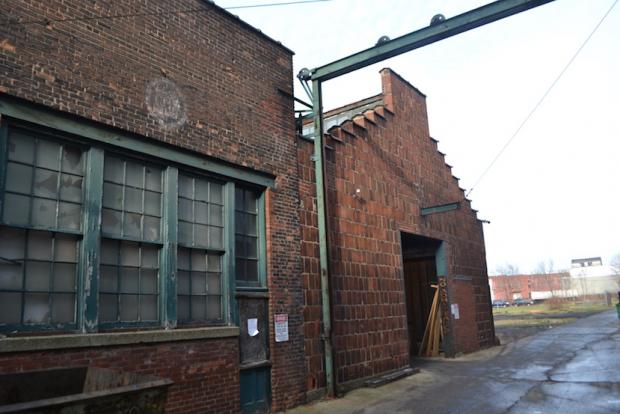 On Tuesday morning, workers from Empire Dismantlement began to remove the roof of a building on the north end of the Crosby Company’s complex on Pratt Street, between William and Broadway.

In November, the company applied for a demolition permit for five structures in the complex, “due to deterioration and collapse of structural walls and roofs.” Last Thursday, December 17 the Buffalo Preservation Board denied the company’s request for approval and agreed to seek landmark status for the complex. The application for landmark status will be reviewed at the Preservation Board’s January 7 meeting. Nonetheless, the company removed the roof of building #20 on December 22. A source in the city’s Department of Permits & Inspections could not locate a permit for that work and did not believe one had been issued.

Empire Dismantlement has had heavy equipment staged at the north end of the complex for several weeks.

The Crosby Company and its facilities are certainly historic: Founded in 1896 by William H. Crosby and William H. Hill, the Crosby Company initially manufactured bicycle frames and parts, and later parts for automobiles. (An advertisement for the country’s first automobile show, in Chicago in 1901, declared, ““Crosby metal stampings are playing an important part in the development of the automobile.”) Over the decades the clientele for its metal-stamping operations continued to diversify; in 1947 the company had 450 employees and produced, for example, 500,000 bathroom scales per year. The company continues operations, mostly using the buildings at the toward the William Street end of the complex.

The founder’s name is memorialized on the side of the William Street building, but also in Crosby Hall (dedicated in 1932) at the South Campus of UB, where he was a trustee and to which he was a significant donor, and in the Crosby Building (built in 1916, currently owned by Ellicott Development) at the corner of Franklin and Mohawk downtown.

The buildings appear to have significant roof issues, and likely asbestos problems, but otherwise to be salveagable. There is a rumor, unconfirmed, that the Crosby Company is now willing to consider purchase offers for the structures. The buildings the company seeks to demolish are #1, #2, #10, #14 and 20: