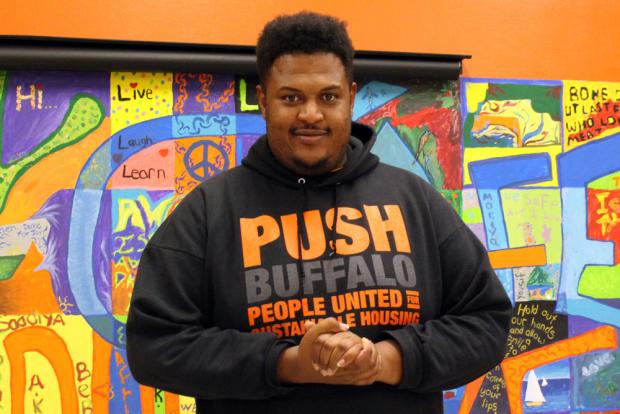 Social activist, fighter against injustices, and community leader are just a few ways to describe PUSH (People United for Sustainable Housing) Buffalo’s lead campaign organizer, John Washington. His immense passion to promote education and awareness, and to fight against social inequity is deeply embedded in his lifestyle. He even named his son after his endeavors: Justice.

“I thought of all the people I would want to name him after. I thought, what brings this all together? Everyone I wanted to name him after was working for justice. One day it just clicked.”

You might say Washington was bound to follow the path he’s taken, being the son of an African-American mother who grew up in 1950s-1960s Harlem and was part of the first wave of children to experience desegregation in public schools. Through his mother, Washington was exposed to human rights activists such as Malcolm X and Muhammad Ali, and he read black liberation literature as a child. Even after he left college, Washington says he read just as much, if not more, than he would have read in college, and remained dedicated to education through self-study.

Washington says it wasn’t until 2011, around the time the Occupy Buffalo movement began, that he became an activist. Occupy instilled in him a sense of obligation to change the dynamics he witnessed while working as a debt collector. (“Buffalo is the collection capital of the world,” Washington says.) His journey began with a deep distaste for banks and war to fighting for racial equality and against corporate takeover of education.

And so Washington evolved from a college dropout working as a debt collector to one of Buffalo’s freedom fighters.

The Occupy movement also changed the way Washington viewed leadership and community activism. Before he witnessed the peaceful protests and demonstrations in Niagara Square, he linked leadership to managing followers, as opposed to the process of creating other leaders.

If you ask Washington what his overarching goal is, he will proudly tell you it is community control of resources, economic development, education, and awareness. “Most people are conditioned to think you can’t fight city hall. I think community engagement is what you need to teach people otherwise.”

So what’s the average day in the life of a freedom-fighting workaholic? “Meetings. A lot of meetings, sometimes seven or eight a day, usually with elected officials, leaders of organizations, and general people in the community. If I’m not in a meeting, I’m canvasing, getting to know people and their problems and how my work fits as a solution. There are also organizational days and action days, where I’m at a rally or a march, or planning a rally or a march.”

He admits that it can be difficult to create community engagement; it takes effort to encourage others to get involved. I asked Washington if he felt most people were apathetic, and if we’re all too caught up in our own lives to get out there and make a difference. With the constant evolution of technology and human reliance on gadgets and the digital world, some of these meetings where pressing issues are discussed seem to suffer from a lack of attendance. Washington, being an optimistic character disagrees:

“The reason is realistically we live in an impoverished and oppressed society. I don’t think people are apathetic; I think people are oppressed, and that they have lost in the face of a system so many times that that’s what they expect. It’s not that they don’t care; in fact they care a lot, and I’m sure that they are furious, and that comes out as passive aggression in all kinds of ways that their family, friends, and coworkers see. The problem is that you are not taught how to change things. You’re not taught how governments work, how structures work, how businesses work, how they relate to each other, and you’re not taught how to change them or how to engage other people around collective problem-solving. Those aren’t things we are socialized to do…you want to find out where their frustrations and oppressions are and develop a sense of self in them that says, ‘I am not what I’ve been oppressed by but I am a powerful person that can fight back against this.’”

In the rare instances where Washington is not working, you’re bound to find him spending time with his son, reading, or listening to his favorite local hip-hop artists, like Quadir Lateef or Mad Dukez. Before his awareness of Buffalo’s community activism, Washington wanted to be a rapper. “I didn’t realize it at the time, but [rappers] were the only people I saw speaking the truth. I read a lot about Malcolm X and Martin Luther King, but I didn’t see a lot of people my age or in my era who were speaking the truth, so hip hop had a huge influence on how I thought about the world. The roots of hip-hop are a combination of situations that happened in Brooklyn and in the Bronx with immigrants, mass gentrification, and poverty. It has revolutionary roots. ”

Washington says he hopes to be a part of a future of more activism and campaign victories that lead to more affordable, sustainable housing, and pushing back against gentrification in Buffalo. Through education and leadership, he firmly believes we can be the most sustainable and racially diverse city in the country.