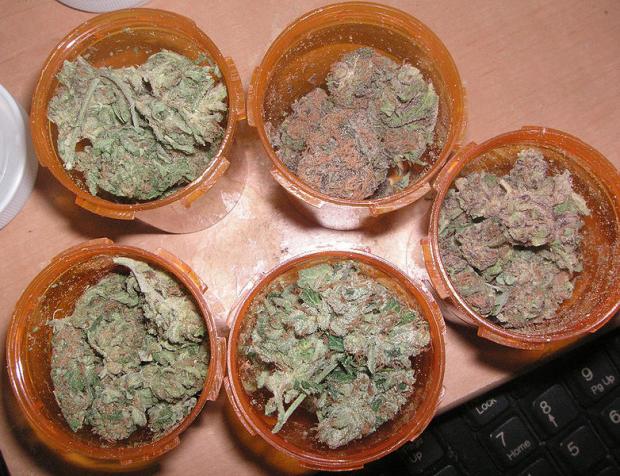 From Wikimedia Commons: Four different strains to help ease pain, insomnia, and lack of hunger due to chemotherapy.
by
Aaron Lowinger
/ Dec. 22, 2014 7am EST

We’re still monitoring the fallout of last week’s momentous decision that signaled the end of the federal prohibition on medical marijuana, a stipulation buried deep in the 1,603 page bipartisan federal spending package, and it seems as if the news has barely stirred a ripple in the pond for the reefer madness set. There are more pressing matters it seems, than blocking people from accessing medicine that can truly alleviate symptoms of horrifying diseases.

But we are wondering this Monday, why New York State was left out of section 538 of the bill? Here’s the paragraph in its entirety:

None of the funds made available in this Act to the Department of Justice may be used, with respect to the States of Alabama, Alaska, Arizona, California, Colorado, Connecticut, Delaware, District of Columbia, Florida, Hawaii, Illinois, Iowa, Kentucky, Maine, Maryland, Massachusetts, Michigan, Minnesota, Mississippi, Missouri, Montana, Nevada, New Hampshire, New Jersey, New Mexico, Oregon, Rhode Island, South Carolina, Tennessee, Utah, Vermont, Washington, and Wisconsin, to prevent such States from implementing their own State laws that authorize the use, distribution, possession, or cultivation of medical marijuana.

So why is New York left off the list? Is it simply because our medical marijuana program still lacks definition? This bears watching. The families of those suffering from ailments that could be relieved by marijuana are wondering exactly what the hold up is.

Meanwhile out west, Colorado continues to be the epicenter for the legalization movement. Instead of government money being spent to investigate the negative effects of marijuana, an $8M research grant was awarded by the Colorado Board of Health to look at whether the plant can truly help with epilepsy, brain tumors, Parkinson’s disease and post-traumatic stress disorder.

With a locally-based economy booming, teen use of cannabis dropping, and crime rates falling, and governments reaping a windfall of tax profits throughout Colorado, neighboring states have finally decided that enough was enough. Nebraska and Oklahoma filed suit last week against Colorado’s progressive weed laws, citing the fact Colorado is letting us down with respect to our treaties with foreign governments: “Through its exclusive Constitutional power to conduct foreign policy, the United States is a party to international treaties and conventions under which it has agreed to control trafficking in drugs and psychotropic substances, such as marijuana.” I guess the legalization of marijuana is a foreign relations nightmare that no one except the state houses of a few landlocked American states know anything about.

If there’s profit to be made by large top-heavy companies by extracting fossil fuels using environmentally destructive methods, the Republicans are all for it, but if folks want a grass roots (literally) and sustainable economic engine based around individual liberty, well you can forget it.

Criminals of the Week

Two teenagers from Gaylesville, Alabama were arrested last week on felony possession of marijuana as they worked off a cruel case of the munchies in a Waffle House. Those scourges on our society, Matthew Vaughn Herrin and Dylan Chase Mitchell, were thankfully taken off the streets, along with their ounce of weed and smoking utensils. And the Danger-o-Meter dropped precipitously in Alabama with the news.

File under parliamentary governmental systems: the editor of a popular marijuana news website in Israel is running for Knesset with a predictable agenda. Oren Leibovitz wrote, “I am thrilled to accept the appointment as chairman of the party that represents the struggle I have been waging for years and I hope to bring hundreds of thousands of Israeli cannabis supporters to the ballot box in the elections.” Leibovitz hopes to accomplish, at the very least, to stop “the hounding of marijuana smokers.”

In Canada, the Conservative government lost its latest appeal aimed at preventing medical marijuana users from growing their own, because you know, what the hell and how dare they and everything. The court passed down an unanimous decision, which prevented medical users from buying their drugs off the streets from young kids who hang out in Waffle Houses, or Tim Hortons, as the case may be.

And the epileptics of Brazil are slowly succeeding in making their own case that some future politicians will sue over, seeking the legalization of medical pot.

Brian Borncamp contributed this thoughtful article to us last week, which imagines a future economy on Buffalo’s East Side featuring good pal cannabis. By all intents and purposes, the marijuana biz is a slow train coming, laden with long-term and localized economic benefits that far outweigh the negative effects, and Borncamp’s piece is a slice of that future.