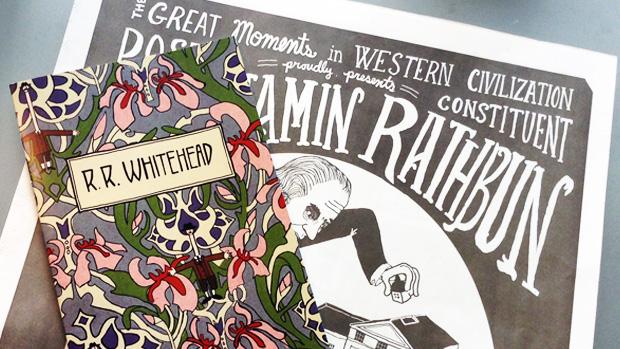 For three days last month, November 11-13, art historian and critic Lori Waxman installed herself at the Burns Building on Huron Street and received local artists seeking a review of their work. Each artist’s appointment lasted 25 minutes and resulted in an instantly rendered, signed review. Thirty artists visited Waxman, who describes her 60 wrd/min art critic project as ”an exploration of short-form art writing, a work of performance art in and of itself, an experiment in role shifting between artist and critic, a democratic gesture, and a circumvention of the art review process.” Last week we published 10 of these; here are eight more. We’ll publish the rest next week.

In Paris in the 1950s, a small group of artists calling themselves the Affichistes made a practice of wandering the city to find their paintings on its walls. When they liked a swatch of torn and layered posters, they sliced it down and rehung it in a gallery. Fast forward many decades later and here is Joyce Hill, laboring not with her feet on the street but her hands in the studio to create heavily worked collages that look and feel a lot like those the Affichistes discovered by hazard. Her work resembles, too, some of the best American experiments of that era: the rough, spare graffiti of Cy Twombly and the rebus-like combines of Robert Rauschenberg. All of these artists have been enamored of the urban environment and the beauty that could be wrought from its accretions both intentionally and not. Not every denizen of the city can see it for the unique aesthetics it contains; then as now, we need artists like Hill to set an example.

Megan Armstrong draws and sculpts lines. That may sound simple but it’s not at all. What’s in a line? The most basic of structural elements, lines trace the alphabet, grow from our heads and skin, divide traffic, raise buildings, ground trees. They appear straightforward but do complicated, life-sustaining and life-controlling work. Armstrong’s lines model such structures less in how they look than how they function. In“  A Reductionistic Anachronism,”   an unfathomable complex of white lines tangles against a black ground in a grid of eighteen meticulously interconnected ink drawings. In “  Resilience, ”  an infinite number of downy dandelion seeds cluster together, their pale fronds accumulating into an inseparable mass. It must have taken immense patience to ink those lines and pluck those seeds. It must have necessitated, too, an exceptional ability to sense and manage the ordered chaos that makes up our world. Armstrong’s lines bewilder, and they are alive.

Some two million people are currently incarcerated in the United States. In an era of hyper accessibility—where thanks to Google View and social media anyone remotely wired seems to have access to everyplace and everyone at all times—this situation poses a startling and unbreachable barrier. Evelyne Leblanc-Roberge has found a disarmingly old-fashioned way to bridge it. The artist wrote letters to inmates, asking them to send her descriptions of the spaces in which they live and those they dream about. In return, she gave them photographs inspired by their words. Published in a compendium titled “  Wall + Paper,”   Leblanc-Roberge reveals a twist: her pictures are odder than expected. To a prisoner who wrote of creating comfort wherever he lands, she offers an image of a snow angel. For a palatial interior, she presents birds dispersed in a storm-clouded sky. Jail locks down the body in space, but Leblanc-Roberge’s project insists on the freedom still afforded to the spirit and the intellect.

History is a funny thing. Well, perhaps not funny so much as sad, infuriating, and often as not, very hard to believe. Caitlin Cass mines the endless trove that is the past to make engrossingly dry comics and installations that tell forgotten tales in ways designed to tickle contemporary humors and also make them twitch with minor pain. Through drawings wittily styled to mimic the aesthetics of their time, Cass recounts not the great moments of history books but the not-so-great ones. And why not? Failures—like those of R.R. Whitehead and Benjamin Rathbun (you’ll have to read her limited edition publications for the details)—provide important lessons in human flaw and error. Just imagine what Cass’s successors will make when they look back on today.

Here’s what I see while surrounded by the artwork of Tony Nash: a live webcam of goldfish swimming in a tank next to a human skull, an oil portrait of a morel mushroom, deftly painted views of a freeway overpass and picturesque grain silos, a bold shark floating in a bright blue sea, neatly outlined and quirkily colored digital busts of people on their birthdays, a whole lot of QR codes, and an irresistibly goofy music video ode to the ice boom. What’s it all got in common? That it’s the world around here. It’s the scene inside and the outside, on the internet and in the forest, peopled by folks and creatures familiar and unknown. Sometimes it needs to be represented by oil on canvas, sometimes with an open-source program called GIMP and a digital synthesizer. Nash, who has been making art for decades, impresses with the open-armed vitality of his vision, and inspires more in return.

There are people who doodle, and people who don’t. Thomas S. Coyne, I’m betting, belongs to the former category. His marginalia, however, refuse to stay on the border of the page. They jump up, grow large, and take their rightful place at the center of Coyne’s tart, mottled canvases. Actually, they don’t just sit in the middle, they multiply and spread out until they reach the edges where they first began. In paintings like “  Sprawl”  and “  Sprawl II,”   they take on hard-edge geometric shapes then cluster and layer until something half like a city, half like a maximalist Hans Arp picture emerges. In “  Green Eggs”   they ooze and split, congeal and settle, like bubble letters with something too organic and vibrant to say. Coyne’s paintings use color and form to speak for the scraps left on the floor, for the negative space between the letters. All the viewer has to do is learn to listen.

Art does not well capture the glories of nature. The hoodoos of Bryce Canyon are too weird, the silence of a snowy northern Vermont forest too delicate, the scale of the Grand Canyon too vast. Nevertheless Pam Glick has chosen Niagara Falls as a subject to paint since 1980. Wisely foregoing realism or anything like it, Glick uses pigment and pencil on corrugated cardboard, from small squares to tall narrow slabs, marking each with cascading lines over swaths of basic color. Cardboard provides a built-in ripple when paint and graphite wave over it. It bends, as in a piece Glick wittily folded to create connected vertical and horizontal streams, one against the wall, one on the floor. It’s also cheap and readily available, good for a subject that, just as it will never stop moving and shifting, can never be truly complete.

I used to have a favorite tree. It stood on the front lawn of my family’s bungalow in the suburbs of Montreal, and it was small enough that I could climb up into its branches by myself. I recalled this plant from my past while looking at the paintings and scroll drawings of Sarah Myers, which take individual ginkos, maples, birches, oaks and others as their unique subject. Myers does not depict surrounding forests or landscapes or cities, just trees, on their own, standing tall and proud against blank or monochromatic grounds. Surprisingly, her pictures have no relation to the categories of landscape or nature study. Rather they are portraits that represent trees as another artist might image a person: as stand-alone individuals, complete with idiosyncratic personalities and histories, deserving recognition of their grace and dignity. In Myers they have found it.