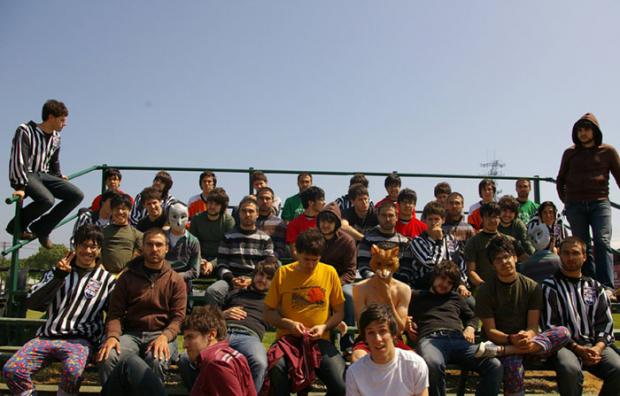 In 2006, This Day and Age, an indie rock band—though these days they might be remembered by some as an emo band—from Buffalo, New York abruptly broke up. For those paying attention at the time, This Day and Age seemed to be kind of the head of the local music scene—they were one of a few local bands that had recently signed to a fairly new but quickly rising record label, the Warner Brothers Records imprint, One Eleven Records and they had just finished a  series of tours with the popular emo bands like Mae and The Spill Canvas. But people change, and plans change, and things don’t always turn out the way we expect it to looking in from the outside. Lead singer Jeff Martin moved from his hometown of Buffalo to Philadelphia soon after the break up, and the remaining members of This Day and Age went on to form the indie rock band The Reign of Kindo. Friendships have remained though—the holidays, of course, bring old friends back together—and at this time last year the seeds were planted for a This Day and Age reunion show. The band will reunite for the first time in 11 years for a show this Saturday, December 23 at the Town Ballroom joined by M.A.G.S. and the recently formed indie rock band The Eaves. This week we talked to This Day and Age singer and guitarist, Jeff Martin, about what it’s been like to revisit a band that once helped define a local music scene.

You grew up in Buffalo now you live in Philadelphia. How did you end up there?
I’ve lived in Philly for almost 10 years now. I lived in Buffalo until 2007 and I moved right after I left This Day and Age. I was just kind of ready for a change. This Day and Age was so tied with Buffalo, I just felt like it was time to move on once that chapter ended.

Tell us a little bit about what you’ve been up to since the end of This Day and Age.
Joey, Mike, Kelly, and Steve all started Reign of Kindo and I moved to Philadelphia in August of 2017. Basically what I’ve been up to is, I got married, I have two kids, so I’m kind of really a true adult. I’m involved with the music at my church. I started another band, which is very very very part time but it’s called Pompton Lakes. We put out one album a few years ago. It was a small thing. But before that, in 2010, Steve from This Day and Age and Reign of Kindo and I, we put out an album that was kind of like two solo projects combined. Then in 2012 or 2013 I put out this Pompton Lakes album with some friends from this area and we played some shows locally but with our first time lives. I haven’t done music full time since This Day and Age.

Why is now the time to do a reunion show?
Steve and I have been kicking it around for years now. My buddy Chris Ring, the promoter, he was bugging me for years to do a This Day and Age reunion. Last Christmas all five of us were sitting around at one of our friend’s, who always has a day after Christmas breakfast with a bunch of people, and we were all just sitting there and we said “Oh we could have done a show this year.” So I think that just kind of carried over to this year. We just passed 10 years a little while ago, that was kind of trendy. We have a bunch of friend’s bands, like Mae, The Spill Canvas, and a lot of these other bands that have been doing reunion type things, bands that we’ve toured with, and I think we just thought “why not?” I don’t think there’s anything big to it. We all come home for the holidays; a couple of those guys live in New York City. We just wanted to see if anyone still cares.

When was the last time you played any of these songs? Has it been 10 years since you’ve played them?
Yeah. It’s been actually 11 years. November 2006 was the last This Day and Age show. It was at Club Infinity. That was a weird thing. I basically told the guys that I was going to leave the band during that same tour, it was a One Eleven Records tour. We were out with Rookie of the Year and a couple other bands that were on the label. We had to decide pretty quickly that Buffalo was going to be the last show. I knew the other guys wanted to continue something and I think we just decided that we didn’t want to prolong any kind of decision about it. All I have to say is that show quickly became our last show and it was kind of a whirlwind. It was really special night. I still remember it. I’m looking forward to seeing what it’ll be like this weekend.

What was it like getting back into the mindset of that band and all of your songs?
Two weeks ago we all got together, we rented a practice space in New York City. We got together and played all day and just let the songs refresh themselves in our minds. When we first decided to do the show, I had to spend a good couple of weeks just relearning some of these songs. They felt like new songs to me because it’s been so long since I’ve even thought of them. It’s also just weird for me to go back to the places I was at mentally or emotionally or spiritually or whatever, when I wrote these songs. Some of these songs I wrote when I was 20 years old working at the UPS store while I was bored and knew that we were going to record our first album. And all of the relationships that it reminds you of, all of the places that it reminds you of, all of the tours that it reminds you of, I guess it was surprising how it hit me in some ways. A lot of these songs are still really meaningful to me, which caught me off guard a little bit.

You mentioned Club Infinity. I remember back in the early 2000s seeing This Day and Age at the Showplace Theater and the Icon, and you would play shows with bands like Wide of the Mark, Jinxed, and Today’s Not Tomorrow. Looking back now, how would you describe that Buffalo scene at the time?
I really thought it was pretty special. Even looking back. We had a real brotherhood with some of the other bands. The bands you mentioned, then there was a band called Ill at Ease and even before they became Cute is What We Aim For, Cherry Bing, and all of these bands that we really became good friends with. I think looking back, that was one of the special things about Buffalo. I moved to Philadelphia and with my other band we tried to get some shows around here, and it seems like, for a local music scene, it was more difficult to, like, nail down, so it kind of made me think that the things we had in Buffalo for those few years was kind of a special thing. It reminds me, one of the first This Day and Age shows was us and Wide of the Mark and we played this little festival at Kenmore West High School. They became Speakerfire, and up until our last This Day and Age show, I think we included Speakerfire on the bill. That friendship kind of spans our entire history.

You’ll be playing songs from Always Leave the Ground and The Bell and Hammer at the reunion show. How do you see those albums now?
In some ways, once you get over the hump of relearning the songs, they come back quickly. They were a huge part of my life for a long time. There were a couple years there where This Day and Age played a couple hundred shows a year, so I mean, in some ways, although I’m partially afraid to forget some of the lyrics on Saturday, in other ways they are really ingrained in me. Another thing that struck me is how different Always Leave the Ground and The Bell and the Hammer are. The Bell and the Hammer has always seemed to me like ahead of its time. I don’t know if that’s arrogant to say, but it was such a big jump from Always Leave the Ground and I think we alienated some fans because Always Leave the Ground was the album that helped us gain a lot of momentum, and there’s a pretty stark difference in those songs—the mood, the structure, the complexity. I’m equally proud of both of those album, they’re just so different.

How would you say you’ve changed as a musician?
Pompton Lake, as we’re writing new songs—I still try to find time to write music here and there—I find that it’s still kind of a good progression even from The Bell and the Hammer. It’s still that kind of melodic rock, like Sunny Day Realestate—and you know, everyone wants to be Radiohead—but that kind of thing. I think the main way I’ve evolved is I’m just more comfortable with who I am and what I’m good at and what I’m not. And that’s not to say that you can’t be stretched and you can’t grow, but I think you spend a lot of your 20s as a musician maybe trying to be impressive or trying to do things that you can’t or shouldn’t.

What do you think lies in the future for you as a musician? Do you see more This Day and Age in the future?
That’s a good question. We talked about it very briefly while we were practicing a couple weeks ago and we’re doing a lot of work for this show, especially individually. We haven’t made any plans but we’re kind of thinking maybe we should do a few more shows next year in the Northeast. What would it be like to do some shows around those areas? Another trendy thing is doing like a previous album reimagined. So we thought, Always Leave the Ground, that’s more of our pop rock album, if we redid those songs now, what would they sound like in 2018? So all of that depends on a lot of stuff. That’s a long winded way of saying I think we’re open to things. It’ll never become what it was but I think we’re open and we’re looking forward to Saturday.