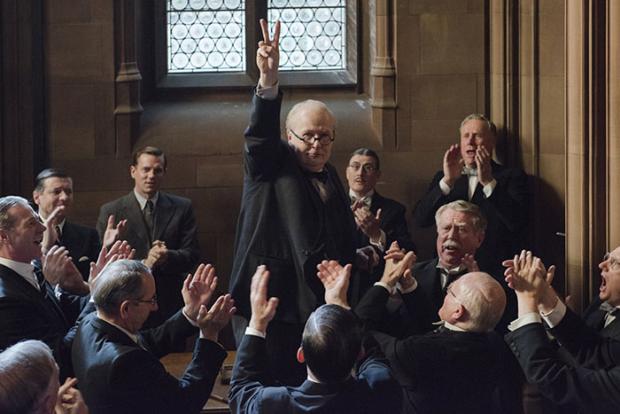 If you’re so inclined, you can regard Joe Wright’s Darkest Hour as an unintended complement to Christopher Nolan’s recent epic Dunkirk. Both portray events in the same brief period at the beginning of the Second World War, May and early June of 1940, when Great Britain faced the capture or destruction of most of its army on the coast of northern France by the rapidly advancing German forces. Nolan’s film portrays the troops’ near-miraculous rescue in a fashion that’s both sweeping and personal. Wright’s movie focuses closely on events across the Channel as Winston Spencer Churchill became prime minister of a beleaguered government and nation.

Of course, you don’t have to have seen Dunkirk to enjoy Wright’s pacey, talky biopic. Written by Anthony McCarten, it is also by turns witty, broadly humorous, and sentimental. It works up its own kind of tension, and even manages to more or less accurately include some of the historical record as it strains, with a fair amount of success, to entertain.

Churchill and the events at Dunkirk have been a bull market at the movies and on TV over the last several years. Besides Dunkirk, over the summer there was Lone Schlerig’s Their Finest with its lightly poignant and humorous riffing on official British propaganda efforts around the Dunkirk rescue and their use in eliciting American support for Britain in its extremity. Recently we also had Churchill impersonations from Michael Gambon, John Lithgow, and Brian Cox on TV and movie screens. Forty years ago Richard Burton gave it a try in The Gathering Storm, followed by a number of others. Churchill seems to be the screen’s counterpart to the allure Hamlet has for stage actors.

Darkest Hour illustrates why. From beneath the cosmetic superstructure, Oldman renders a rip-snorting performance that has been producing the expected awards predictions from handicappers. His P.M. is variously pugnacious, smugly self-possessed, rhetorically soaring, acerbic, and sometimes privately abashed. Churchill was one of the Western world’s greatest political actors, a man acutely aware of his effect on the public. This is doubtless part of the appeal to professional actors, along with the heroism, actual and performatory, that accompanied Churchill’s career.

Labor Party leader Clement Atlee once sniped that Churchill’s contribution to the war effort was to talk about it. Even a softened, populist depiction like this movie’s indicates that’s far from accurate, but it does contain significant truth. Words matter, particularly in dire straits.

Darkest Hour picks up the story as Churchill becomes prime minister despite the misgivings of his predecessor, Neville Chamberlain (Ronald Pickup), Foreign Minister Lord Halifax (Stephen Dillane), and King George VI (Ben Mendelsohn). Many in his own party considered him an erratic political freebooter, not without some reasons. Chamberlain and Halifax considered the war already lost and wanted to sue for peace with Hitler’s Germany and then replace Churchill. More desperately, Chruchill has to contend with the imminent loss of most of the British Army at Dunkirk. The film follows the weeks-long political struggle at Number Ten Downing Street and the meetings in the underground government bunkers. It’s very much in the Great Man historical tradition, but even Marx thought Abraham Lincoln’s election and leadership mattered. Females don’t figure in the movie very importantly. Kristen Scott Thomas is stalwart and supportive as the great man’s wife, an unrewarding role. Lily James has a slightly better opportunity as the P.M.’s typist, bullied and ignored, but eventually able to make a personal connection to him.

Wright directs in his customary technically emphatic and sometimes gimmicky fashion—he has a penchant for overhead shots—but he keeps things moving. But he and McCarten go narratively overboard in an outrageously bogus sequence that has Churchill capriciously taking his first-ever underground ride and soliciting opinions from doughty, work-a-day Brits who urge him to remain resistant to capitulation.

Sentimental flights of fancy included, this movie’s Churchill is likely to remain the one huge numbers of people remember.