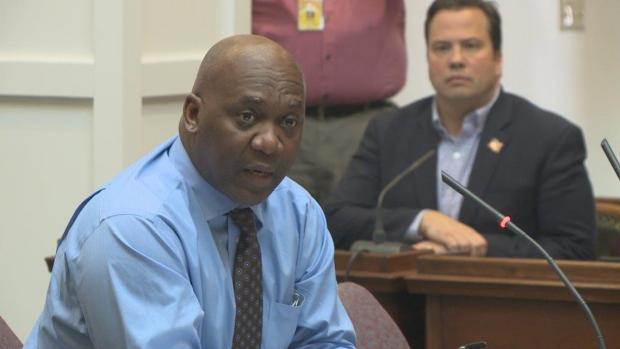 Efforts to implement cash bail reform in Erie County and New York State, which we’ve been tracking all year, got a huge shot in the arm in the form of Thurman Thomas, who was recruited to give testimony last week at an Erie County Legislature hearing by Legislator April Baskin. The pro football Hall-of-Famer spoke directly to the injustice of cash bail, and how his community suffers the results. “It’s important to me because I see all these laws don’t help us as a community,” he said. “We need to start helping our community a little bit more.” People arrested on minor charges can be held for weeks just for the inability to scare up a few hundred dollars. “You’ve got to get out. Hopefully you’ll still have your job to get your paycheck and pay the bills, and then you’ve got to pay the ten percent back to the bail bondsman,” Thomas said. “That’s a lot for a people who are not making a lot of money here in the inner city of Buffalo, and that’s where the problem is.” Thomas, who supported Carl Paladino’s gubernatorial run in 2010, is generally not outspoken on political issues, but he is arguably among the most recognized and influential African-American voices in Western New York. Welcome to the fight, number 34.

You read it here first: Last week we reported that Republican Erie County Legislator Kevin Hardwick might jump the GOP ship and caucus with Democrats starting in the new year. Over the weekend he made it official, communicating to Erie County Republican party chairman Nick Langworthy his intention to part ways with the Republican-Conservative-Independent caucus. “I want to be in a caucus where compromise is not equated to a sell-out and where I don’t need permission to speak to a member of another party. It’s silly,” Hardwick told the media. There’s more to it, of course: Hardwick is close to Democrat Peter Savage, whose retention as chairman of the Legislature was threatened by the defection of Democrat Tom Loughran to the Republican-Conservative-Independent caucus. Hardwick would like Savage to continue as chairman, and his defection to the Democrats guarantees that he will. (Langworthy, responding to Hardwick’s move, labeled Hardwick a “sellout”; oddly, Langworthy has not publicly attached that pejorative to Loughran, who wanted the chairmanship for himself.) Hardwick also has a bad relationship with Conservative Joe Lorigo, the minority leader, who joined Langworthy in pillorying Hardwick for working with Erie County Executive Mark Poloncarz and Democrats in the Legislature to get a 2019 budget done. Poloncarz is up for re-election in 2019, which is enough of a reason (and perhaps the only reason) for Langworthy and Lorigo to be furious at Hardwick for being collegial with the putative opposition party.

Last Tuesday night, according to reports made by the police to media, a man named Marcus Neal was shot and killed by police on the flat roof of a garage near the intersection of Military and Hertel. Buffalo police allege that the 47-year-old man stole items from Wegmans on Amherst Street and led police on a one-mile foot chase. The bizarre incident culminated in three officers confronting Neal on the roof, and with Neal allegedly threatening himself and officers with a knife, leaving 25-year-old Officer Joseph Meli no choice, according to police, but to shoot. “You match force with force,” Captain Jeffrey Rinaldo said. Rinaldo also claimed that officers did everything they could to de-escalate the situation with verbal commands and pepper spray, to no avail. The quality and quantity of use-of-force training offered by the Buffalo Police Department, including various de-escalation tactics, has been the subject of several years of reporting and criticism from the state attorney general’s office. As recently as last year, the department’s use-of-force training didn’t go far beyond a simple, multiple-choice test with 10 questions, such as: “The use of pepper spray should be considered before the use of physical force, true or false.” That same report mentioned that the BPD had started to employ live, scenario-based training, with some indication that a training facility for such exercises would be built in the new headquarters that BPD has just moved into. (We’re told that move has incurred some serious cost overruns.) The problem is that there have been two recent fatal encounters since September, and the officers in both incidents were relative rookies. Elnur Karadzhaev, who shot and killed Rafael “Pito” Rivera in September, joined the Buffalo Police Department in 2017, and Meli is in his first six months on the streets. And, by the way, where the hell is Commissioner Byron Lockwood on all this? After Rivera’s death in September, it was Deputy Commissioner Joseph Gramaglia making statements to the media, and now it’s Captain Rinaldo. The community deserves to hear from Lockwood himself, whose vision of community policing might not include chasing down a guy for over a mile with weapons drawn over stolen food. On Monday, a civil rights attorney claiming to be Neal’s uncle posted on Facebook about his nephew’s death some concerning details regarding the police’s official narrative of events:

Some guy in Depew says he’s been throwing away our papers because he didn’t like the piece we published two weeks ago critical of the late George H. W. Bush by columnist Michael I. Niman, who the guy from Depew, in a voicemail message, called “a real Jew.” We’re trying to track down the guy from Depew, who gave us his name but not his phone number, to tell him what he did is against the law. Here’s his voicemail: