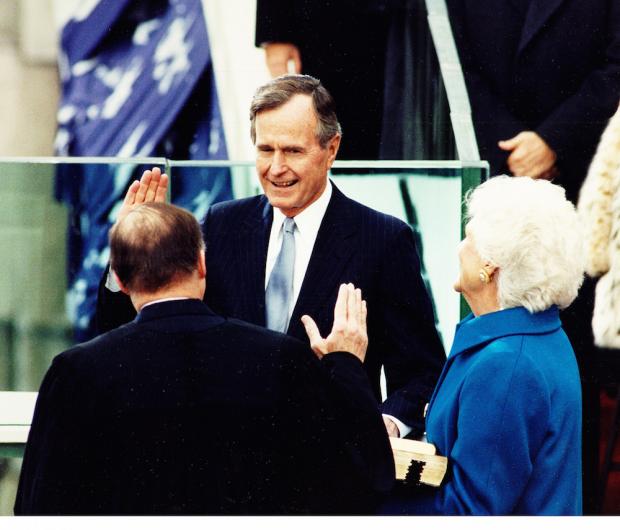 We’re supposed to speak kindly of the dead. And we’re supposed to bury our dead presidents with the type of fanfare and reverence that the colonial forebearers of this nation’s white settlers reserved for royalty. Today, as we prepare to bury the nation’s 41stpresident, George H. W. Bush, the American press corps is carrying on this tradition, eulogizing him primarily by celebrating his polite demeanor and his successful self-representation of civility. Yes, the 41st president presented as a nicer person than the 45th, or his son, the 43rd. But for the people whose countries or lives were destroyed by his violent actions, he’ll always be a monster. Sanitizing his story amounts to historical revisionism. Below are just eight of the many reasons why, beneath the civility, George H. W. Bush was a detestable president.

Let’s start with racism. The now infamous Willie Horton campaign ad successfully deployed by team Bush in the 1988 campaign for president featured images of Willie Horton, a Black man serving a life sentence for a felony murder conviction who escaped from custody while on a weekend furlough from prison, and went on to rape a white woman and brutally assault her fiancé. The governor who signed the furlough was Bush’s Democratic opponent, Michael Dukakis. The sitting president, Ronald Reagan, signed identical furlough requests. Most governors did as a routine matter. But the Bush team made this furlough central to their campaign using blurry high-contrast images of Horton that resembled wanted posters for runaway slaves in the antebellum South.

The Willie Horton campaign ad blew a powerful dog whistle awaking white racism and fear. The success of the ad spurred a generation of race-baiting ads by Republican candidates that have picked at the nation’s festering racism and undermined racial justice. Guided by Newt Gingrich, the new racist campaigns used coded us vs. them language to provide a veneer of plausible deniability to otherwise racist messages. A deniability that the crude Bush campaign lacked. Longtime Republican operative Roger Stone, most recently of Trump fame, at the time warned Bush and Republican National Committee Chair Lee Atwater, “It’s a racist ad” and “You’re going to regret it,” explaining “You and George Bush will wear that to your grave.” Atwater, before dying in 1991, apologized for the Willie Horton campaign ad. Bush never did.

2. The Invasion of Panama

Barely one year into his presidency in December of 1989, Bush invaded Panama for the ostensible reason of executing an American arrest warrant against that nation’s populist strongman and leader, Manuel Noriega. Noriega, for his part, was a CIA asset during the period when Bush was CIA director prior to becoming Ronald Reagan’s vice president. Noriega also served the US as an asset during the Reagan-era Contra War against Nicaragua, when he was photographed meeting with Bush. By 1989, however, Noriega was difficult to handle. The invasion to arrest him cost the lives of as many as 3,000 Panamanians and destroyed the working-class Panamanian neighborhood of Chorrillo. The Bush administration named the war “Operation Just Cause.” The Inter-American Commission on Human Rights this year ordered the US to pay reparations for the war, though that’s not going to happen anytime soon.

Bush launched the Gulf War, first as Operation Desert Shield in August 1990, then intensified it as Desert Storm in January 1991. Ostensibly, the war was to restore the Kuwaiti monarchy to power after that nation was invaded by Iraq. Saddam Hussein, however, invaded Kuwait only after effectively receiving the green light to do so from Bush’s ambassador to Iraq, April Glaspie. The war saw 88,500 tons of bombs fall on Iraq and Kuwait over the course of 43 days, initially killing as many as 13,000 Iraqi civilians and 20,000 Iraqi troops, most of whom were killed by bombardment as they fled Kuwait.

The bombs targeted essential Iraqi infrastructure, such as water and sewage treatment facilities, food processing plants, agricultural facilities and the nation’s electrical grid and transportation infrastructure. As many as an additional 70,000 secondary Iraqi deaths resulted from this infrastructural damage. The sanctions that followed Desert Storm caused the premature deaths of as many as 500,000 Iraqis. Shiite and Kurdish rebels who Bush’s State Department encouraged to rise up in rebellion against the Iraqi government of Saddam Hussein during Desert Storm were abandoned by the US once Iraq fled Kuwait.

4. The Racist War on Drugs

Bush the warrior was on a roll during the first two years of his presidency, also escalating the so-called War on Drugs. In 1989 he held a live televised address from the White House holding up a bag of crack seized by police in Washington’s Lafayette Park across Pennsylvania Avenue from the White House. The bust later turned out to be a PR event orchestrated by agents who lured a drug dealer into the park. Citing the high-profile arrest across from the White House, Bush called for “more prisons, more jails, more courts, more prosecutors” while maintaining the racist legal disparities that made Black drug users 12 times as likely to go to jail as white drug users.

As president, Bush used his office to obstruct justice and thwart investigations into the criminal activity of the Reagan administration, where he served as vice president. The October surprise refers to allegations that representatives of the Reagan campaign conspired with Iranian leaders prior to the 1980 presidential election. At the time, Iranian students were holding 52 American hostages in Iran, to the embarrassment of the administration of President Jimmy Carter. According to the allegations, Reagan campaign representatives cut a deal with Iran to hold the hostages until after the election, thus making Carter seem weak.

Witnesses placed Reagan’s campaign chief and subsequent CIA director, William Casey, meeting with Iranian government representatives in Madrid during the 1980 campaign. But Bush, as president, thwarted the investigation by withholding important information regarding Casey’s whereabouts at the time he was supposedly in Madrid. Without this corroborating evidence, the congressional task force investigating the October surprise had to dismiss the allegations. In 2013, Lee Hamilton, who chaired the investigation, admitted that it might have ended differently if Bush didn’t withhold evidence. Investigative reporter Robert Parry, who passed away earlier this year, reported in 2013 that archivists at the George H. W. Bush library released documents to him revealing White House knowledge of the incriminating trip. Historians are hoping that with Bush’s death, more records from this period will be declassified.

The hostages were held through the election and released on Reagan’s inauguration day. If a deal was made to stall the release of the American hostages, that would amount to treason, much like presidential candidate Richard Nixon’s moves to stall President Lyndon Johnson’s Vietnam peace deal in order to affect the 1968 presidential election.

What became known as the Iran-Contra Affair involved a complex chain of interconnected activities where the Reagan administration sold missiles to Iran while they were technically an enemy state hostile to the US. This was supposedly payback for the aforementioned hostage deal. The dark money from the missile sales was used to fund “Contra” terrorists (a.k.a. “liberation fighters”) waging war against the democratically elected Sandinista government in Nicaragua. This money was necessary after Congress cut off funds to the Contras because of bad press about unsavory activities, such as assassinating elected officials and bombing schools, clinics, busses and electric stations.

Independent Counsel Lawrence Walsh’s subsequent investigation of the Iran-Contra affair was obstructed by Bush, who, before leaving the White House, issued pardons to six targets of the investigation, most notably the former defense secretary, Caspar Weinberger, who was about to go on trial. According to Walsh, Bush’s pardon of Weinberger, “marked the first time a president ever pardoned someone in whose trial he might have been called as a witness, because the president was knowledgeable of factual events underlying the case.” Walsh, a Republican who previously served as United States deputy attorney general under President Eisenhower, accused Bush of “misconduct” in helping to cover up the Iran-Contra affair.

Bush’s main crime here was an indifference to human life, which manifested itself in inaction as the AIDS plague continued on unabated. More focused on wars than on domestic affairs, Bush’s priorities did not include funding any meaningful action to stem the AIDS crisis either through research or treatment. His ignorant stance on the disease, which when uttered as president, contributed to false narratives, undermining any meaningful response to the crisis. Focusing on gay men, he argued that the disease vectors were behavioral. At the same time, in other parts of the world, poverty and not sexual orientation or intravenous drug use, were emerging as vectors. When AIDS activists reacted to his comments, Bush responded that “You can’t talk about it [AIDS] rationally.”

Bush also gave us the notorious off shore limbo of the Guantánamo Bay detentions. When Haitian refugees escaping the violence surrounding the 1991 coup in that country sought asylum in the US, Bush opened up a camp for them at the US naval base at Guantánamo Bay, Cuba. His purpose was similar to that of his son, George Jr., in that he wanted a place to hold people without allowing them on US soil under protection of US law. To Bush, the Haitians posed a threat unlike any other refugee group or migrant population.

Of course, none of these instances of cruel and detestable behavior contradict the claims made in political obituaries about George H. W. Bush’s civil treatment of those whom he deemed worthy of civility. His treatment of Presidents Clinton and Obama, for example, are hallmarks of political civility. Amid the praise of that civility, however, we must not forget that he was also a despicable person whose presidency set us on a course to endless war, led to hundreds of thousands of deaths, established a model for racist dog-whistle politics, undermined the humanity of AIDS sufferers, covered up criminal activity at the highest levels of government and worked to undermine not just government accountability, but also the rule of law.

This article first appeared at Truthout.org. Dr. Michael I. Niman is a professor of journalism and media studies at Buffalo State College. His previous columns are archived at mediastudy.com and are available globally through syndication.