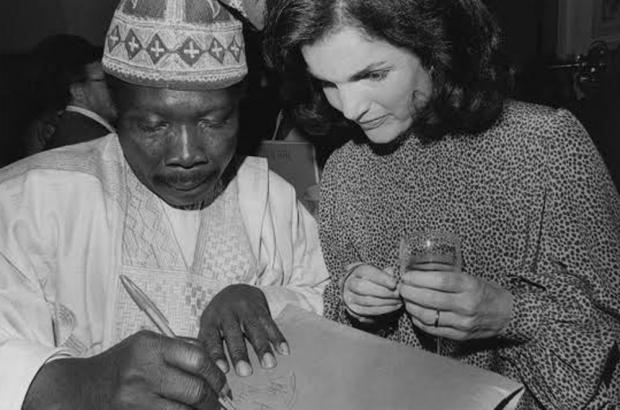 There is just one last chance (for now, at least) to view The End of the Game: The Last Word from Paradise, Revisited. The exhibit features photos by photojournalist and ¡Buen Vivir! Gallery director Orin Langelle that document famed photographer and artist Peter Beard’s one-person show at Manhattan’s International Center of Photography (ICP) in 1977. The exhibit closes Dec. 17.

Langelle shot the photos over four months during the installation, opening and parties surrounding Beard’s End of the Game exhibit. Visitors will recognize many cultural icons socializing in the photos, including Andy Warhol, Jackie Kennedy and Truman Capote. These, when juxtaposed with Beard’s work documenting the impacts of Western-style “conservation” in Africa–including the deaths of 35,000 elephants–creates a broad and compelling exhibit in which viewers are taken from the desolation of the African flatland to the glitz of Studio 54 in its legendary heyday.

The closing is unlikely to be the finale for The End of the Game–Revisited, however.

“Nejma Beard is working on having all or part of the exhibit displayed at the Gordon Parks Foundation Gallery outside of Manhattan,” Langelle said. “Also Peter is having a one person show this June at the Guild Hall Museum in East Hampton and Nejma has asked me to include some of my photos in it.”

¡Buen Vivir! Gallery, at 148 Elmwood Avenue, will host a closing reception for The End of the Game, as well as a Solstice Party for Global Justice Ecology Project, on December 17, 6-9pm. The event is free and open to the public. For more information, visit BuenVivirGallery.org.

To view an extended interview with Langelle, read here.