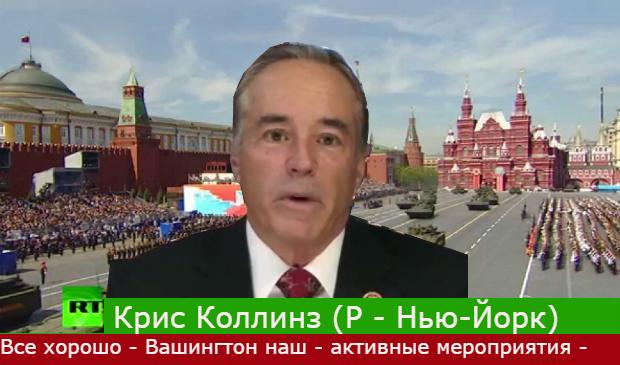 Collins told the Buffalo News’ Jerry Zremsky and CNN’s Alysin Camerota that the “truth came out” as a result of apparent Russian hacking of private emails, so it doesn’t really matter. You don’t have to read between the lines to get that he feels this way because his side gained political advantage therefrom. “We can’t change it”, so why bother investigating it, he argues. Sort of like how you can’t “change” what happened in Benghazi. Sort of how you can’t “change” Hillary Clinton’s use of a private email server in her home. Sort of how you can’t “change” Obamacare, knowing that President Obama would veto any such effort, yet Collins’ congressional colleagues held a vote to abolish it on no fewer than 62 times. I guess you only need to “move on” and “accept” the results of something when you’re a Republican and the topic is the cult of personality you just elected President.

Hey, if it’s time to “move on” and “accept” the results, maybe Trump doesn’t need to go on a victory tour.

Chris Collins doesn’t have a deep or complicated set of beliefs. Basically, he is against anything that President Obama or any Democrat is for. He exists to comfort the comfortable and aggravate the less fortunate, and he knows just what to say and do to cruise to easy re-election in the most conservative Congressional district in New York State. What I didn’t take him for was a …

Well, you tell me.

Reports indicate that Russian intelligence services hacked these email accounts and possibly others. The emails were then provided to DC Leaks and Wikileaks, which in turn published them. The Russians’ motives aren’t definitively known, but it doesn’t take much to conclude that the aim was to weaken Clinton and/or bolster Trump. It is telling that Donald Trump has consistently refused even gently to criticize Russian neo-fascist dictator Vladimir Putin, and Trump’s Secretary of State nominee, ExxonMobil CEO Rex Tillerson, is very close to Putin.

It seems almost as if Putin is the last and only prominent person Trump refuses somehow to demean.

So Moscow Chris Collins, whited sepulchre that he is, struts upon a national stage and says that (a) he doesn’t agree with any investigation into alleged Russian hacking of private emails of the Democratic National Committee or Clinton campaign chairman John Podesta; and — more chillingly — (b) believes that the unredacted, unedited publication of private email correspondence is something about which he is ”glad”.

I’m saying thank heavens the revelations came out. The truth came out. You have to say: can you imagine an election won because of lies, deceit and underhanded despicable actions?

The palpable irony was evidently lost on the first congressman to support the candidacy of unrepentant liar and Twitter power-user Donald Trump. The entire Trump campaign was a Jenga set of lies upon deceits that Clinton couldn’t topple because of an email server.

Moscow Chris told the Buffalo News’ Jerry Zremsky, “[t]he election is over and Trump has won, and I think it’s time to unite the country and to say that Donald Trump is our president … The sooner we can move the entire country into recognizing the results of the election, the better.” That’s nice, dear. No serious person thinks the results of the election aren’t being recognized, and everyone acknowledges that Donald Trump is the President-Elect. Nevertheless, that doesn’t somehow obviate the need to ensure that every valid vote was counted, or to investigate the theft of private correspondence perpetrated by a hostile intelligence service masquerading as a country in order to influence our electoral process.

Our intelligence services accuse Russia of hacking into and stealing the private correspondence of private American citizens and organizations. Websites run by organizations with overtly friendly ties to regimes hostile to the United States then publised those private emails in their entirety, timing the releases to occur daily in the weeks leading up to election day. At best, it was all a contemptible violation of the privacy of people, many of whom have no political power whatsoever. Even if you believe in “transparency” — whatever that means — you can see how irresponsible and inappropriate this all is.

.@RepChrisCollins: We shouldn’t investigate potential Russian hacking because what will that really accomplish? https://t.co/r7xzvTsHfw

The Russians’ exact motives are still a mystery and up for speculation, but if you believe in things like foreign governments not interfering in our electoral process and online privacy issues, then this should be of paramount concern to you, regardless of party. When it’s your email or text message that Wikileaks releases, and/or when it negatively affects your preferred politician or political party, you’ll regret your nonchalance if you have a conscience and sense of decency.

Remember when Wikileaks released information about powerful governments that had been leaked to it by whistleblowers? The Podesta and DNC emails weren’t “leaked” — they were stolen.

If you take Moscow Chris’ word for it, if his staffers’ Gmail and Yahoo accounts are stolen and published, he won’t demand any investigation and simply “accept” that the “truth came out”. Indeed, I call upon him and his staff immediately to provide constituents with the passwords to their email accounts; after all, transparency and “truth” coming out are more important than any right to privacy. Doing anything less would be against Collins’ own words.

When Moscow Chris says, “thank heavens”, he’s expressing his schadenfreude — that prominent Democrats’ emails had been hacked and published, and this had adverse political affects. What if it had happened to the RNC or Steve Bannon? How would Collins react in that instance?

Interesting, because Nixon’s resignation was prompted by his covering up of a break-in to steal information from DNC HQ. This is only the second time in 50 years that the Republicans benefited at the ballot box thanks to the theft of information from Democrats, and Moscow Chris Collins not only endorses this, but ignores that it was a foreign attack. Until 2016, it was a given that Watergate and its subsequent cover-up were crimes. Now, Moscow Chris wholeheartedly endorses foreign cyberburglary in order to help Republican electoral chances. G. Gordon Liddy’s biggest mistake, it appears, would be his failure simply to retain the services of Soviet intelligence to execute his expletive deleted illegal wiretaps and break-in.

Asked if he thought the DNC’s actions were more important than a foreign power’s possible meddling in a U.S. election, Collins noted that hacking is a common occurrence.

“It’s not for sure that Russia did this hacking,” said Collins. “The CIA seems to think so, the FBI not so much. But in the end the truth came out: the cesspool of Democrat committee actions.”

So, the political ends justify the illegal means. Moscow Chris quite brazenly puts partisan politics over country, here. Not just that — but he overtly applauds a foreign power’s theft and publication of innocent Americans’ private communications. Whatever the Russians’ motives, their actions brought about the result they sought, and we now have a pro-Russian oligarchy being organized to perhaps give Russia’s own anti-democratic, neo-fascist kleptocracy a run for its money. By simply ignoring how damaging this theft and publication was to the idea of online privacy and the integrity of our electoral process and institutions, Moscow Chris adheres to — and gives aid and comfort to — our enemies. Putting party over country, Chris Collins is, at best, only a nominal patriot.

Convince me that it’s somehow too strong to call that treason.