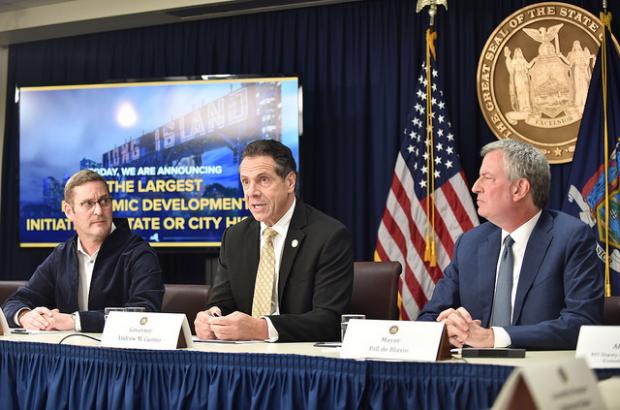 When Governor Cuomo took center stage at a midday press conference to announce that he had won (okay, tied) the contest for Amazon’s new headquarters, he beamed like a prom king. With the state’s motto, Excelsior / Ever Upward, blaring across screens behind him, our recently reelected governor gushed about the 25,000 jobs that will soon come to the Empire State, thanks to the deal his administration inked—in secret, hidden from our participation and even our eyes—to funnel billions of dollars of public resources to a trillion dollar company helmed by the world’s richest man. Unsavory aspects of the deal aside, the governor had cause to beam—the most ambitious company on the planet had chosen his state and his city, and you could just about hear the hearts of rejected governors, mayors, and county executives across North America breaking in concert. Snagging Amazon “HQ2” is the crowning achievement of the governor’s “Open for Business” economic development agenda, an agenda which has largely defined his first two terms, and which will surely define his legacy.

Of course, to haul in a white whale like Amazon, our highest elected leader had to offer more than well-pitched slogans, data points, and even heartfelt offers to rename everything from our waterways to himself.  And so while the inevitable taxpayer handout was initially reported as $1.5 billion, we now know that we citizens will be on the hook for around $3 billion. (This to a company that rakes in nearly $200 billion in annual revenue.)  To be fair to Mr. Cuomo, this top-down approach to economic development is not new, nor is it unique to HQ2 or to him. From Foxconn in Wisconsin, to Carrier in Indiana, and to Tesla here in Buffalo, using public resources to pay private companies for job growth has become the norm for any project involving that warm and fuzzy label: “economic development.”

Still, the new Amazon headquarters is a case apart, not just because of the sheer size of the project, but because of Amazon itself, a company which has never been shy about its intentions. Let’s look at the HQ2 sweepstakes. From the beginning, in cities across the country, and particularly in places like Buffalo, our leaders convinced themselves that they had finally found it: a gleaming silver bullet, packed neatly in an Amazon Prime package, here to restore and rebuild their city—if only they could prove themselves worthy of Amazon’s affection. But with the announcement that Amazon will build not one, but two new headquarters, split between the political power center of the world and the financial and media capital of the world, we learned that Amazon had altogether different things in mind from the winding line of its would-be suitors.

For Amazon, this was not a match-making process. What should have been obvious from the beginning is crystal clear now: It is not a city that Amazon seeks to remake in its own image; it is the world. So it should be no surprise that Amazon rebuffed the advances of cities like Buffalo and Detroit or even booming metropolises like Chicago and Los Angeles. Instead, the second company to achieve trillion dollar valuation will place permanent, manned footholds in the world’s power centers. From there, it will continue its march toward complete market domination in sectors from groceries to streaming television, gobbling up more and more of the global economy.

Our leaders want to convince us that this is a good investment of public resources. Since the announcement, the governor has dismissed as “nonsensical” any criticism of public investment in a project that includes building a private helipad for the world’s richest man. As Mr. Cuomo points out, that three billion dollars in public money will return dozens of billions more in tax revenue and result in a gain of 25,000 jobs. Who could be opposed to that?

Once again, Amazon is likely a few steps ahead of our elected leaders. This is not to say that Amazon won’t bring 25,000 well-paying jobs to New York; it almost certainly will. But Amazon, the company that has spent the last decade singularly disemboweling most of the country’s retail industry, does not exist in a vacuum. The same company that, after laying waste to brick-and-mortar retail, turned around and opened its own brick-and-mortar stores—but without human employees—is pretty upfront about its intentions for the world’s cashiers, store clerks, and sales persons. It is equally straightforward about the future of its warehouses (themselves heavily subsidized by cash-strapped municipalities).  Under Mr. Bezos’ leadership, Amazon has invested billions in a warehouse robot army which now stands at over 100,000 strong—more numerous than most actual armies.  And of course, the company is testing delivery drones which will soon be able to efficiently bring us our packages directly from those robot-manned warehouses, whizzing right over any pesky unionized, human delivery drivers. There is a reason Mr. Bezos has endorsed universal basic income; when he is done, we will all need it.

Against this backdrop, the implications of our state’s public investment in Amazon come into focus. We are not paying Amazon to hire 25,000 people. We are paying Amazon to effectively lay off hundreds of thousands more.

We cannot fairly blame Amazon for making this deal, for acting in its self-interest instead of ours. Our elected leaders are another matter. We must demand from them real solutions to economic inequality, to rotting infrastructure, to climate change, to the host of challenges we face. Until then, “economic development” will mean little more than Jeff Bezos’s helicopter lifting off a sparkling helipad, built by the people of the State of New York, rising above and far beyond shuttered small businesses below it, above and away from our blighted public transit, over rising seas lapping at unprepared shores, ever upward.

Dan Brady lives on Buffalo’s West Side. He wrote previously about the race for Amazon’s new headquarters here.