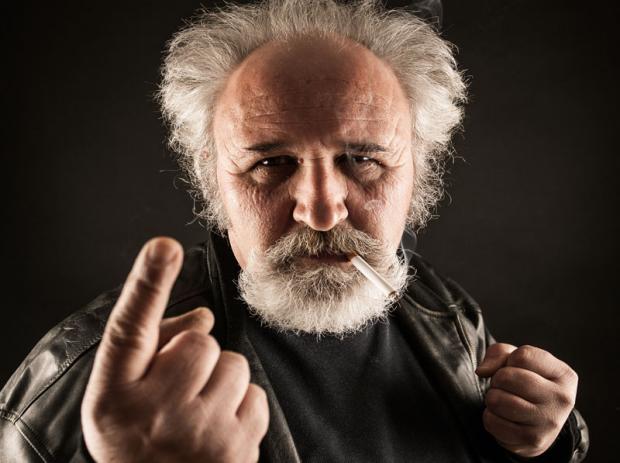 Dick La Hoyt isn't afraid to dole out punches, or take them, whatever the situation may be.
by
Devon Fick
/ Dec. 5, 2014 9am EST

This guy, let me tell you. All I was doing was standing there, minding my own business, looking at some brown carpet tiles. I wanted a carpet that would absorb moisture and put up with a real pounding but that would also look good in my basement game room. So I headed right away to Carpet Diablo. They never disappoint.

So, like I said, I’m just standing there and this asshole suddenly horns in on the tiles I’m looking at. Whole time, he’s chatting up his girlfriend, trying to look like big shit. I said, “WHOA, BUDDY. These carpet tiles are spoken for.”

Well, one thing led to another and the next thing you know, we’re in the weedy area in back of the store after closing time. There wasn’t nobody around on account of it being Sunday. And the guy, he says, “I’ll fight you, but first you better go over there and check on that pile of items wrapped up in that tarp. I don’t want no extra trouble.”

Well, I didn’t know what the asshole was talking about except that there was a big bunch of items on the far side of the lot. I got over there and shook some rainwater off the tarp and peeked inside. It was just a couple of bodies and a bunch of guns– usual kind of thing you’d see on a Sunday evening in Lankville. I go to turn around to tell the guy but the next thing I know, he’s right on top of me and he punched me forty-six times in the mouth. I heard the girl laughing and then I lay there for awhile. It was dark when I finally got up and found that my car had been towed. It was a hell of an evening.