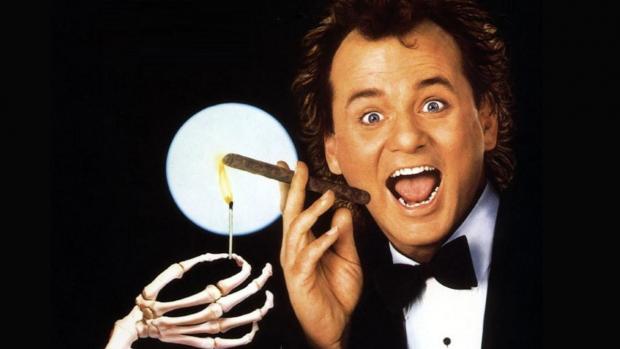 AN EVENING WITH ZAMIR GOTTA—The Russian personality seen on “Anthony Bourdain: No Reservations” will be present to screen two short films: Touch-Line (2009) about wounded Russian and Chechens who form a soccer team of physically challenged athletes; and The Stage Awaits (2011) about a Moscow-based theatre company whose actors all have Down syndrome. Mon 7 pm. The Screening Room, 3131 Sheridan Drive Amherst (837-0376) screeningroom.net

FROM HERE TO ETERNITY:  THE MUSICAL—From London’s Shaftesbury Theatre in advance of its 2015 Broadway opening, Tim Rice’s musical adaptation of the James Jones novel set on an army base in 1941 Hawaii prior to the bombing of Pearl Harbor. (Seems to me there was a film version in the 1950s, starring … oh, I forget.) Thurs Dec 11 7 pm. The Screening Room, 3131 Sheridan Drive Amherst (837-0376) screeningroom.net

ANNABELLE—Prequel to The Conjuring, which either means something to you or doesn’t. At least it’s not another “found footage” horror film. Starring Annabelle Wallis, Ward Horton and Tony Amendola. Directed by John R. Leonetti. McKinley

BIRDMAN—Too much and not enough. Alejandro Gonzalez Iñárritu’s “meta-movie” stars Michael Keaton as Riggan Thomson, a once famous actor whose career took a downturn after he stopped playing the superhero character he was famed for. In need of a comeback vehicle and artistic validation, Thomson mounts a Broadway play as a vehicle for himself, a troubled production that forms the basis of this film’s increasingly wild proceedings. It’s certainly challenging, dynamic and technically fluid. But it’s also erratic, lurching from scenes of banal domestic confrontation and confession to deliberate comic excess to surreal flights. In the end it’s too much structural complexity for one film to handle. Co-starring Zach Galifianakis, Edward Norton, Andrea Riseborough. (GS) Amherst, Eastern Hills

THE BOXTROLLS—Animated children’s movie from the studio that created ParaNorman and Coraline. Directed by Graham Annable and Anthony Stacchi. McKinley, Movieland

DUMB AND DUMBER TO—A few good laughs at the end aren’t worth the agonizingly dull 100 minutes preceding them in this sequel to a hit from 20 years ago. Creators the Farrelly Brothers (There’s Something About Mary) seem to have lost the light touch they used to have with bad taste; combined with the noticeable aging of stars Jim Carrey and Jeff Daniels, it makes for a desperately unfunny comedy. With Kathleen Turner, Rob Riggle, and Laurie Holden. (MF) Flix, Maple Ridge, Regal Elmwood, Regal Niagara Falls, Regal Quaker, Regal Transit, Regal Walden Galleria

FURY—War has seldom been portrayed more hellishly than in writer-director David Ayer’s (Training Day) film that follows an American tank crew in the very last days of the Second World War’s European Theatre operations. Brad Pitt plays the sergeant leading this crew as a quasi-mythic figure, a profane but all-American warrior-saint. His philosophy is presented as he trains a green kid (Logan Lerman in a sensitive, persuasive performance) in the cynicism and savagery that are natural consequences of war. The theme of brothers-in-arms fades under all the juvenile pulp-fiction fantasy, and by the last overblown, drawn-out, catastrophic battle scene, it has become impossible to take seriously. With Shia LaBeouf, Michael Peña and Jason Isaacs. (GS) Four Seasons, Movieland, Regal Elmwood, Regal Quaker, Regal Transit

HORRIBLE BOSSES 2—It’s less offensive than the original, which probably won’t be a selling point. The story pits ordinary guys Jason Bateman, Jason Sudeikis and Charlie Day against the financiers (Christoph Waltz and Chris Pine) who ripped them off, but it hardly matters: Director and co-scripter Sean Anders, currently hot in Hollywood after the success of his screenplay for Meet the Milllers (he also wrote Dumb and Dumber To) is mostly concerned with repeating what audiences liked about he first movie: sex-addict dentist Jennifer Aniston talking dirty, Jamie Foxx upending gangsta clichés, and the three stars doing a cross-talking routine that is funny even when the dialogue isn’t. In the interest of bringing back every surviving character Kevin Spacey also pops up briefly; bet he got paid a lot of money for what looks like a single day’s work. (MF) Flix, Maple Ridge, Regal Elmwood, Regal Niagara Falls, Regal Quaker, Regal Transit, Regal Walden Galleria

INTERSTELLAR—That Christopher Nolan’s magnum opus, about the search for a planet capable of supporting human life, is the most argued-about movie of the year has less to do with reaction to its content than with its inconsistency. Your own opinion likely to hinge on what you most want in a movie, visual effects, provocative ideas or fleshed-out drama. The ideas are there, though whether they’re plausible or merely fantastical is likely to be over the heads of most viewers. Nolan and his co-scripter brother Jonathan alternately withhold information that you want (about the demise of our planet in the near future) while rushing science at you too quickly to digest. Matthew McConaughey performance demonstrates that it’s possible to overact quietly, though he’s still effective in the occasional tear-jerking moments. It’s worth seeing, but don’t expect anything as dazzling as The Dark Knight or Inception. With Anne Hathaway, Jessica Chastain, Michael Caine, Matt Damon, John Lithgow, Casey Affleck, and Topher Grace. (MF) Flix, Maple Ridge, Regal Elmwood, Regal Niagara Falls, Regal Quaker, Regal Transit, Regal Transit, Regal Walden Galleria

THE JUDGE—As you might expect in a dramatic offering from auteur David Dobkin, best known for Vince Vaughn vehicles like Fred Claus and The Wedding Crashers, this is insistent hokum, grabbing your lapels to get your involvement and sympathy. Robert Downey Jr. gives a technically impressive but emotionally uninvolving performance as a cynical big city trial attorney defending his cranky father (Robert Duvall), a small town judge accused of vehicular homicide. Duvall still has his acting chops, and he sometimes manages to evoke a dignity and sympathy that the movie doesn’t really deserve. Between the overheated, dysfunctional family complications and the courthouse collisions, the movie has a certain crude power, but 140 minutes of it is mostly exhausting. With Vera Farmiga, Billy Bob Thornton, Vincent D’Onofrio, Dax Shepard and Grace Zabriskie. (GS) Four Seasons, McKinley, Movieland

THE MAZE RUNNER—Yet another movie adaptated from a series of dystopian teen novels. Four Seasons, McKinley

NIGHTCRAWLER—It could be called Skincrawler for Jake Gyllenhaal’s viscerally creepy performance as sociopath Lou Bloom, pitched somewhere between Travis Bickle and Rupert Pupkin. (A younger Robert DeNiro would clearly have been the first choice for the role.) An LA bottom feeder looking for a path to success, Bloom finds it selling video footage of crime and accident scenes to a television station where the overnight news director (Rene Russo) is desperate to save her career. Writer/director Dan Gilroy keeps his examination sharply focused, shooting mostly at night on streets that crackle with danger and excitement. Bloom’s recitations of speeches learned from internet self-improvement classes add a satirical edge to story that is no less unsettling for being somewhat obvious. With Riz Ahmed and Bill Paxton. (MF) Regal Elmwood, Regal Niagara Falls, Regal Quaker, Regal Transit, Regal Walden Galleria

ST. VINCENT—Bill Murray may shout to the heavens that he doesn’t want an Academy Award, but it’s hard to see this mawkish comedy-drama as anything other than a calculated shot at an Oscar. His performance is fine enough, but there’s only so much you can expect from a story about a curmudgeon saved from a life of whoring and gambling by his friendship with a lonely boy who movies in next door with his harried mother (Melissa McCarthy). Plausibility is never the film’s strong point, but contrived finale is so shameless that it looks like an old SNL parody. Written and directed by Theodore Melfi. With Naomi Watts, Chris O’Dowd and Terrence Howard. (MF) Amherst, Regal Elmwood, Regal Niagara Falls, Regal Quaker, Regal Transit, Regal Walden Galleria

THE THEORY OF EVERYTHING—As an Oscar contender, this biography of Stephen Hawking, based on a memoir by his first wife Jane, is a model of restraint and inoffensiveness: it’s a shoo-in for the The King’s Speech voters. Hawking’s work takes a back seat to his slow debilitation from ALS and the history of his marriage. But while we go into the film knowing it will end in divorce, the factors driving the couple apart feel elided. It’s as if the filmmakers didn’t want to be disrespectful to a man who is considered one of the great scientific minds of our era. But in that case, why make the film at all? Even the irony that, as presented here, all that ended the marriage of a man so obsessed with the nature of time was time itself seems unintended. With fine but unostentatious performances by Eddie Redmayne and Felicity Jones as the Hawkings. Co-starring Harry Lloyd, David Thewlis, and Emily Watson. Directed by James Marsh, best known for documentaries like Man on Wire. (MF) Amherst, Eastern Hills

THIS IS WHERE I LEAVE YOU—Watching Jason Bateman as a poor schlub trying to navigate the plots and plotzing of his toxically narcissistic and criminally unreliable Jewish family, you may be forgiven for thinking you’ve wandered into an alternate world version of TV’s Arrested Development. Assembled to sit shiva after the death of their atheist father three brothers, a sister, spouses, and at least temporarily significant others, crowded into the family home to trade angry best-kept-secret revelations and accusations, and, of course, reach long-delayed conciliations. The movie barrels along on a steady supply of crass, crude, scatological and otherwise offensive humor, much of which works in a crazy burlesquing way, at least until it ill-advisedly tries to mix sentimentality and poignance into the vulgarity. With Jane Fonda, Tina Fey, and Rose Byrne. Directed by Shawn Levy (The Pink Panther remake). (GS) McKinley

WHIPLASH—Inspired by his own experiences at a musical conservatory, writer-director Damien Chazelle’s film about an obsessed drum student and his even more obsessive teacher takes its cues less from movies about the arts or academics than the military, starting in An Office and a Gentleman territory before plunging unexpectedly toward Full Metal Jacket. An excellent performance by Miles Teller as the student is overshadowed by J.K. Simmons in the role of a lifetime as the teacher who believes in pushing students past what they think their limits are. The finale arguably undercuts everything the rest of the movie stands for, but it’s so well executed it’s hard to complain. (MF) Amherst, Eastern Hills